1st Inning: Haythorn works out of 1st inning jam on the mound, Noffsinger leads off with full-count double and scores on Rice single, Reds lead 1-0

7th Inning: Kindvall records two quick outs then surrenders a HBP and base hit before ending the game on a popout to catcher Anderson, Reds win 9-1

1st Inning: Noffsinger walks, Winter singles, Rice drives in a run and Anderson doubles to knock in another run, Martin shuts down Rocky Ford with 2 strikeouts to end the inning , Reds lead 2-0

2nd Inning: Danley walks, Prior singles, Kundert sacrifices them into scoring position before Noffsinger and Winter walk, and Rice and Martin single to drive in runs, Martin allows 2nd walk of game, but doesn't allow ball hit out of the infield to retire the side, Reds lead 7-0

3rd Inning: With two outs, Noffsinger walks and steals 2nd base, Winter drives him in with a single, and Anderson knocks in Winter with another single, Martin walks leadoff batter on full count and following Rocky Ford's first hit of the game, that leadoff batter scores the first run as well, Reds lead 9-1

4th Inning: Danley, Prior, and Kundert single, Noffsinger reaches on centerfielder's error, and Winter singles in two more runs, Noffsinger throws out runner at the plate as Martin gets out of the inning unscathed despite 3 hits allowed, Reds lead 13-1

Game Highlights: Martin was nearly unhittable when the game was close, which wasn't for long thanks in large part to Noffsinger reaching base for the 8th time on the day with 7 runs scored in only 11 innings of offense played

1st Inning: Winter doubles and steals third base before Rice and Anderson single to each knock in a run, Martin retires the side in order on just 7 pitches, Reds lead 2-0

2nd Inning: Reds fail to capitalize on Noffsinger two-out walk and steal of 2nd base, Martin gets out of bases loaded jam with a popout and strikeout, Reds lead 2-0

3rd Inning: Rice reaches on error, Anderson walks, and with two outs, Danley hits 3-run home run, Martin gets a strikeout and then a double play to finish the inning after a walk, Reds lead 5-0

4th Inning: Reds go 3-up 3-down, Martin gets out of another bases loaded jam with groundout to Winter, Reds lead 5-0

5th Inning: Rice and Anderson single, Haythorn reaches on error, Danley and Prior walk, Kundert singles, Noffsinger walks, Rice doubles, Anderson walks, and Martin singles to cap off a 9-run inning, Martin allows single and after a couple wild pitches that allow the runner to score, Martin induces double play and a strikeout to end the game, Reds win 14-1

Game Highlights: Danley's 3-run home run put the game out of reach with Martin on the mound, but the Reds' 9-run 5th inning outburst is what allowed Martin to come back the following day in the State Championship game without many pitches on his arm

1st Inning: Kindvall allows a hit but then induces a double play and groundout, Reds were retired in order, game tied 0-0

2nd Inning: A bases-loaded fielder's choice with one out put the Reds behind for the only time all postseason, and the Reds went down in order again, Reds trail 0-1

3rd Inning: Kindvall records two quick outs and then after a single, induces a groundout, Prior walks, Kundert singles, and Winter delivers 2-out single to knock in Prior, game tied 1-1

4th Inning: Martin takes the mound and sets Olathe down in order, Martin, Haythorn and Danley single to put the Reds up by a run, then Haythorn running from third base induces a balk to score as well, Reds lead 3-1

5th Inning: Martin records two quick outs, then after a single, Martin follows it with a strikeout, the Reds are then set down in order, Reds lead 3-1

6th Inning: Martin again records two quick outs, then allows a walk, and then induces a groundout, the Reds strand a runner on 1st base, Reds lead 3-1

7th Inning: With two runners on base and no outs, Martin fields a sacrifice bunt cleanly to record the first out, with the previous day's hero (in Olathe's miracle comeback win over Roosevelt) at the plate for Olathe, Martin sets him down on 3 pitches for the 2nd out, and then strikes out Olathe's next batter on 3 pitches as well to end the game, Reds win 3-1

Game Highlights: Martin was absolutely dominant following a strong start by Kindvall, the Reds' pitching staff completed the postseason without ever allowing more than one run in a game 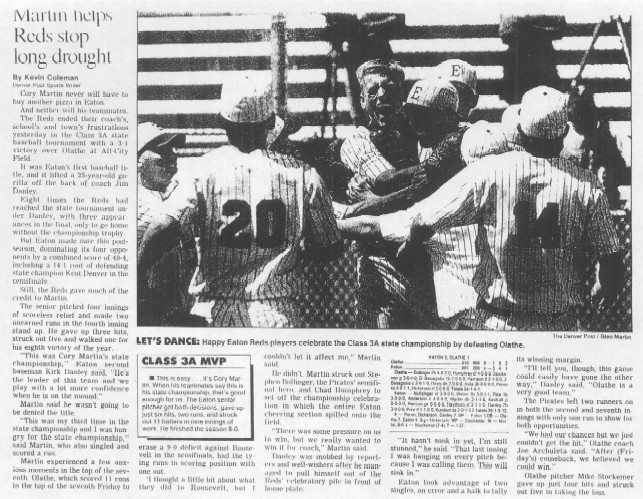 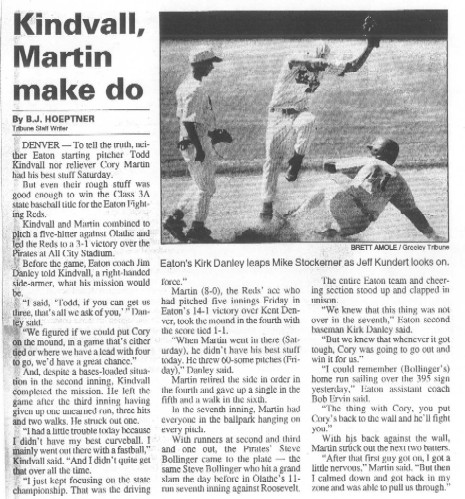 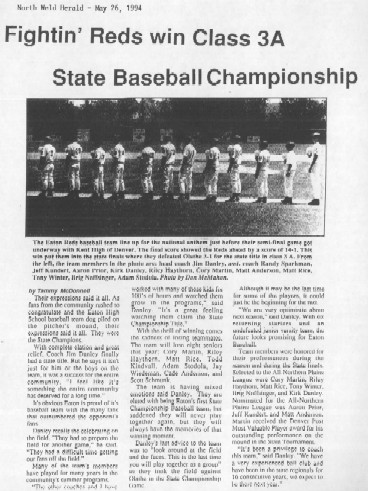 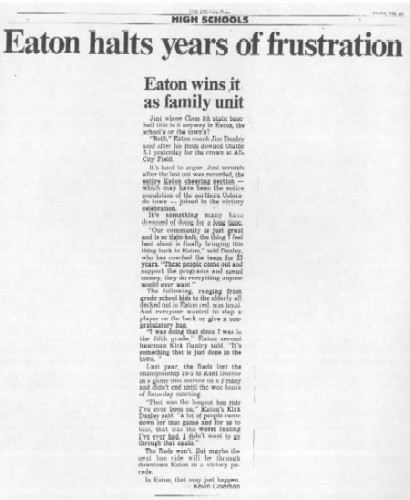 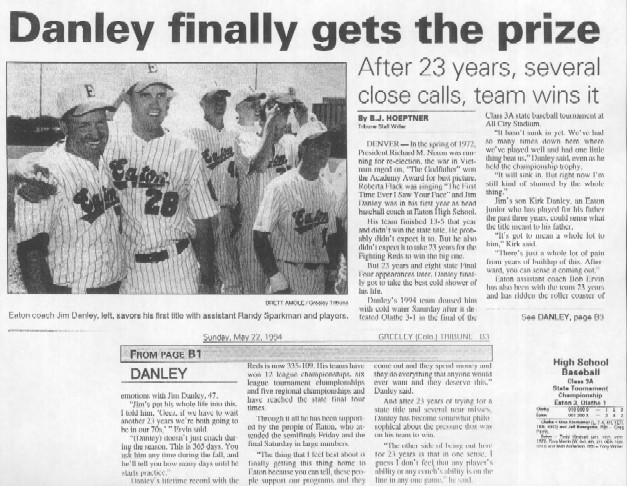 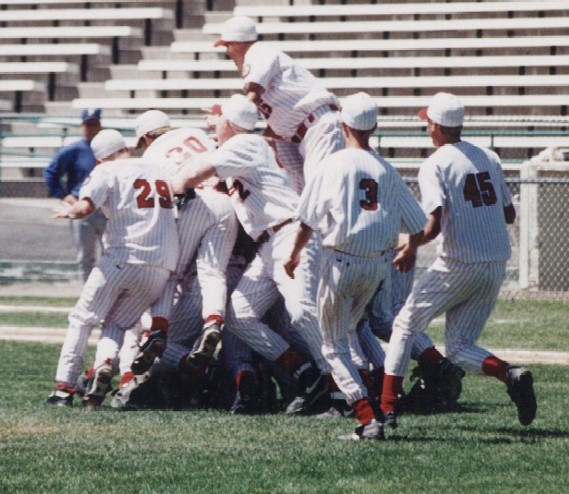 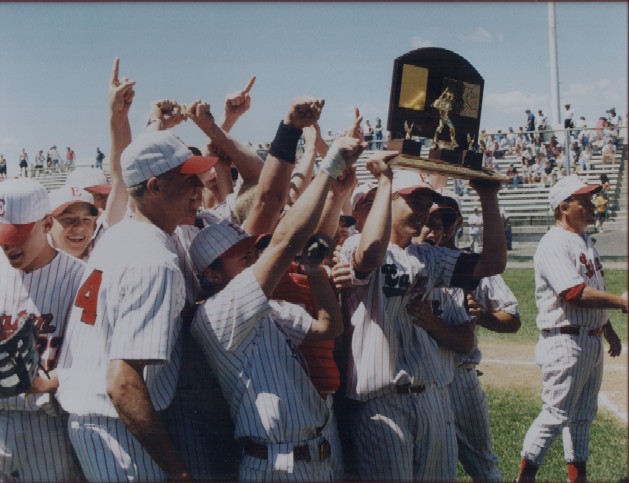 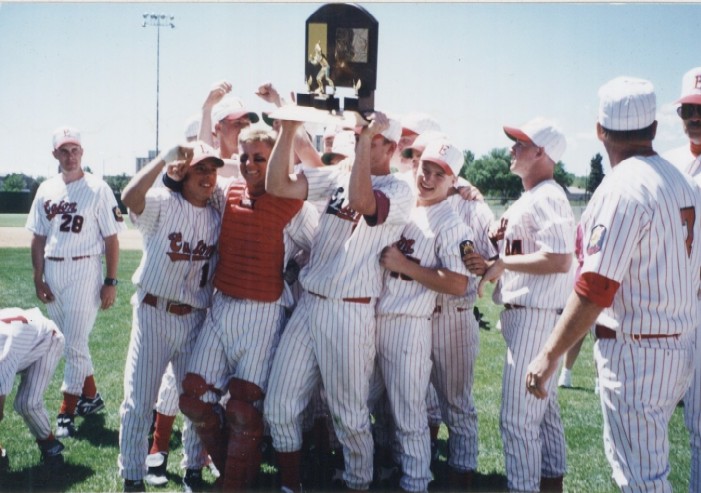 Back Row (from left to right):

Front Row (from left to right):