1st Inning: Frank allows a single and two hits to put Meeker ahead 2-0, but the Reds offense comes back with a 6-pitch walk to Noffsinger, a 7-pitch walk to Danley, a double by Anderson and a 2-run home run by Shelton, followed by a 2-out hit from Kundert, a walk by Barber, Kinoshita reaches on an error, then Noffsinger, Danley and Winter all single to score the 8th run of the inning, Reds lead 8-2

2nd Inning: Frank strikes out the side in order, the Reds fail to capitalize on a single by Shelton, Reds lead 8-2

3rd Inning: Frank again sets down the side in order, then Kinoshita walks, Noffsinger reaches on a fielder's choice, Danley doubles, Winter singles, and Anderson hits a 2-run home run, before 2-out hits from Prior and Kundert and a double by Barber cap off a 6-run inning, Reds lead 14-2

4th Inning: Frank gets two quick outs, then allows a walk but induces a groundout by the next batter to get out of the inning, Noffsinger walks, Winter reaches on an error, Anderson hits another 2-run home run, Shelton and Prior single, Kundert walks, Barber singles, Adams walks, Drovdal reaches on an error, and Hager and Anderson single to cap off a 9-run inning, Reds lead 23-2

5th Inning: Frank allows a walk but then retires the next three batters in order with strikeouts of the final two batters to secure the win, Reds win 23-2

Game Highlights: Anderson's offensive display with 4 hits, including 2 home runs and 8 RBI led the way for the Reds

1st Inning: Shelton allows a leadoff walk but then gets a strikeout and induces a double play turned by Kundert to end the top of the inning, Noffsinger, Winter and Anderson walk and Noffsinger scores on a wild pitch to give the Reds their first run, Reds lead 1-0

2nd Inning: Shelton gets a strikeout and then with the bases loaded induces a double play turned by Danley and Kundert to get out of the scoring threat, Kundert singles, Kinoshita and Noffsinger walk, Winter is hit by a pitch, Anderson singles, Shelton doubles, Prior reaches on an error, and Kundert delivers 2nd single of the inning to give Reds a commanding lead, Reds lead 7-0

3rd Inning: Shelton allows a one-out walk, but Noffsinger makes great play in centerfield and doubles off the runner at first base to end the inning, the Reds strand Noffsinger at 2nd base after a walk, Reds lead 7-0

4th Inning: Shelton strands a runner on 2nd base with a strikeout to end the top of the inning, Anderson leads off with a home run, Shelton and Kundert single but are left stranded, Reds lead 8-0

5th Inning: Shelton strands runners on first and second base and induces a flyout to Noffsinger to end the threat, Danley singles and Anderson doubles and scores on ball hit by Shelton to end the game via the 10-run mercy rule, Reds win 10-0

Game Highlights: Game Highlights: Shelton was dominant in scattering just four hits and got out of two scoring threats early in the game by inducing double plays, Anderson capped off a day in which he ended 7-for-8 with 12 RBIs and 6 runs scored in only 9 innings of offense played in one of the single best offensive displays in Eaton postseason history

1st Inning: The Reds fall behind with a hit and some 2-out walks in the top of the first inning but Shelton ends the threat with a strikeout to strand runners at first and third, the Reds hitters go down in order, Reds trail 0-2

2nd Inning: Shelton allows a hit by pitch and base hit to give up a third run before stranding a runner at third base with a groundout to Kundert to end the threat, Anderson and Prior walk but the Reds leave them stranded, Reds trail 0-3

3rd Inning: Shelton induces three groundouts to retire the side in order, Noffsinger walks, Danley singles, Winter walks, Anderson singles, Shelton and Kundert walk and Prior hits a sacrifice fly to give the Reds the lead, Reds lead 4-3

4th Inning: Shelton gets two quick outs and then yields a single before a flyout to Barber ends the top of the inning, Benson walks, Noffsinger triples, and Danley hits a sacrifice fly, Reds lead 6-3

5th Inning: After allowing a hit and a run on a sacrifice fly, Shelton strands a runner at third base with another strikeout, with two outs, Barber and Benson reach base, Noffsinger walks, Danley reaches on an error, and Winter singles to give the Reds a commanding lead , Reds lead 10-4

6th Inning: Shelton records three popouts to retire the side in order, Kundert walks, Prior doubles, and Barber and Noffsinger single, Reds lead 12-4

7th Inning: Gesick enters the game in relief to save pitches for Shelton in the State Title game later in the day, and sets Kent Denver down in order with a flyout to Shelton in rightfield to end the game, Reds win 12-4

Game Highlights: Shelton struggled a little early, but was dominant as the Reds' bats came alive, though with only 7 hits on the day, the Reds had to draw walks and manufacture runs with sacrifice flies to secure the victory as Noffsinger led the Reds with 3 runs scored on two hits and two walks

1st Inning: Gesick allows a leadoff full-count walk, but gets a lineout to Danley who doubles off the runner at first, followed by a groundout to Winter to end the top of the inning, Danley walks, and then with 2 outs, Anderson draws a 7-pitch walk, Shelton walks, and Kundert draws a bases-loaded full-count walk to put the Reds ahead, Reds lead 1-0

2nd Inning: Gesick gets three quick outs with a couple groundballs including a double play turned by Kundert and Danley to end the top of the inning, the Reds strand Benson at third base following a walk, Reds lead 1-0

3rd Inning: Following a double and a walk, Shelton enters the game and with runners on 2nd and 3rd base after a wild pitch, induces a popout to Prior, a groundout to Prior in which he looks back the runner at third base, and then a groundout to Kundert to end the threat, the Reds are retired in order, Reds lead 1-0

4th Inning: Shelton allows one walk but gets two popouts and a strikeout to strand the runner at first, following a walk by Prior, Barber doubles but Prior is thrown out at the plate trying to score an insurance run for the Reds, Reds lead 1-0

5th Inning: Following a leadoff single, Shelton records a strikeout and then a double play is turned by Danley on a line drive that doubles off the runner at first base, the Reds go down in order, Reds lead 1-0

6th Inning: Following a one-out single, a double ties the game up in the top of the inning before Shelton records a strikeout and a groundout to Kundert to strand the would-be go-ahead run at third base, Kundert leads off with a full-count walk and then moves to 2nd base on a perfect sacrifice bunt by Prior, then moves to third base on a wild pitch, before Barber hits a high popfly in right-centerfield that Kundert tags up on and scores the go-ahead run, Reds lead 2-1

Game Highlights: Gesick was strong and Shelton came in to shut the door, Reds' pitchers only recorded 4 strikeouts on the day, and utilized instead the Reds' nearly flawless infield defense which turned 3 double plays, offensively the Reds had only one hit in the game and were thrown out trying to score on that hit, but scored by drawing walks and using a sacrifice bunt, wild pitch, and sacrifice fly to score the winning run 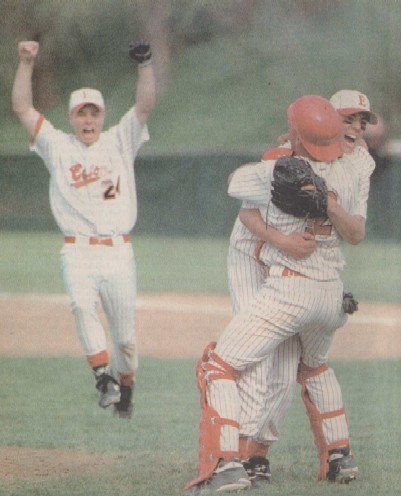 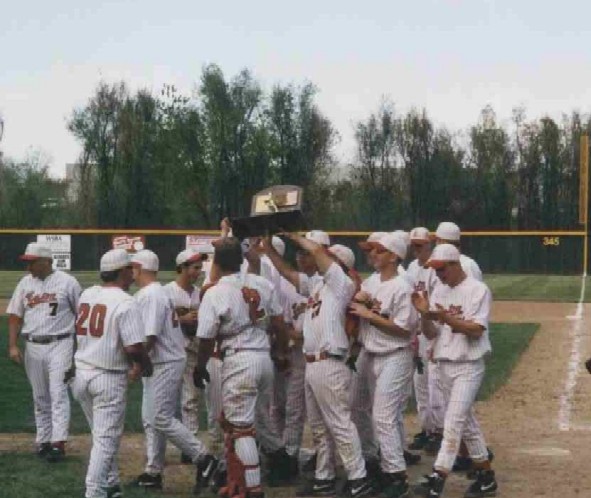 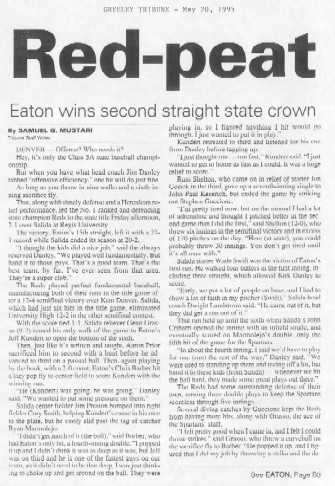 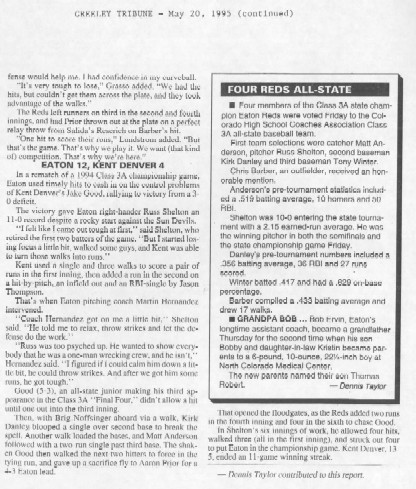 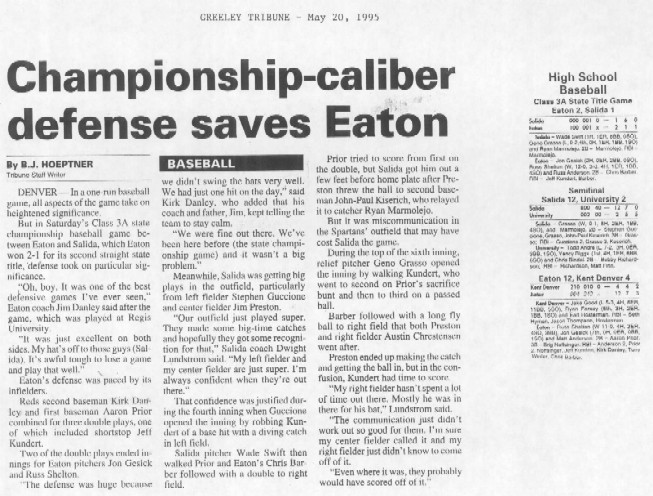 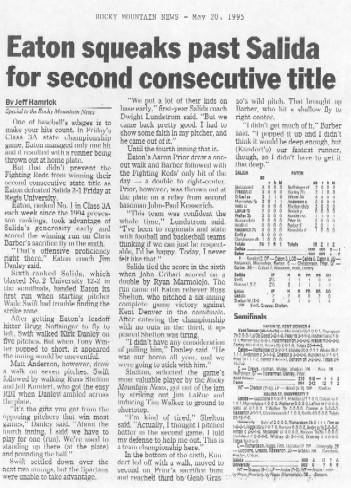 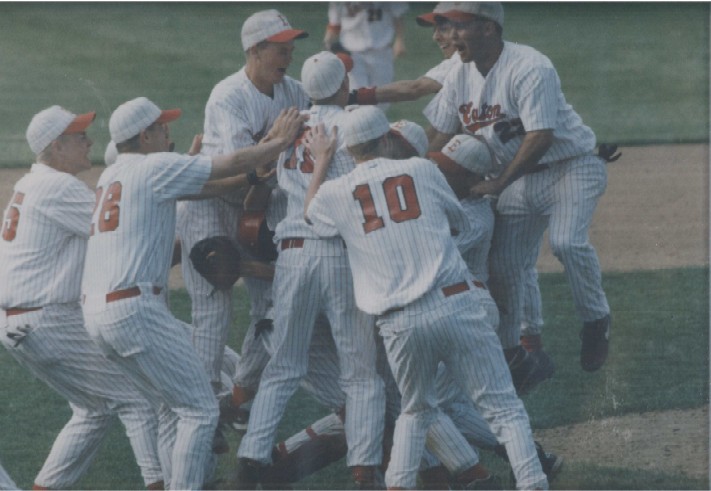 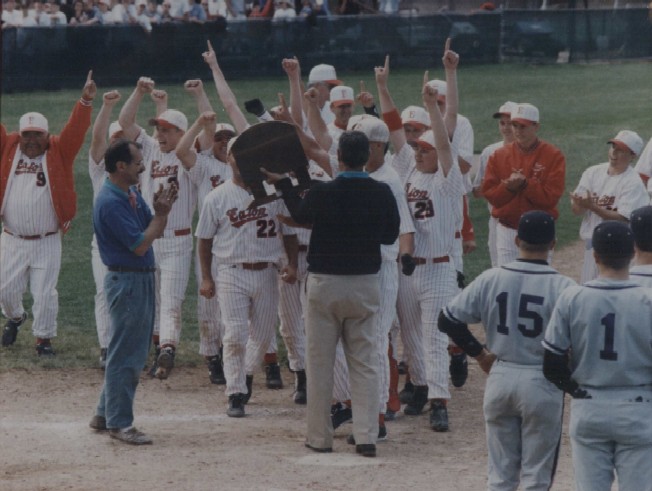 Strikeout With Tying Run on Base 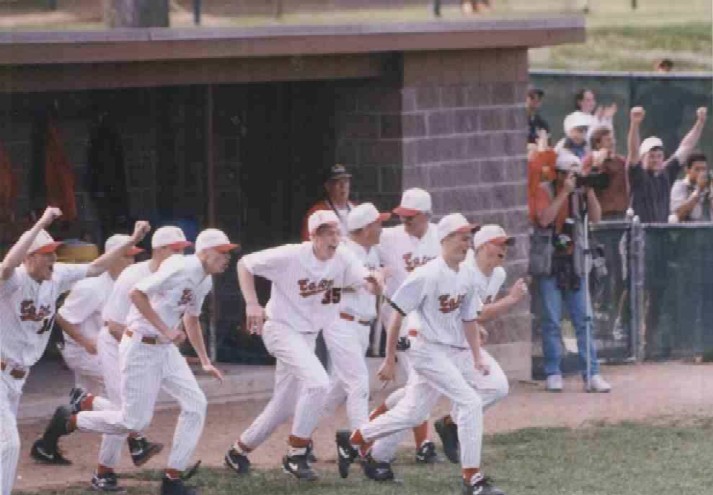 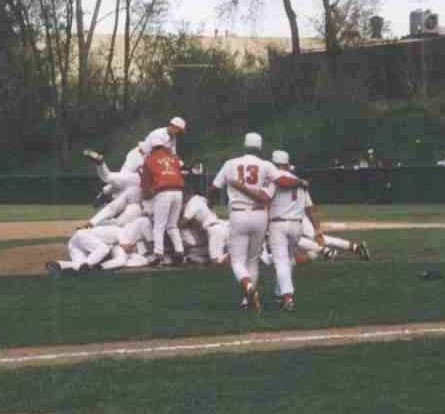 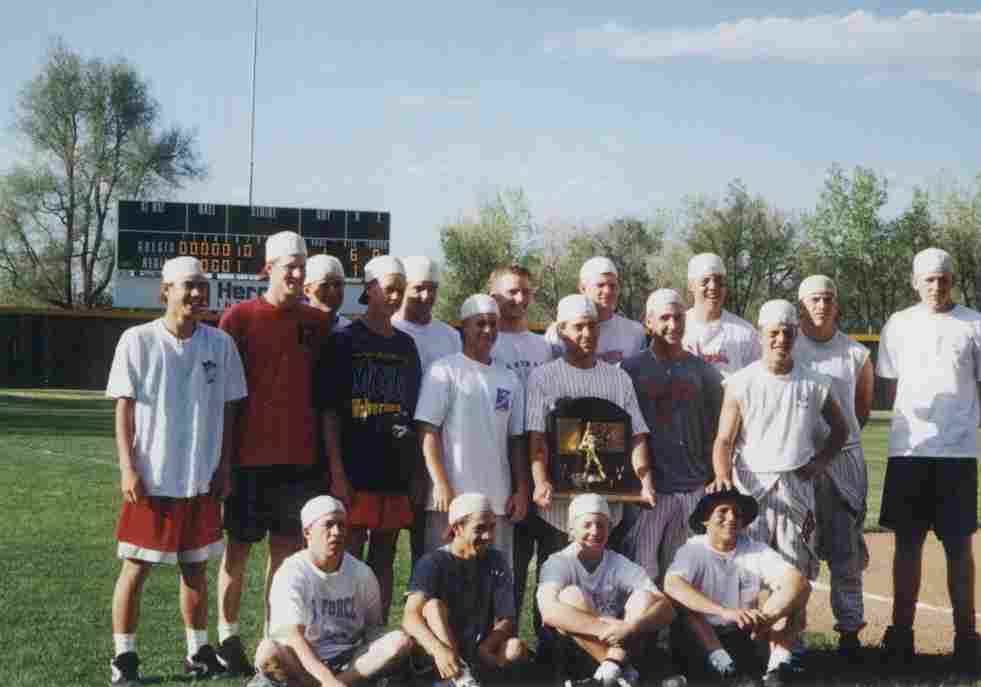 Standing (from left to right):

Sitting (from left to right): 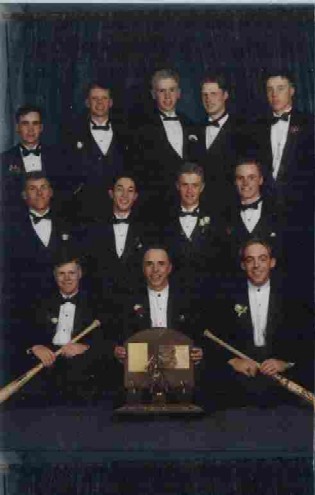