1st Inning: Ochoa strikes out the side in the top of the first, Carrasco walks but is left stranded at first base, Reds tied 0-0

2nd Inning: Ochoa retires the side in order again, Loftis, Hagen, and Stanclift lead off with singles, Wiederspan walks, and Thompson grounds into a fielder's choice to score the 2nd run of the inning, Reds lead 2-0

3rd Inning: Ochoa stays perfect through 3 innings by striking out the side again, Carrasco singles, Hughes reaches on an error, and Loftis, Hagen, and Stanclift single again to score 3 runs for the Reds, Reds lead 5-0

4th Inning: With two outs, the perfect game is broken up by a 2-strike single, but then Ochoa induces a flyout after a walk to end the top of the inning, Thompson draws a full-count leadoff walk, Smith triples, Meyers singles, and Hughes, Loftis, and Hagen single again to score 4 more runs, Reds lead 9-0

5th Inning: Ochoa retires the side in order after throwing only his 70th pitch of the game after striking out 8 of the first 10 batters of the game, Thompson leads off the bottom of the inning with a solo home run to end the game via the mercy-rule for a rare walk-off postseason home run for the Reds, Reds win 10-0

Game Highlights: Ochoa barely missed a perfect game on the mound in a dominant performance, while Loftis and Hagen were each a perfect 3-for-3 at the plate with Loftis leading the Reds with 3 RBI

1st Inning: Smith sends the first pitch of the game over the wall to take a 1-0 lead, before the Reds surrender a 2-out run to tie the game on back-to-back singles in the bottom of the inning, Reds tied 1-1

2nd Inning: Stanclift leads off the 2nd inning with a home run to take the lead back, and Mininger strands a runner on first base to end the inning, Reds lead 2-1

3rd Inning: Meyers leads off the inning with a home run to make it a remarkable 3rd consecutive home run to start the inning, Carrasco then doubles and scores on a ball hit by Loftis, Mininger strands runners on 1st and 2nd base with a strikeout and flyout to centerfielder Smith to end the inning, Reds lead 4-1

4th Inning: Smith singles to lead off the inning, before Meyers walks and following an out at the plate, Hughes hits a 2-run home run to increase the Reds' lead, Mininger records two outs and then allows a single before Carrasco takes the mound in relief to end the inning with a strikeout, Reds lead 6-1

5th Inning: Stanclift leads off the inning with a HBP, then Thompson, Smith, and Meyers walk, and Carrasco singles, Carrasco then records three strikeouts to end the 5th inning, Reds lead 8-1

6th Inning: Hagen leads off the inning with a double, Stanclift hits the next pitch out for his 2nd home run of the game, Wiederspan walks, and Smith, Meyers, Carrasco and Hughes all single, Carrasco then retires the side in order to end the game via the 10-run mercy rule, Reds win 14-1

Game Highlights: Mininger got out of every inning without any real damage when the game was close, and then Carrasco dominated in closing it out, the Reds' bats were alive with home runs from Smith, Meyers, Hughes, and 2 home runs from Stanclift

1st Inning: Mininger induces all groundballs to get out of the top of the first inning, while the Reds jumped all over Faith Christian right away with Smith singling, Meyers, Carrasco, and Hughes drawing walks, and Loftis, Hagen, and Stanclift singling to have each of the first 6 Reds in the lineup score to start the game, Reds lead 6-0

2nd Inning: Mininger needs only 6 pitches to retire the side in order in the top of the 2nd inning, and then with two outs, Carrasco triples, Hughes reaches on an error, Loftis walks, and Hagen triples to put the game completely out of reach, Reds lead 9-0

3rd Inning: After a single and a double, leftfielder Loftis hits Meyers for the relay to throw out a runner at the plate, then after two more singles Faith Christian scores their first run of the game, Thompson and Smith walk, and then Carrasco and Hughes hit two-out doubles to extend the lead, Reds lead 11-1

4th Inning: After the inning started with two straight hits, Tateyama entered in relief and limited the damage to 3 runs scored, the Reds went down in order on offense, Reds lead 11-4

5th Inning: Tateyama retired the side in order on just 8 pitches, the Reds went down in order again, Reds lead 11-4

6th Inning: With one run allowed in and a runner on 2nd base, Tateyama records a strikeout to end the top of the inning, Carrasco leads off with a triple on the first pitch, then Loftis triples, Hagen singles, and Wiederspan singles to extend the lead, Reds lead 14-5

7th Inning: Tateyama throws a 3-pitch inning to retire the side in order and end the game, Reds win 14-5

Game Highlights: The Reds put the game out of reach early, with the first 6 batters of the game all scoring and then adding 3 runs in the 2nd inning which was more than enough offense for Mininger and Tateyama on the mound, Carrasco led the Reds' offense with 4 runs scored on a walk, two triples, and a double

1st Inning: The Reds load the bases with no outs to start the game after hits by Smith and Meyers and a HBP by Carrasco, but strand the runners without knocking in a run, Ochoa retires the side in order to end the inning, Reds tied 0-0

2nd Inning: The Reds go down in order in the 2nd inning, after an error, Ochoa shuts down Lamar with two strikeouts and a groundout to third baseman Carrasco to strand a runner at 2nd base, Reds tied 0-0

3rd Inning: Reds go down in order, after a leadoff walk, Ochoa records a strikeout and induces a double play from Thompson to Meyers to Hagen to end the inning, Reds tied 0-0

4th Inning: Loftis hits a one-out double but is left stranded on 2nd base, Hughes throws out a would-be basestealer to record the second out before Ochoa allows a solo home run to give Lamar the lead , Reds trail 0-1

5th Inning: Thompson draws a one-out full-count walk, then Smith singles and Meyers singles to load the bases, Carrasco fouls off a 2-2 pitch and then delivers a 2-run single to put the Reds ahead, Hughes then fouls off a 1-2 pitch before singling in an insurance run, after allowing a walk and then a fielder's choice, Carrasco takes the mound with a 2-2 count and strikes out the batter looking for the 2nd out and then strikes out the next hitter to end the inning, Reds lead 3-1

6th Inning: Stanclift draws a leadoff walk and Smith reaches on an error, but the Reds strand those baserunners, Carrasco records two quick outs, then allows a walk, and then comes back with another strikeout to end the inning on a 3-2 pitch to the batter that had hit a home run in his previous at-bat, Reds lead 3-1

7th Inning: Reds go down in order, Carrasco records a flyout to rightfielder Wiederspan, then a flyout to leftfielder Loftis, and then a groundout to first baseman Hagen and Carrasco covers the base for the throw to end the game, Reds win 3-1

Game Highlights: Ochoa and Carrasco were both simply dominant in a game where the opposing pitcher was expected to have that kind of outing and be drafted, Carrasco's 2-run single won the game and Hughes' RBI single added an insurance run that wouldn't even be needed as Carrasco shut down Lamar late in the game to complete a perfect season for the Reds with a win in by far the most challenging game of the season 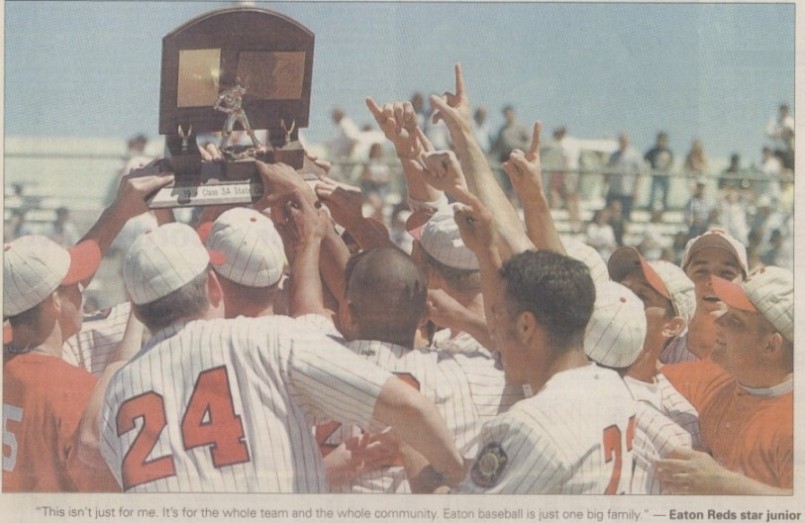 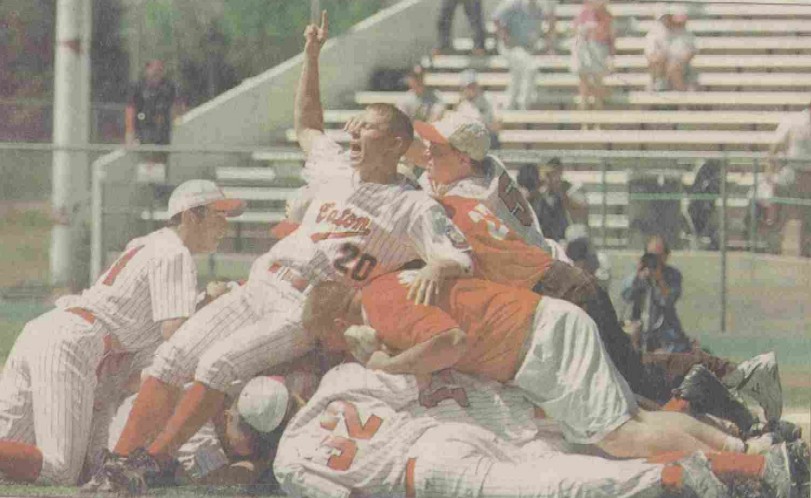 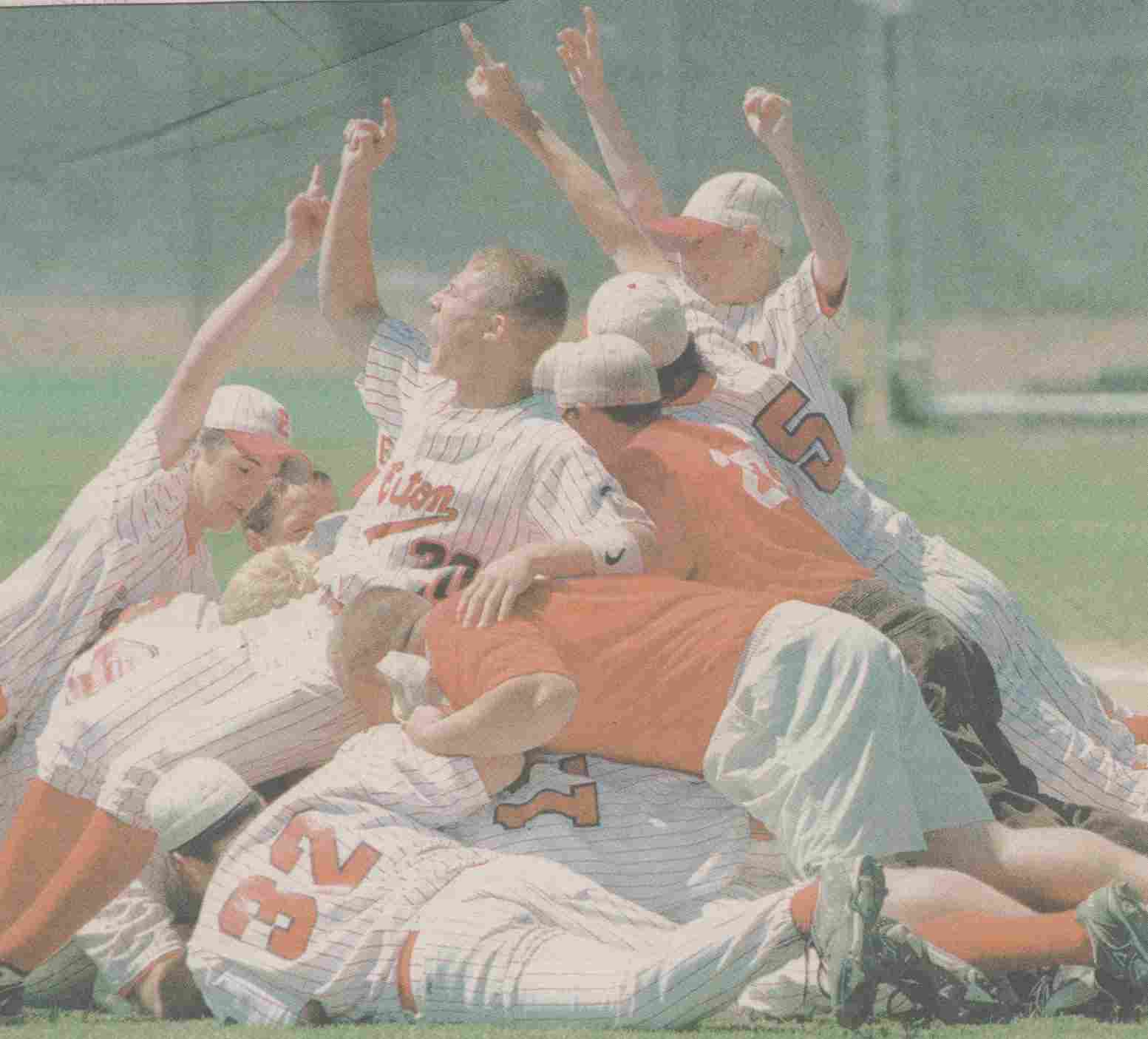 Groundout to First Base 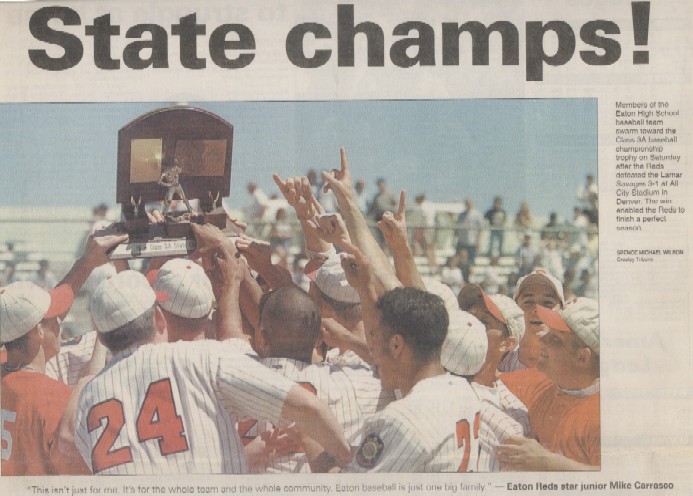 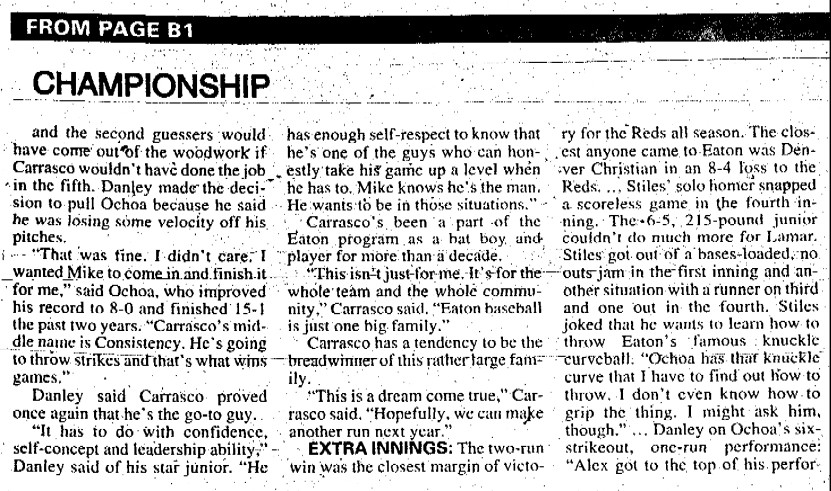 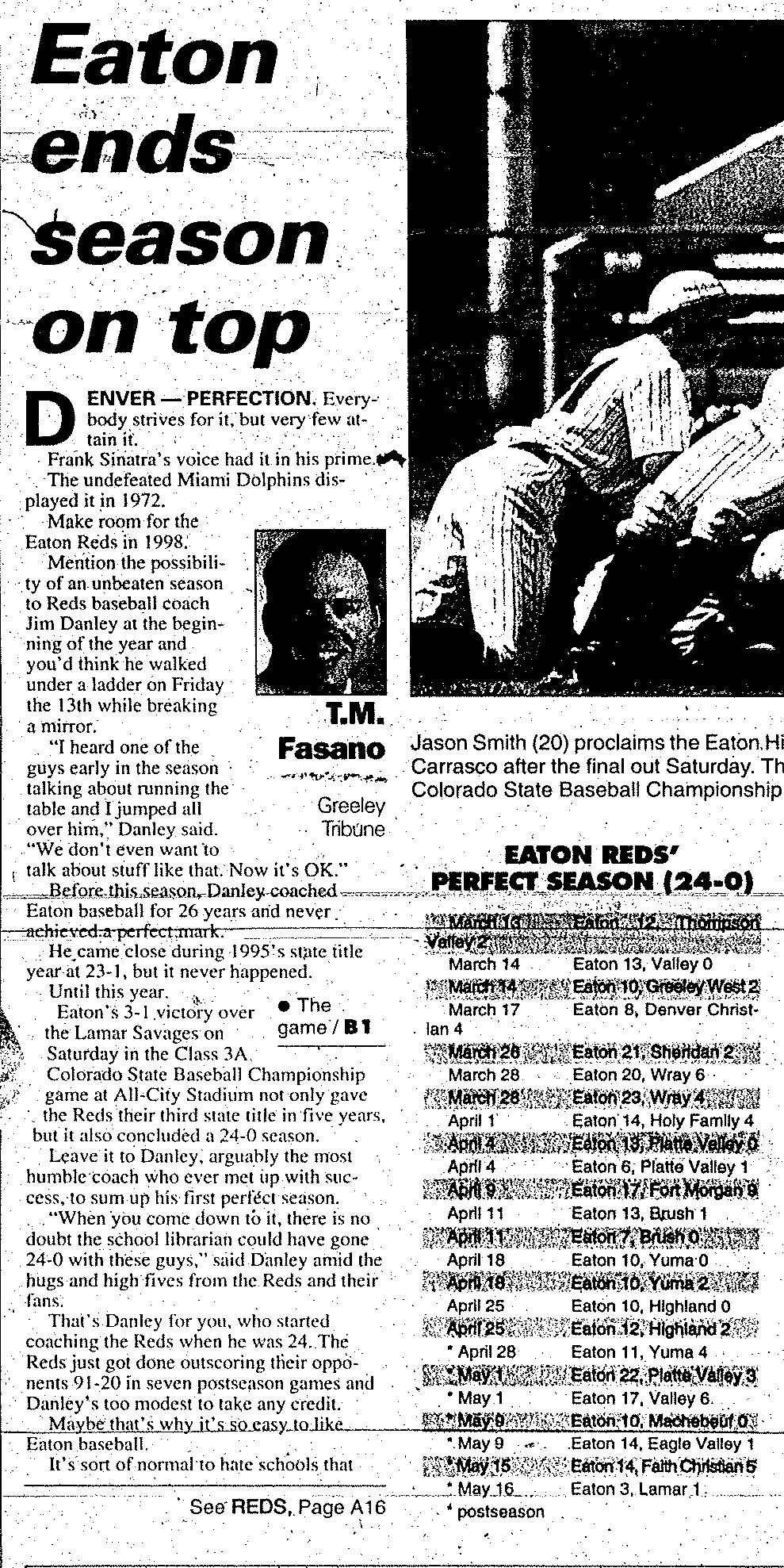 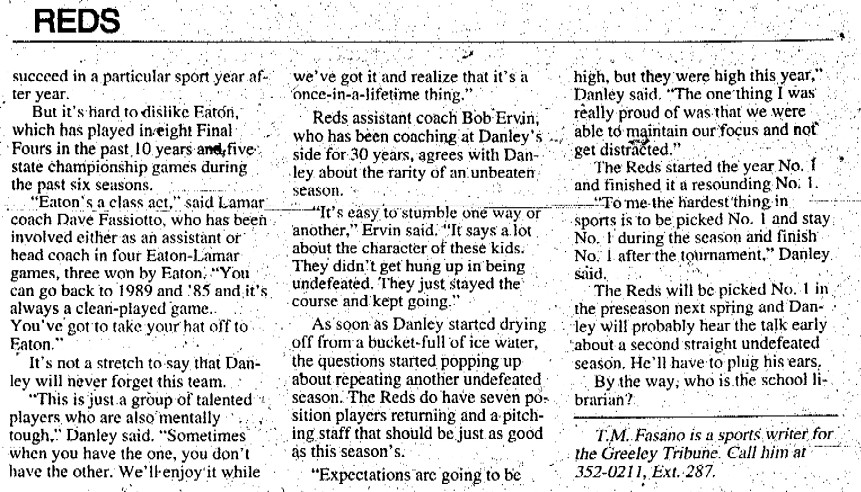