1st Inning: Kelly allows a run on a strikeout that bounces away from catcher Ginther and forces the Reds to throw out the hitter at first allowing the run to score from third base, Hungenberg reaches on an error and advances to second base to then score on Stanclift's single, Reds tied 1-1

3rd Inning: Kelly retires the side in order, then Ramer leads off the inning with a single, Ginther is hit by a pitch, Hungenberg singles, and Kelly hits a grand slam to give the Reds a commanding lead, Reds lead 5-1

4th Inning: Kelly strikes out the side in order, Swain singles with one out but is left stranded, Reds lead 5-1

5th Inning: After allowing two singles to start the inning, Kelly induces a double play turned by Swain and Trujillo, followed by a groundout to Stanclift to strand a runner at third base, with two outs, Stanclift singles, Kelly walks, Souther walks, Tateyama is hit by a pitch, Swain singles, Ramer is hit by a pitch, and Ginther singles to put the game completely out of reach, Reds lead 9-1

6th Inning: With a big lead, Kelly allows two solo home runs but ends the inning with a groundout that he fields himself, Trujillo walks and advances to third base but is left there, Reds lead 9-3

7th Inning: Kelly induces a groundout to third baseman Swain, then records a strikeout, followed by one last groundout to Swain to end the game, Reds win 9-3

Game Highlights: Kelly was clearly the story, not only leading the Reds with a dominant performance on the mound, but also hitting a grand slam that put the game firmly in Eaton's hands in the 3rd inning

1st Inning: Ayers strikes out the side, Ginther reaches on an error and advances to 2nd base to then score after a single by Hungenberg and a sacrifice fly by Stanclift, Reds lead 1-0

2nd Inning: Ayers allows a single, but then retires the next 3 batters in order to strand the runner at 2nd base after a stolen base, Tateyama singles but is left stranded at 2nd base, Reds lead 1-0

3rd Inning: Ayers allows a walk and then after a two-out infield error followed by a walk, is faced with a bases-loaded threat, but strikes out the cleanup hitter to end the top of the inning, Hungenberg hits a 1-out solo home run and Trujillo and Stanclift single, but are left on base to end the inning, Reds lead 2-0

4th Inning: Ayers strikes out the leadoff batter on an 8-pitch at-bat, then after a walk, induces a groundout and strikeout to strand the runner, with two outs, Swain singles and later scores on a throwing error by the catcher, Reds lead 3-0

5th Inning: Ayers strikes out two batters and then after a walk induces a groundout to third baseman Kelly, Hungenberg doubles and then scores on a double by Stanclift, who then scores after Souther is hit by a pitch and Tateyama hits a 2-out single, Reds lead 5-0

6th Inning: Ayers sets down the side in order on just 9 pitches, Hungenberg hits a 2-out single and steals 2nd base but is left stranded there, Reds lead 5-0

Game Highlights: Ayers was dominant on the mound allowing just two hits and working out of a 3rd inning bases-loaded jam with a strikeout, Hungenberg was 4-for-4 on the day with a double and home run and 2 runs scored to lead the Reds offense

1st Inning: Kelly allows a 2-out single but then records a strikeout to end the top of the inning, the Reds go down in order, Reds tied 0-0

2nd Inning: Kelly hits a batter with two outs, but then records another strikeout to strand the runner at 1st base, Stanclift reaches on an error, Kelly walks, Souther singles, but then the Reds strand the bases loaded, Reds tied 0-0

3rd Inning: Kelly catches a leadoff popout, then after a single, induces another infield popout and a strikeout, Ramer draws a leadoff walk and scores after Ginther singles and they advance on a throwing error and then Ramer scores on a balk, Trujillo knocks in Ginther from 3rd base to add another run, Reds lead 2-0

4th Inning: After allowing a leadoff walk, Kelly induces a flyout and then an inning-ending double play turned by Souther and Trujillo, Kelly then singles, Souther walks, Tateyama is hit by a pitch, and Swain hits a sacrifice fly to add another insurance run, Reds lead 3-0

5th Inning: Kelly retires the side in order, striking out the final two batters of the inning, Ginther and Hungenberg reach base but fail to score, Reds lead 3-0

6th Inning: After a leadoff hit by pitch, Kelly induces a flyout and then a double play to end the inning turned by Souther, Souther then triples, Tateyama singles, Swain and Ramer are hit by pitches, and Trujillo delivers a two-out single, Reds lead 5-0

Game Highlights: Kelly had a great performance and faced only 3 batters over the minimum, aided by flawless defense from the Reds, every inning except the last ended with either a strikeout or a double play, Trujillo singled in 2 runs and Tateyama and Swain each had an RBI as well

The Reds faced a top Major League pitching prospect that would go on the next year to turn down a scholarship to Arizona State after being drafted by the Padres and would go on to play professionally--as proud as he likely is of setting a nearly unbreakable Colorado state championship record with 24 strikeouts, the Reds are equally proud of the battle, led by pitcher Ayers, they put up against him to keep the game tied through 11 innings before winning the game against La Junta's reliever in the 15th inning. Tenacity triumphed over talent. This was likely the greatest game played in the history of Eaton Baseball.

1st Inning: Ginther was hit by a pitch and Hungenberg walked, but the Reds stranded them on base, Ayers gave up a double on a 3-1 count and then a single to allow the game's first run, but then induced a double play turned by Trujillo followed by a popout, Reds trail 0-1

2nd Inning: The Reds are struck out in order, Ayers records a strikeout but the ball gets away to put La Junta's runner on base, but then after another strikeout, Ayers induces groundouts to Souther and Trujillo, Reds trail 0-1

3rd Inning: Ginther reaches on an error with one out but is left at 2nd base, Ayers allows a one-out walk before inducing two infield groundouts to Trujillo and Souther, Reds trail 0-1

5th Inning: Tateyama singles, Swain singles, and Ginther singles to knock in Tateyama, Ayers records a strikeout, and then after a walk induces a groundout and Ginther ends the inning by throwing out a runner on a steal attempt, Reds trail 1-2

6th Inning: Kelly reaches on a one-out throwing error, but is left stranded at first base, Ayers allows a one-out single and then a walk, but induces a flyout and a strikeout to end the inning, Reds trail 1-2

7th Inning: Swain fouls off a two-strike pitch to then deliver a leadoff single, Ginther singles again and following a wild pitch and walk to Trujillo, the Reds have bases loaded but with two outs and a 1-2 pitch to Stanclift which sails high and leads to a wild pitch to tie the game, Ayers then sets down La Junta in order on just 5 pitches to send the game into extra innings, Reds tied 2-2

8th Inning: The Reds are struck out in order, Ayers records a strikeout that gets away to put a runner on first base, then after a wild pitch sends the runner to 2nd base, the Reds intentionally walk La Junta's cleanup hitter and Ayers induces a groundout to leave runners on first and third with only one out, Ayers then strikes out the next batter on 3 pitches and induces a groundout to Souther to end the threat, Reds tied 2-2

9th Inning: The Reds are struck out in order, but then Ayers strikes out La Junta in order as well, Reds tied 2-2

11th Inning: The Reds strike out in order but Swain reaches on the passed ball with two outs, but then the Reds strike out for a 4th time in the inning to end it, this was La Junta's ace's 192nd, and final, pitch of the game, after allowing a leadoff single, Ayers induces a groundout to Swain to get the lead runner, followed by two strikeouts to end the inning, Reds tied 2-2

12th Inning: Facing a new pitcher, Ginther reaches base for his 5th time of the day with a 2-strike single and then advances to 2nd base on a wild pitch, Trujillo walks with one out as well, but the Reds leave the runners stranded, Ayers gets two quick flyouts to rightfielder Ramer, and then after allowing a single, caps off a stunning 12-inning performance with a full-count strikeout for his 15th, and final, K of the day, Reds tied 2-2

13th Inning: Souther leads off with a single and after a walk to Tateyama, advances to third base on a flyout by Swain, but then was thrown out at the plate trying to score on a wild pitch, Stanclift then took the mound and recorded a strikeout, fielded a bunt, and then after a walk, recorded a full-count strikeout to end the inning, Reds tied 2-2

14th Inning: Hungenberg is hit by a pitch with one out, and then steals 2nd base, but is left there after a flyout and strikeout, after a walk is allowed, Souther enters the game and fields the sacrifice bunt to throw out the lead runner, then allows a double to rightfield but Ramer gets the ball in quickly to hold the runner at third base, after an intentional walk to load the bases with two outs, La Junta tries to steal home but Souther quickly releases the ball and Ginther applies the tag even after being interfered with by the batter to save the game and send it into the 15th inning, Reds tied 2-2

15th Inning: Tateyama singles with 2 outs and then Swain is hit by the next pitch, the Reds then put in Janssen to pinch run for Tateyama at 2nd base, and Janssen scores the go-ahead run on a ball hit by Ramer, Souther then takes the mound and induces an 0-2 flyout to Hungenberg, then a 3-2 flyout to Hungenberg, and then on a 1-2 pitch strikes out the final batter of the game to give the Reds a truly historic State Championship, Reds win 3-2

Game Highlights: In a game that lasted over 4 and a half hours, had 493 pitches thrown, saw 44 strikeouts, and lasted a state-record 15 innings, the clear star for the Reds was starting pitcher Ayers who struck out 15 batters and got out of countless potential game-ending jams in one of the grittiest performances in postseason history, Stanclift also pitched well before being relieved by Souther in a clear bunting situation and Souther made that play and ended the game for the Reds on the mound in dominant form, offensively Ginther reached base in 5 of his first 6 plate appearances and singled in the first run for the Reds, the leadoff hits by Tateyama and Swain led to the first two runs scored, and the 15th inning 2-out single by Tateyama followed by a hit by pitch to Swain to move the Reds into scoring position, followed by the ball hit by Ramer led to the remarkable win. 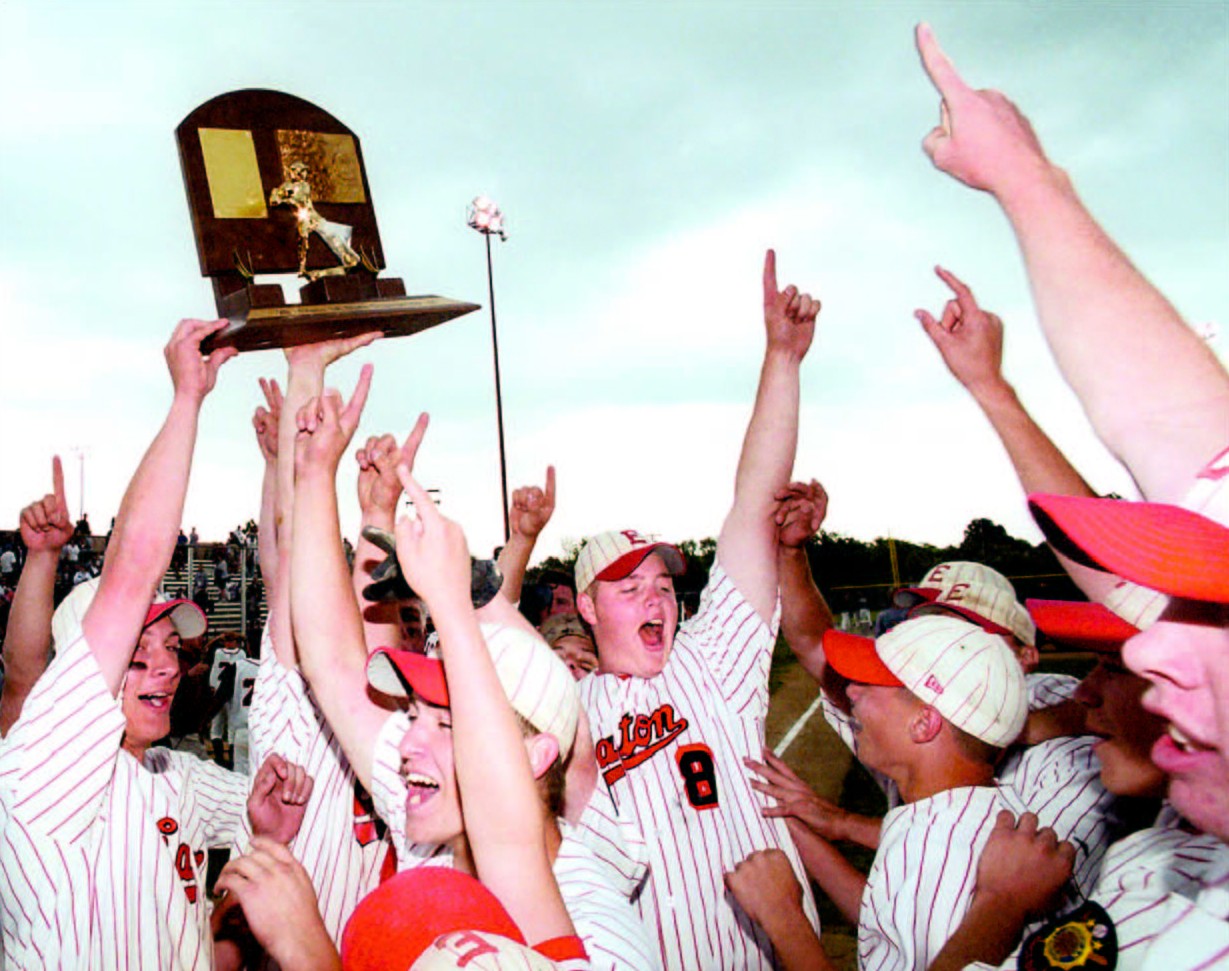 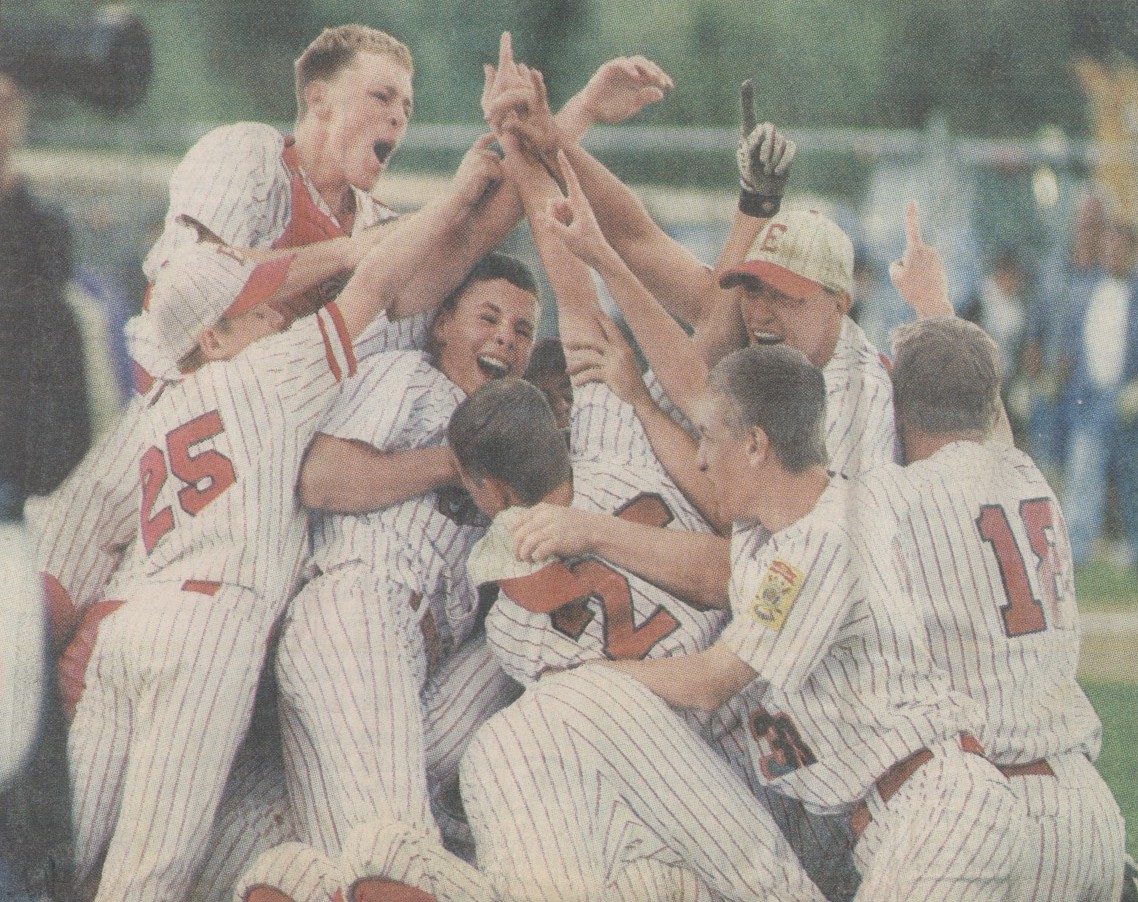 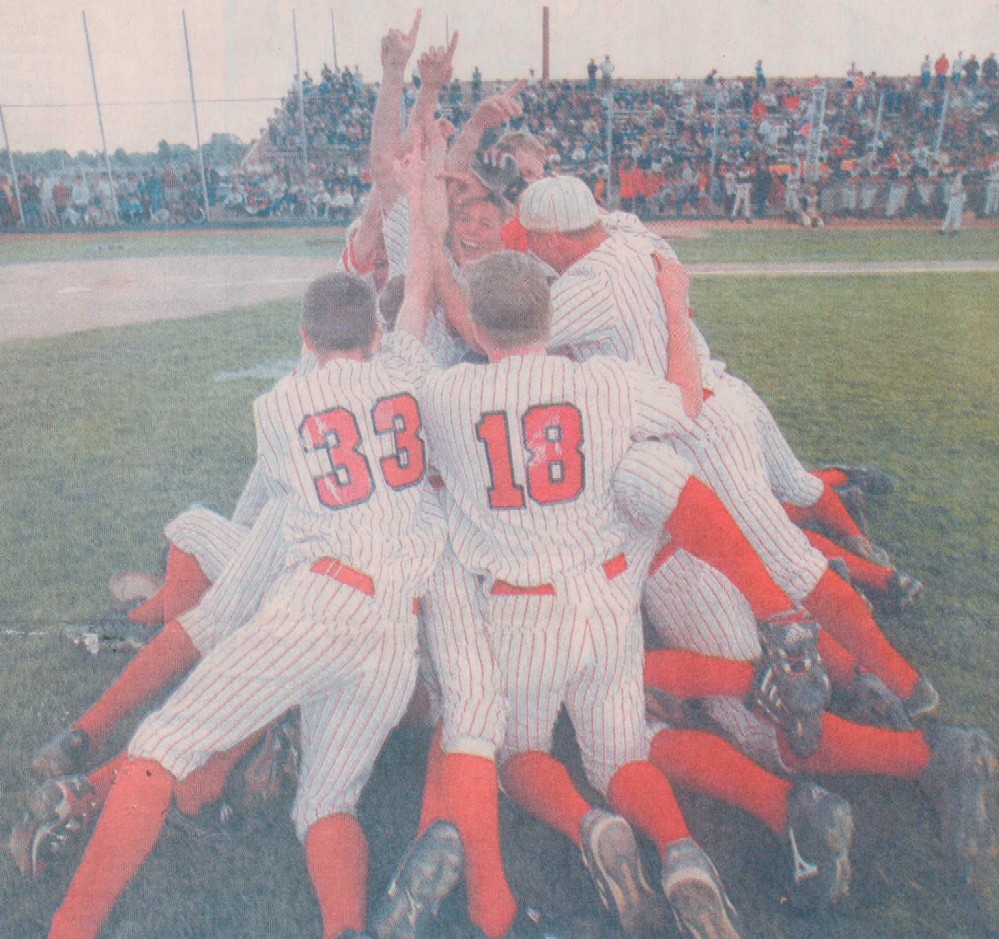 Note: Craig Ayers pitched the first 12 innings of the game

Strikeout with Potential Tying Run at the Plate 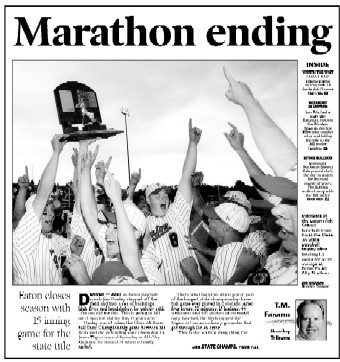 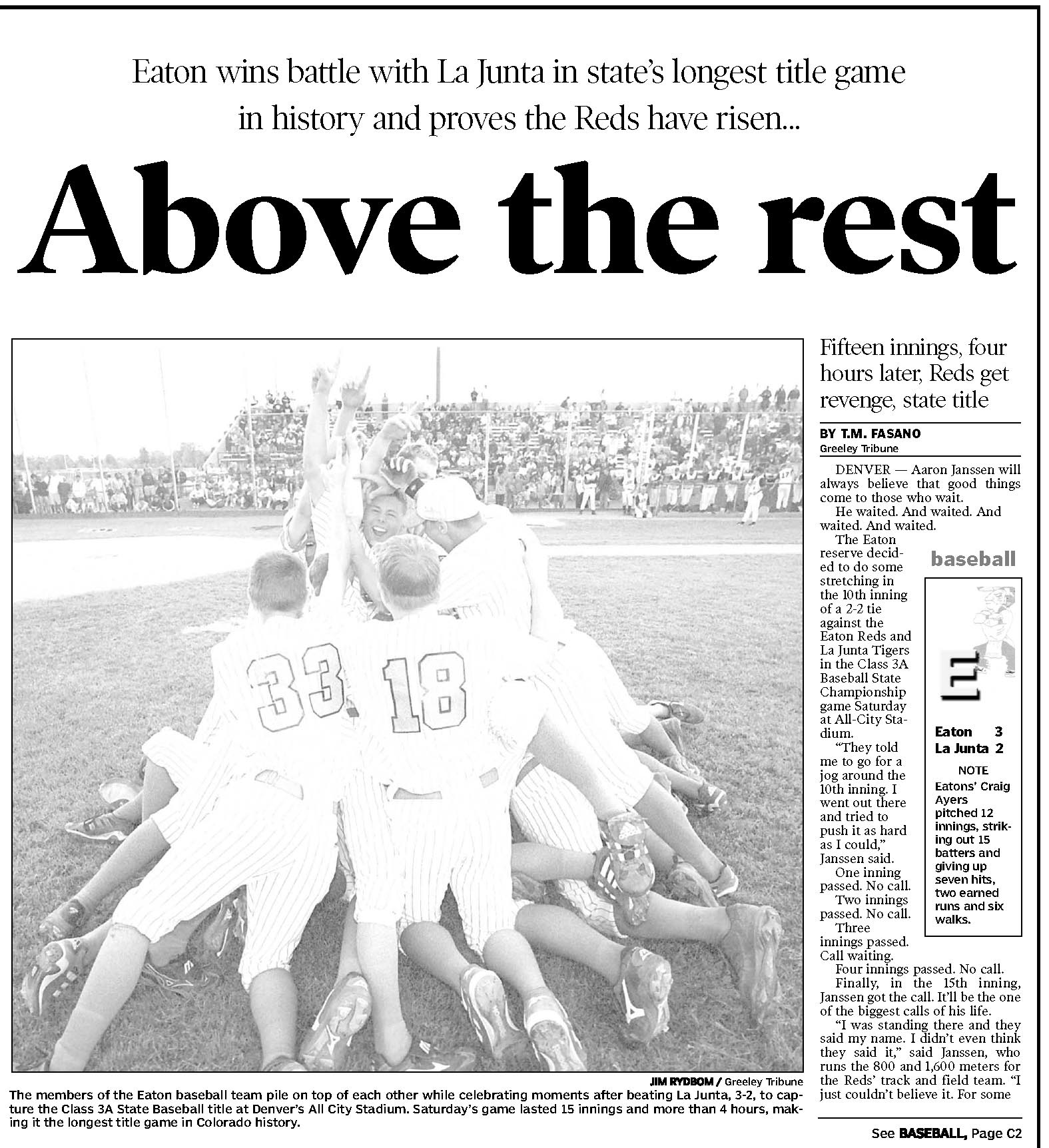 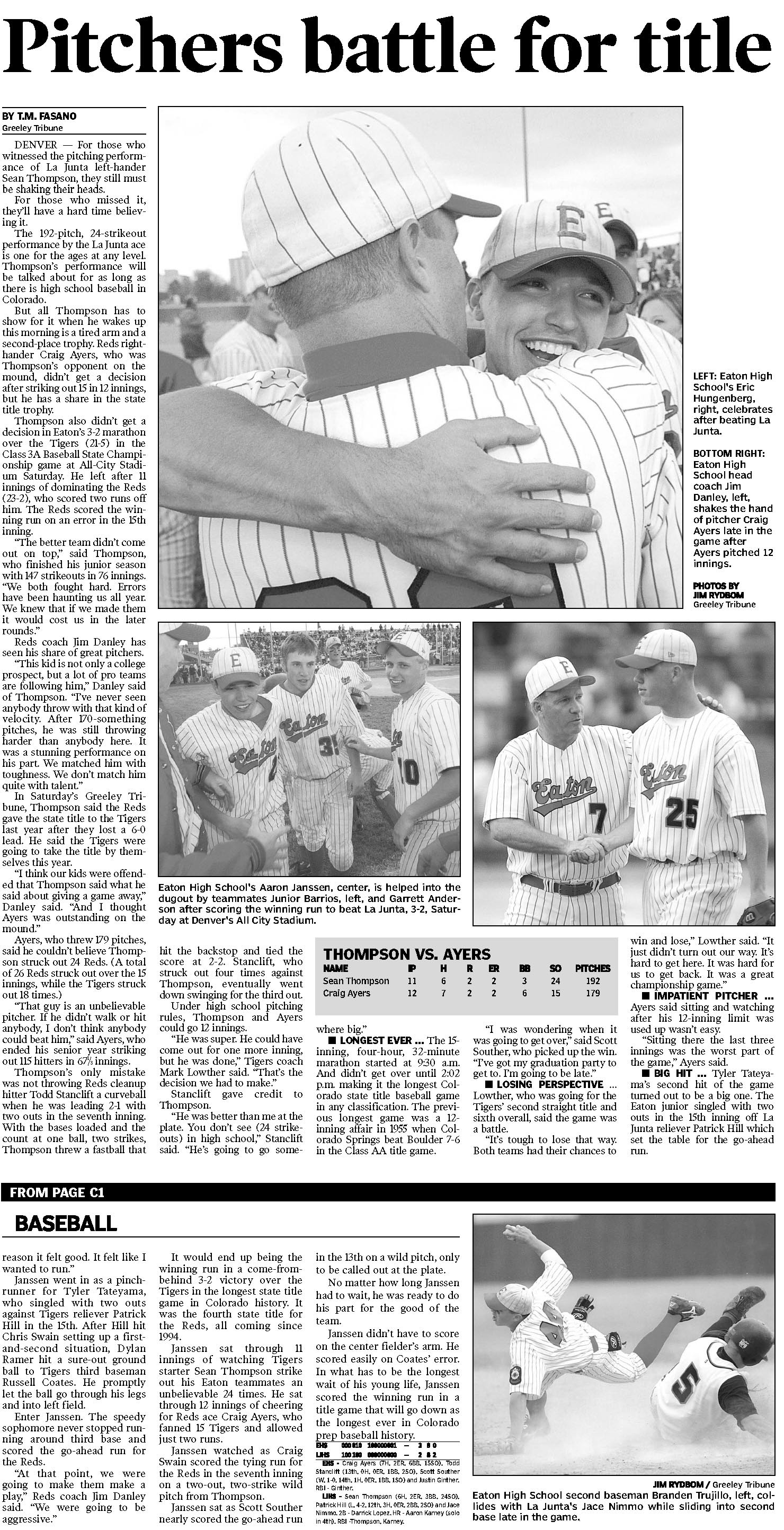 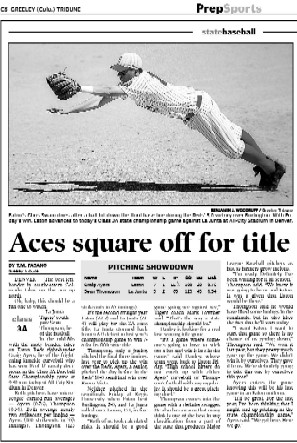