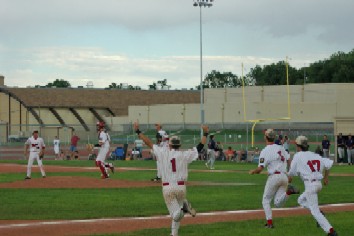 Districts: The Reds defeated Valley and Fort Morgan in the District Tournament to guarantee qualifying for the State Tournament, and then after a 6-5 loss to Brush, the Reds came back to defeat Greeley West, Fort Morgan, and Brush by margins of 13, 18, and 9 runs respectively to win the District Championship and earn the top seed for the State Tournament, which would be played in Eaton and give the Reds a chance for their first State Championship pileup on their own field in history.

Game Highlights: As the late game on the first day of the State Tournament, a rain delay from the largest storm in 2008 causes the game to be delayed until the following morning, Reds' parents and volunteers work literally throughout the night to prepare the field for the next morning which picks up with the Reds trailing 4-1 with two runners on base in the 3rd inning when Pickar singles on the first pitch to knock in two runs, Hall then shuts down Valley allowing just one hit and no runs the rest of the way, while the Reds take the lead with 2 runs in the 4th inning and then tack on 5 more runs over the next two innings to put the game away. Anderson, Pickar, and Hall each hit doubles, Jackson triples, and Pickar leads the Reds with 3 RBI and Anderson and Jackson each knock in 2 runs.

Game Highlights: Tied 2-2 after the first inning, the Reds score 5 runs in the top of the 2nd inning to take a commanding lead with Hall doubling and knocking in 2 runs, and Jackson, Monfort and Wallace also knocking in two runs, while Jackson and Ruff scatter 8 hits through the first 5 2/3 innings and then Hall enters in relief on a 2-2 count and strikes out a batter with runners on base to end the 6th inning and then shuts down Fort Morgan in the 7th inning to preserve the win. 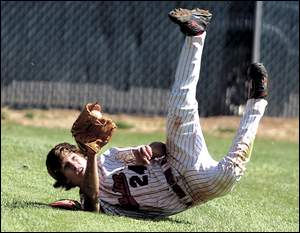 Game Highlights: Ruff shuts down Holy Family through 5 innings as the Reds take a 4-0 lead led by a 2-run home run from Hall, but then after two runs are allowed, Hall takes the mound in the 6th inning to shut down Holy Family the rest of the way allowing just one hit, as the Reds add 4 runs in the top of the 7th inning to put the game out of reach, led by a double from Ruff and Hall and a triple from Pickar, as Hall leads the Reds with 4 RBI and Geisick knocks in 2 runs to secure the win and put the Reds in the State Championship Game, the Reds would have to win just one of the next two possible games to secure the Title. 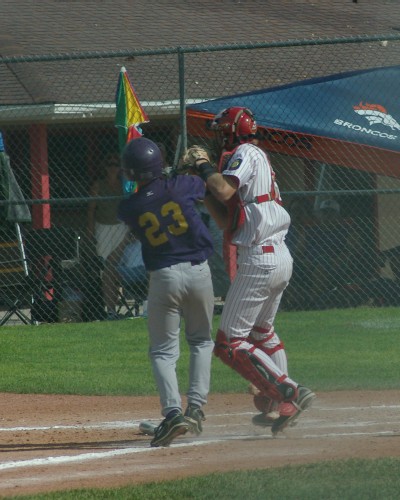 Game Highlights: The Reds fall behind 1-0 in the top of the 2nd inning but then Wallace retires two straight batters to work out of a jam with runners on 2nd and 3rd base as second baseman Smith throws out a runner at the plate for the 2nd out of the inning, after being held scoreless for the first four innings, the Reds score 5 runs in the 5th inning to take a commanding lead with 5 runs all with two outs as the Reds are led by a double from Hall and Wallace, as well as a triple by Wallace, and 2 RBI for Hall and Pickar, while Ruff and Wallace each knock in a run as well, with Wallace hitting a ball off the third base bag for a double to score a 6th inning insurance run for the Reds, then with the bases loaded and one out, Hall takes the mound and retires the next two batters, ending the game with a short flyout to centerfielder Geisick as the Reds pile up for the first time on their own field. 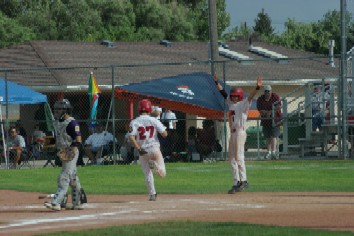 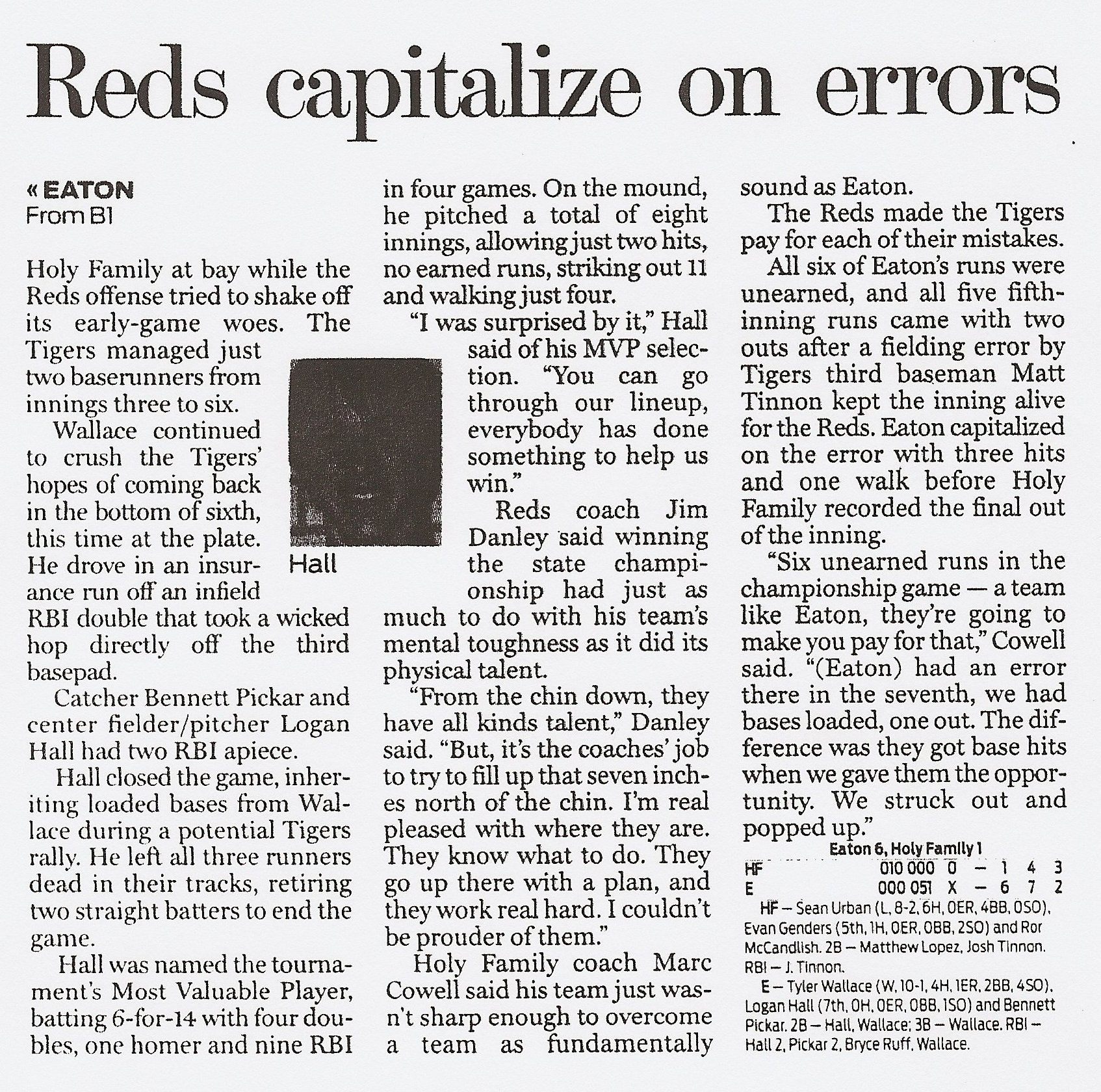 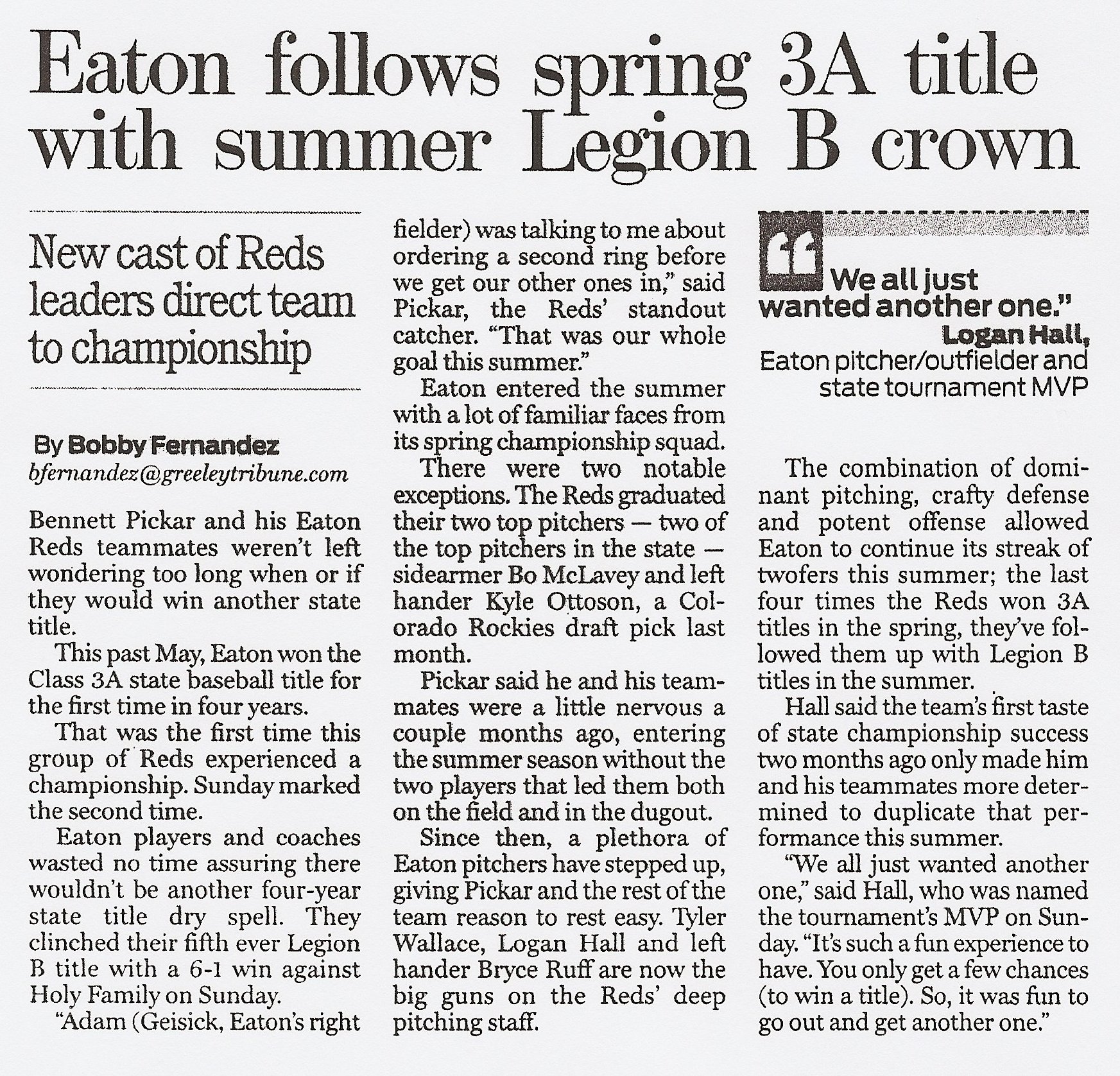 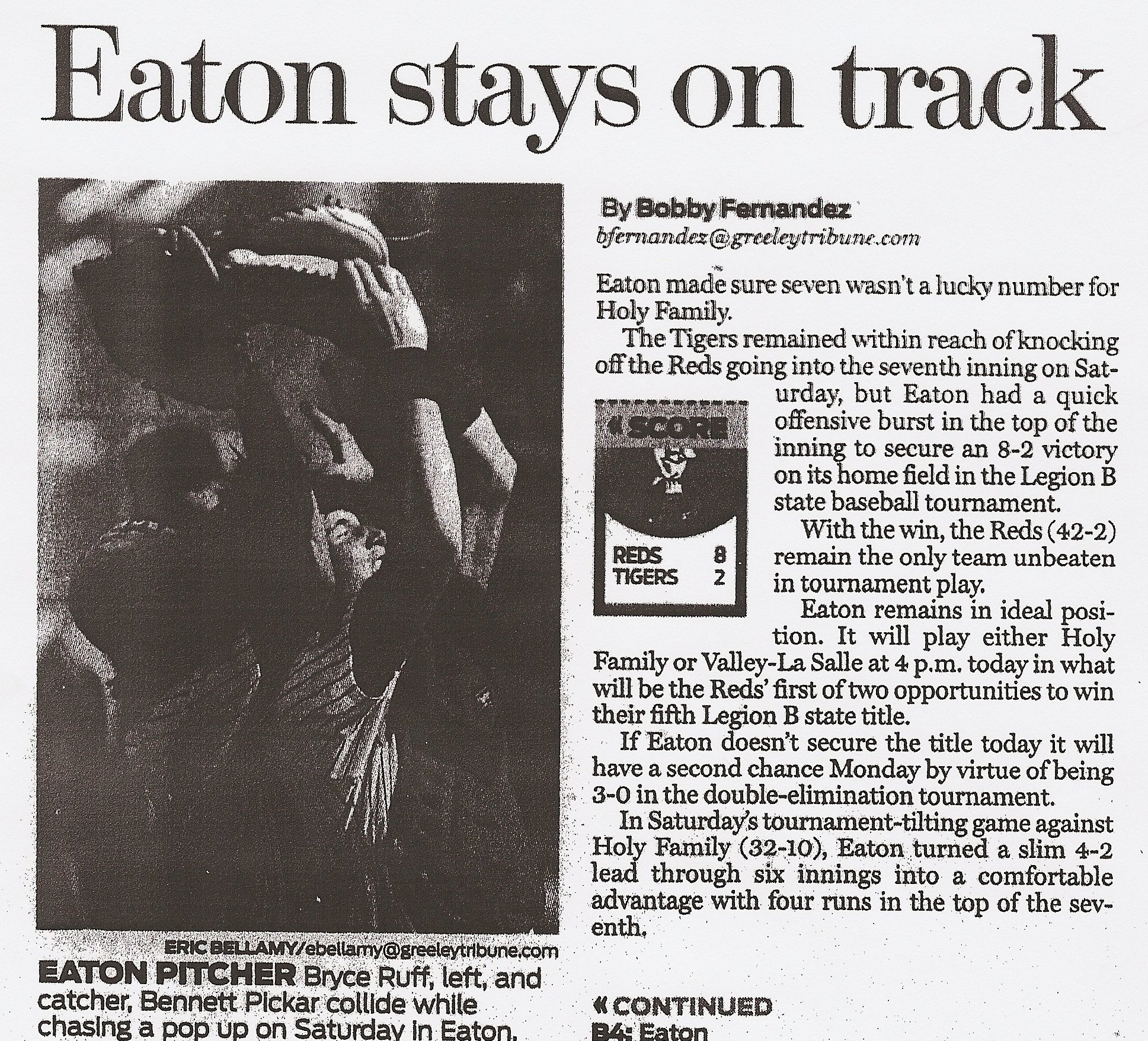 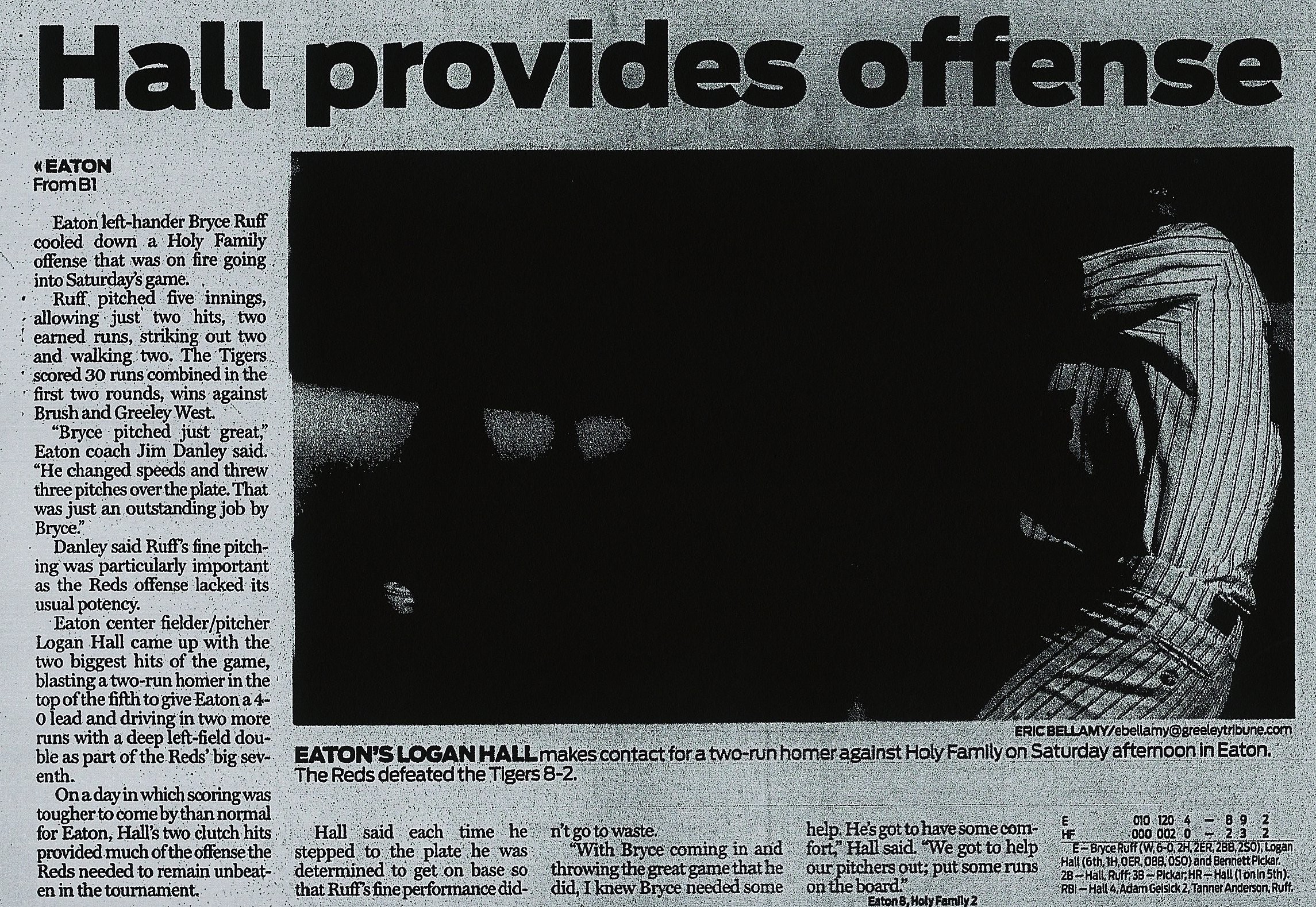 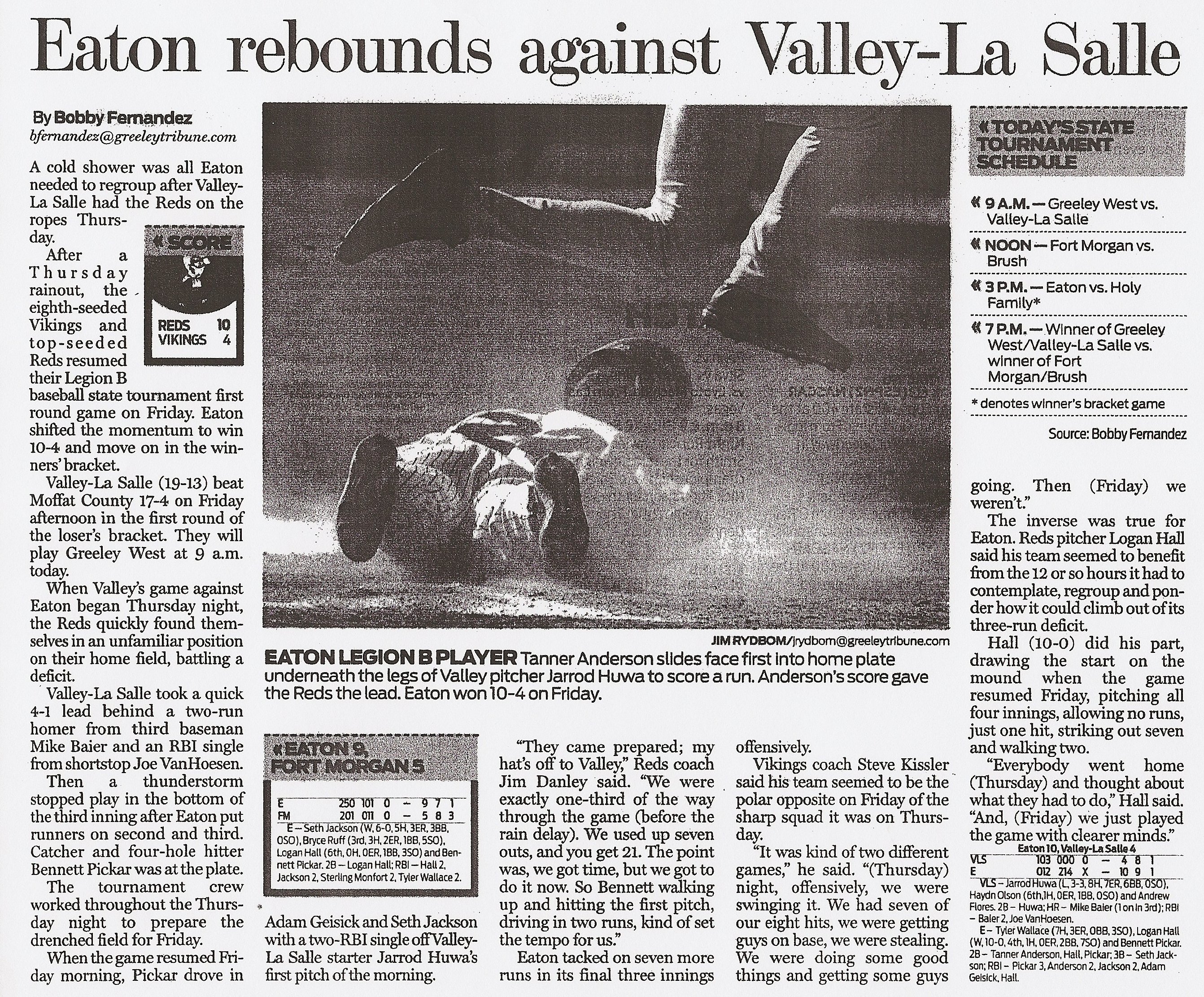 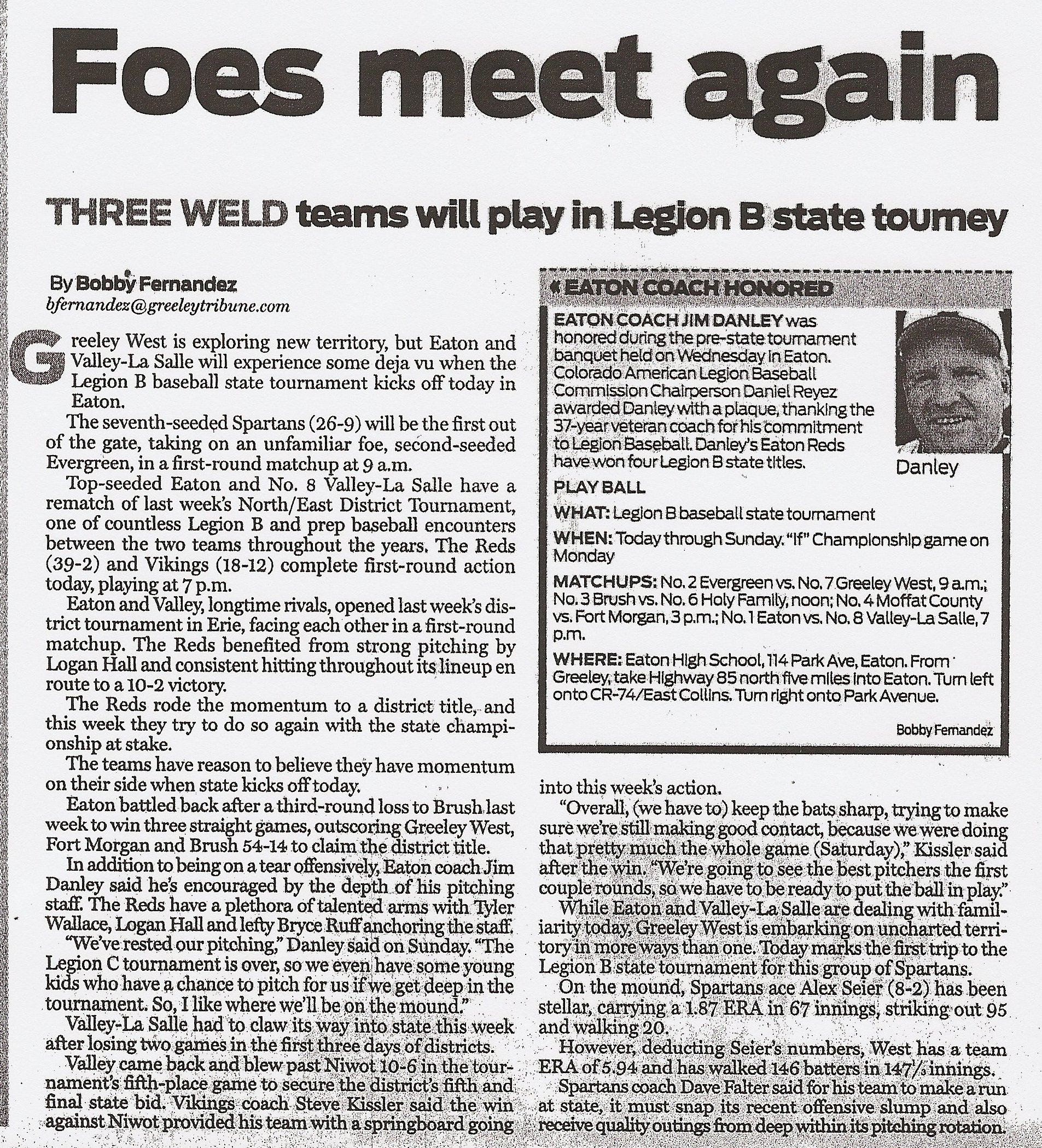 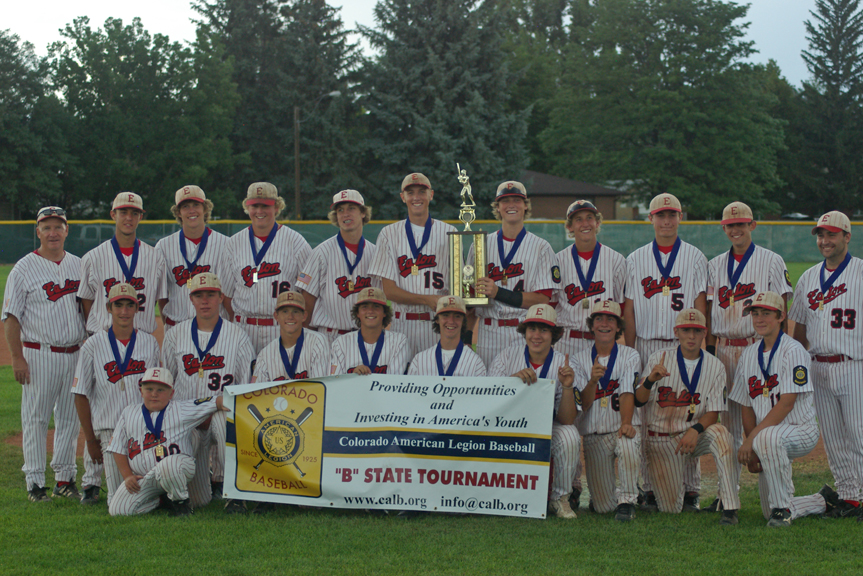 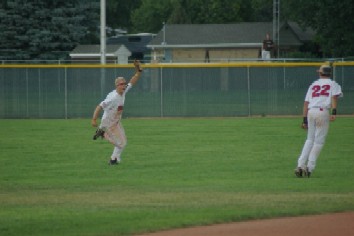 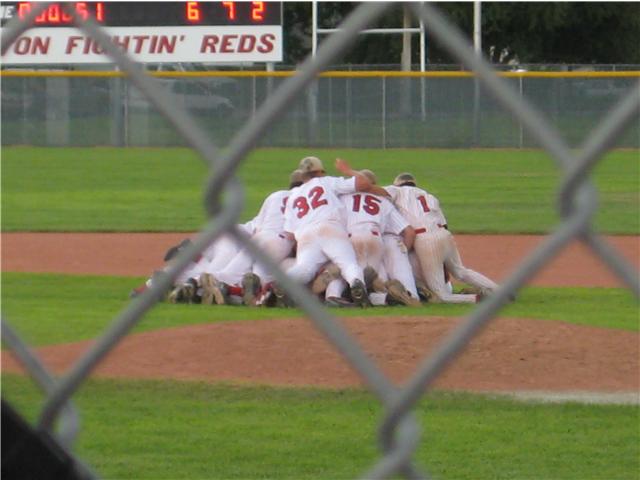 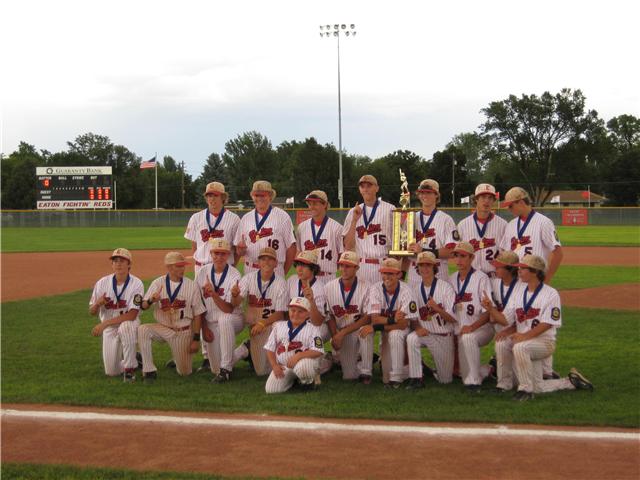