The format of the State Tournament changed from having a 16-team single-elimination format to a 32-team bracket with the first two games being must-win, then followed by an 8-team double-elimination bracket. The Reds easily defeated Clear Creek 16-2 and Hotchkiss 19-2 playing at home in the Regional games, thus advancing to the double-elimination tournament...

1st Inning: McLavey retires the first two batters and then allows a single before Pickar throws the runner out trying to steal 2nd base to end the top of the inning, Wallace gets a two-out single but doesn't score, Reds tied 0-0

2nd Inning: McLavey allows a one-out double and then a walk, but then fields the next ball for an out and strikes out the final batter of the inning, Ottoson leads off with a double and then Monfort singles with two outs to knock him in, Reds lead 1-0

3rd Inning: McLavey retires the side with groundouts, Ruff doubles but then running from third base is thrown out at the plate trying to score on a fly ball hit by Hall to end the inning, Reds lead 1-0

4th Inning: McLavey allows a one-out single but then induces groundouts to shortstop Anderson and third baseman Wallace to end the inning, McLavey and Ottoson single but are left stranded, Reds lead 1-0

5th Inning: McLavey records two quick out and then after a walk induces a popout to first baseman Monfort to strand the runner at first base, Monfort leads off with a single, then Geisick singles and Hall singles to knock in a run, Wallace is intentionally walked and then with two outs Ottoson draws a bases-loaded walk to score another run, Reds lead 3-0

6th Inning: McLavey retires the side in order on just 10 pitches, Ruff is hit by a pitch but left stranded at first base, Reds lead 3-0

7th Inning: McLavey induces a groundout to second baseman Jackson, then strikes out the next batter and then ends the game on a ball caught by Anderson, Reds win 3-0

Game Highlights: McLavey was dominant and only allowed two runners to reach 2nd base and no one to reach third base, with no more than one hit ever allowed in an inning and the Reds defense was flawless.

1st Inning: Ottoson strikes out the first two batters and then after a walk, induces a popout to shortstop McLavey to end the top of the inning, Geisick walks and Hall reaches on a fielder's choice before Wallace singles and McLavey triples to rightfield to knock in 2 runs, Reds lead 2-0

3rd Inning: After allowing some rare walks and a wild pitch, Ottoson induces a sacrifice fly and a 3-pitch strikeout to limit the damage to 2 runs, Jackson singles and Pickar walks and then with two outs Geisick singles to knock in a run, Hall triples in 2 more runs and Wallace is hit by a pitch, Reds lead 9-2

4th Inning: Ottoson records two straight strikeouts to end the inning after a couple batters had reached base on a walk and a single, Ottoson leads off with a double, then Jackson doubles to knock in another run, Reds lead 10-2

5th Inning: Ottoson retires the side with two strikeouts and a flyout to leftfielder Ruff, the Reds are retired in order, Reds lead 10-2

6th Inning: Ottoson strikes out the leadoff batter and then after a walk induces an inning-ending double play turned by Jackson and McLavey, Jackson and Pickar walk and after a wild pitch, Monfort knocks in Jackson, Reds lead 11-2

7th Inning: Ottoson records another strikeout and then after a walk, hit and wild pitch, induces a sacrifice fly before inducing a groundout to McLavey to end the game, Reds win 11-3

Game Highlights: While less dominant than in his previous outing against Faith Christian in the regular season in which Ottoson threw one of the top games ever despite high winds, Ottoson still recorded 12 strikeouts and prevented Faith from ever starting much of a rally after the Reds put together an early lead and then continued to build upon it throughout the game.

1st Inning: Wallace retires the side in order, then the Reds take a commanding lead right away as the first 7 batters all reach base and score with Geisick walking, Hall singling, Wallace tripling, McLavey reaching on an error, Ottoson walking, Jackson reaching on an error and Pickar singling before Geisick singles in his 2nd at-bat of the inning, Reds lead 7-0

2nd Inning: Wallace allows a double with one out and then a fielder's choice that scores him on a groundout to McLavey followed by a groundout to third baseman Anderson that ends the top of the inning, Ottoson draws a two-out walk but doesn't advance, Reds lead 7-1

3rd Inning: Wallace allows a two-out home run but then comes back with a strikeout to end the inning, Pickar then singles, Monfort doubles, Ruff walks, Geisick reaches on an error, and then with two outs, Wallace, McLavey and Ottoson all single to give the Reds once again a commanding lead, Reds lead 11-3

4th Inning: After a single, walk, and catcher's interference loads the bases with no outs, Wallace strikes out the next 3 batters on just 12 pitches to end the threat, Pickar singles, Monfort reaches on an error, Ruff singles, Geisick is hit by a pitch to knock in a run, Hall grounds out to knock in another run, and Wallace hits a sacrifice fly to score Ruff, Reds lead 14-3

5th Inning: A leadoff walk and then a hit and a fielder's choice and two doubles score 3 Erie runs before a groundout to shortstop McLavey ends the inning, the Reds are retired in order, Reds lead 14-6

6th Inning: McLavey takes the mound and retires the side in order with two groundouts and a strikeout, Ruff walks, Geisick singles, Hall walks, Wallace walks to score a run, and McLavey hits a sacrifice fly to leftfield that scores Geisick to end the game via the 10-run rule, Reds win 16-6

Game Highlights: Erie had defeated the Reds earlier in the year to become one of only two teams to take the league title away from Eaton over the past 30 years, and the Reds pounced on Erie early and often to ensure this game would end in their favor, including not just 7 runs in the first inning, but also 4 more runs in the 3rd inning, leadoff hitter Geisick was on base in each of his 5 at-bats.

1st Inning: Geisick singles, Wallace walks, and then after a wild pitch, McLavey knocks in a run, McLavey allows a leadoff walk but then retires the next 3 batters in order, Reds lead 1-0

2nd Inning: Pickar and Monfort walk, then with two outs Geisick walks, Hall walks to score a run and Wallace singles in two more runs, McLavey allows a two-out double but then strikes out the next batter on 3 pitches to end the inning, Reds lead 4-0

3rd Inning: Jackson doubles but the Reds fail to knock him in, McLavey allows a single but then induces a popout to shortstop Anderson and then Pickar throws out a runner trying to steal third base, Reds lead 4-0

4th Inning: Geisick and Hall walk and McLavey hits a two-out double to score them both, McLavey then retires 3 of the next 4 batters after a fielding error to leave runners stranded, Reds lead 6-0

5th Inning: The Reds are retired in order and McLavey retires the side as well, Reds lead 6-0

6th Inning: Hall singles but the Reds don't score him, then after a walk and a couple singles and a couple errors, McLavey strikes out the final batter of the inning to strand two runners, Reds lead 6-2

7th Inning: McLavey walks but is left on base, McLavey retires the side in order on just 9 pitches including a strikeout to end the game, Reds win 6-2

Game Highlights: McLavey was dominant throughout and the Reds' hitters provided enough offense in the first two innings to keep the game from ever being in much doubt, this win sent the Reds to the State Championship Game the following day, and with the Reds as the only undefeated team remaining, this meant that if the Reds lost the first game, they would still get another shot later in the day, but the Reds planned on taking care of things in the first game. 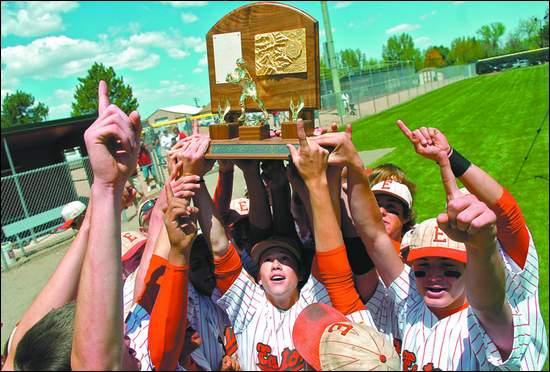 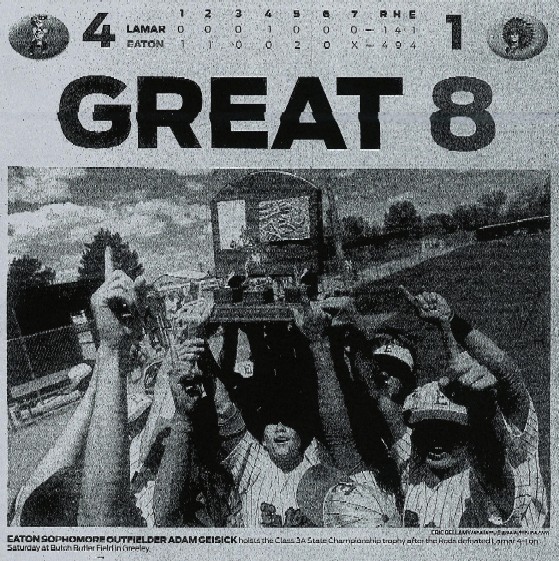 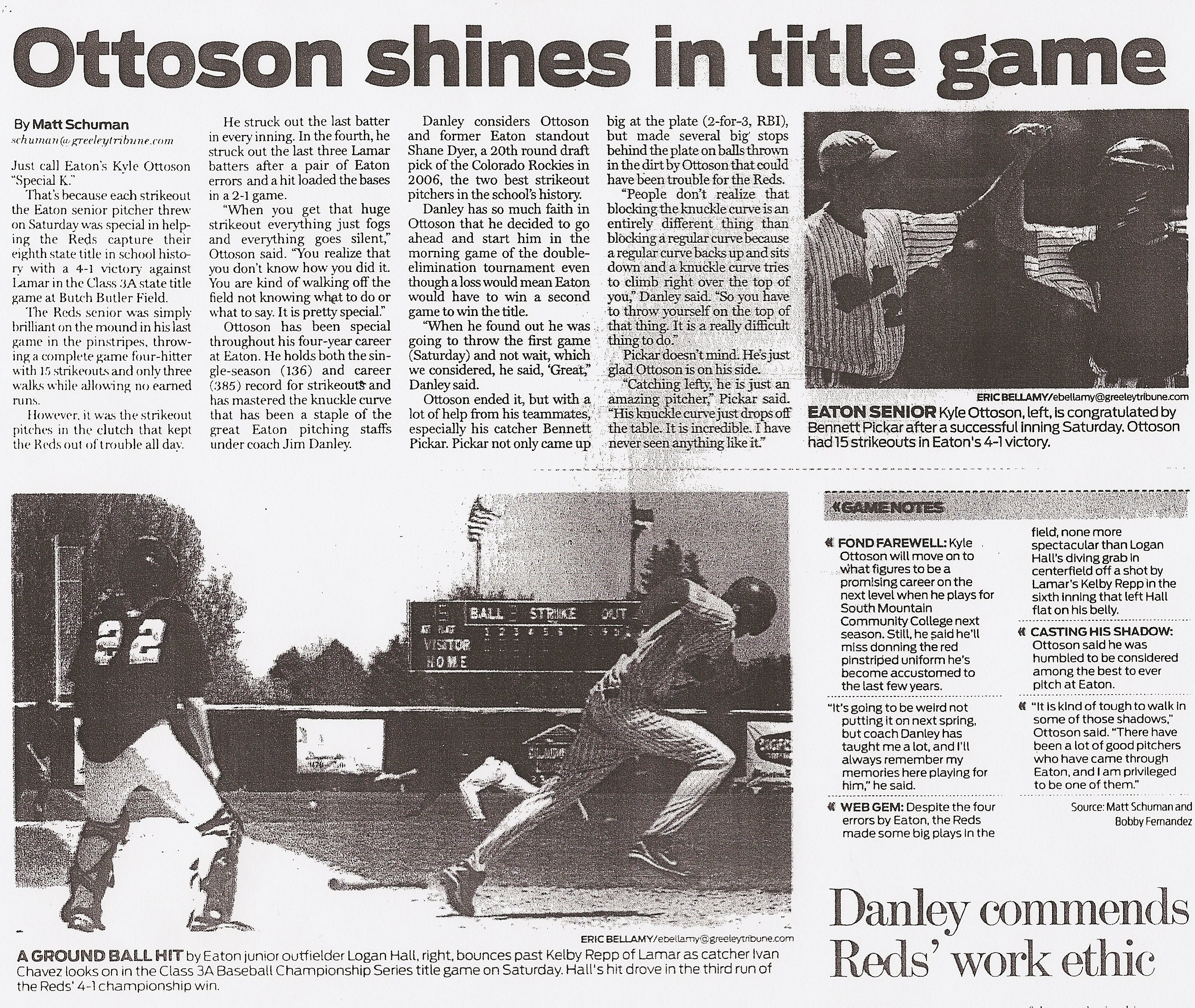 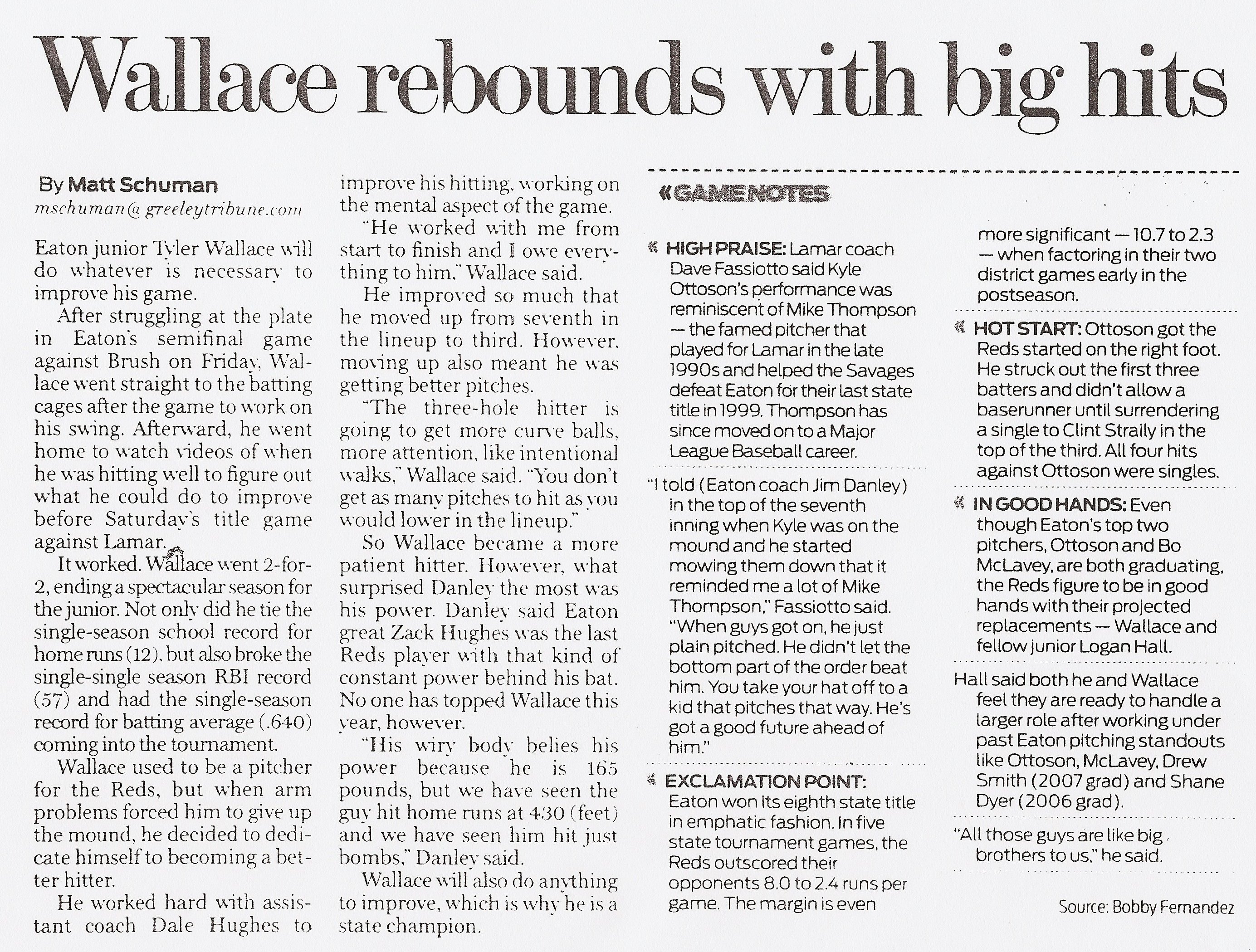 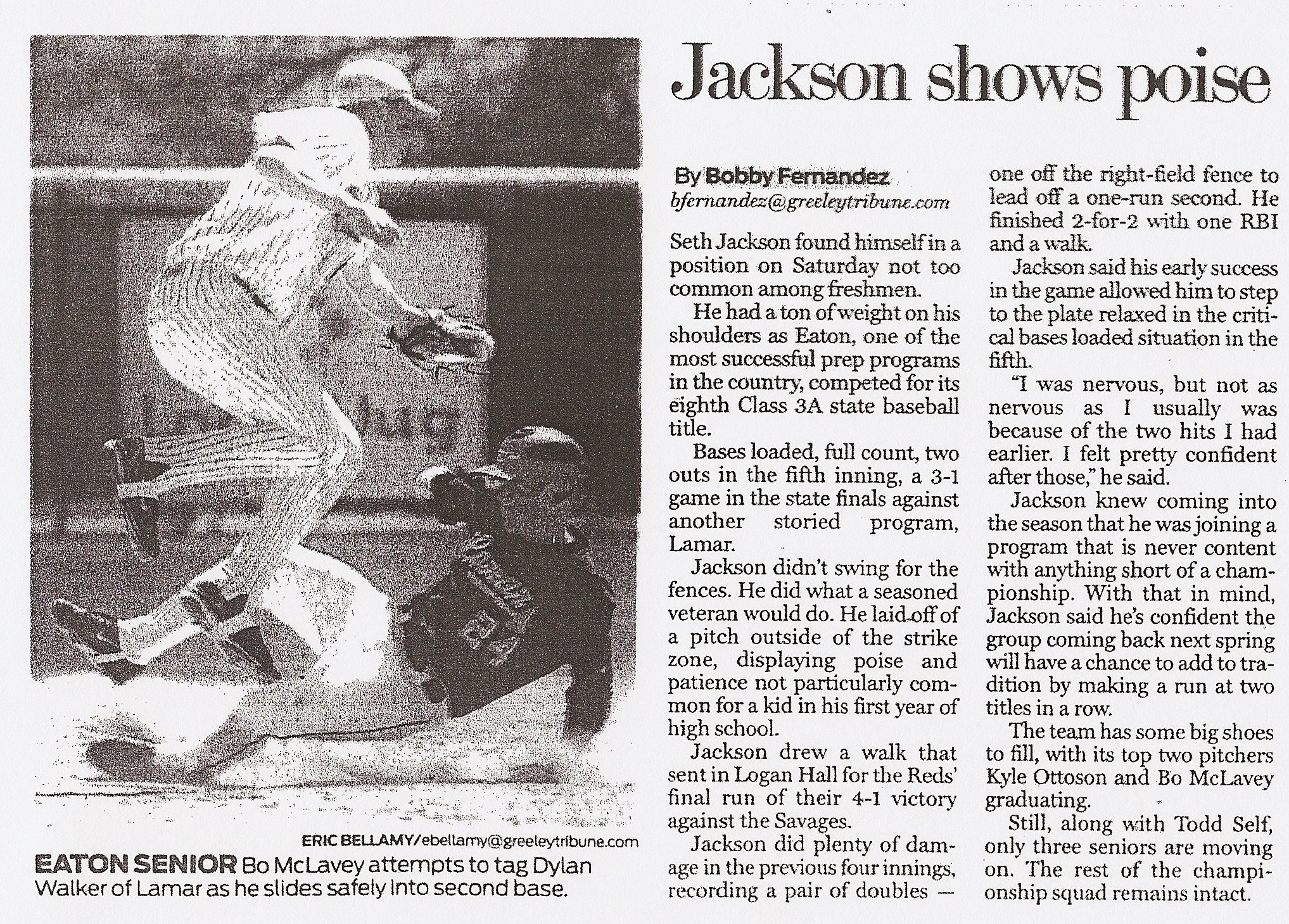 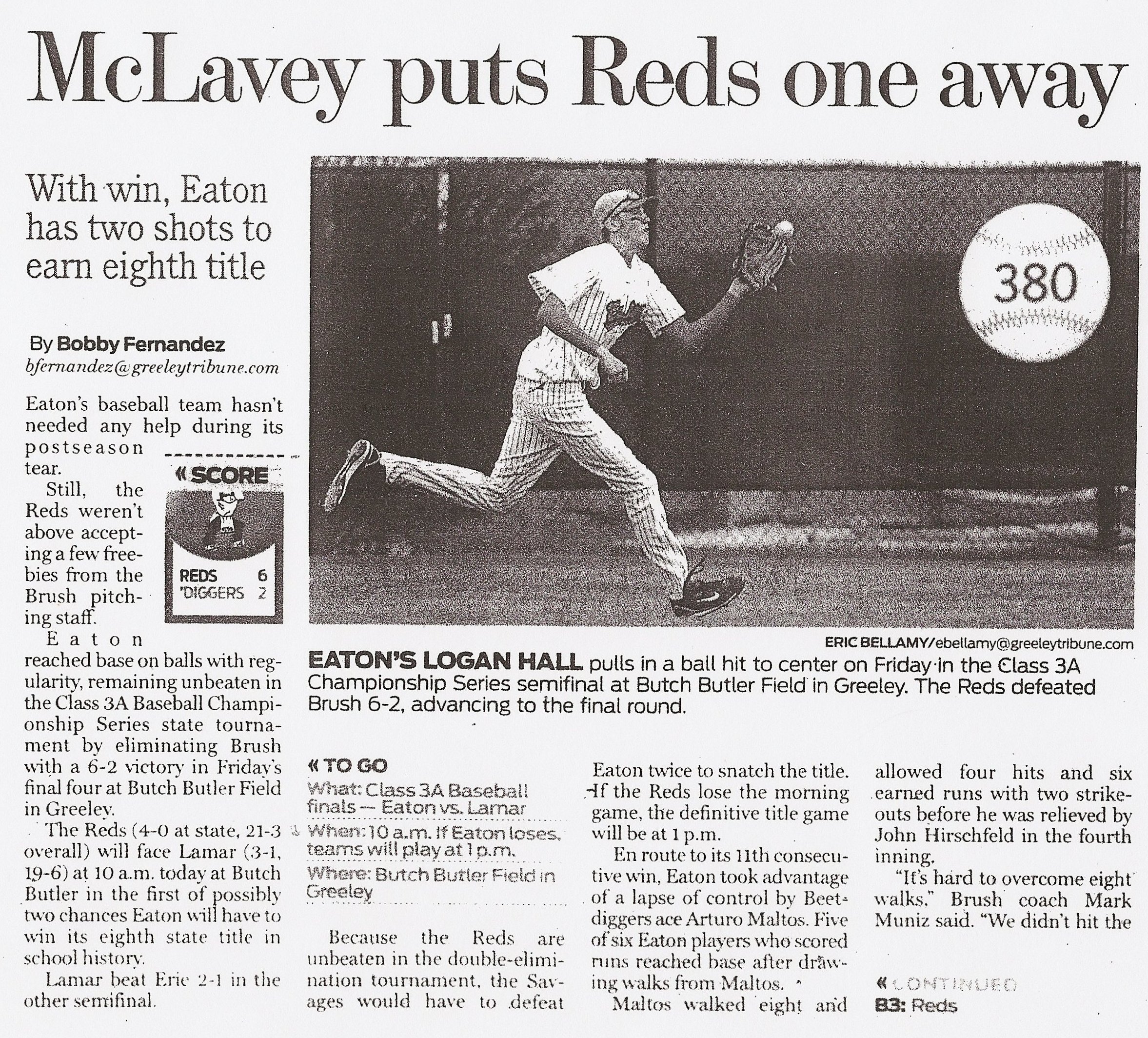 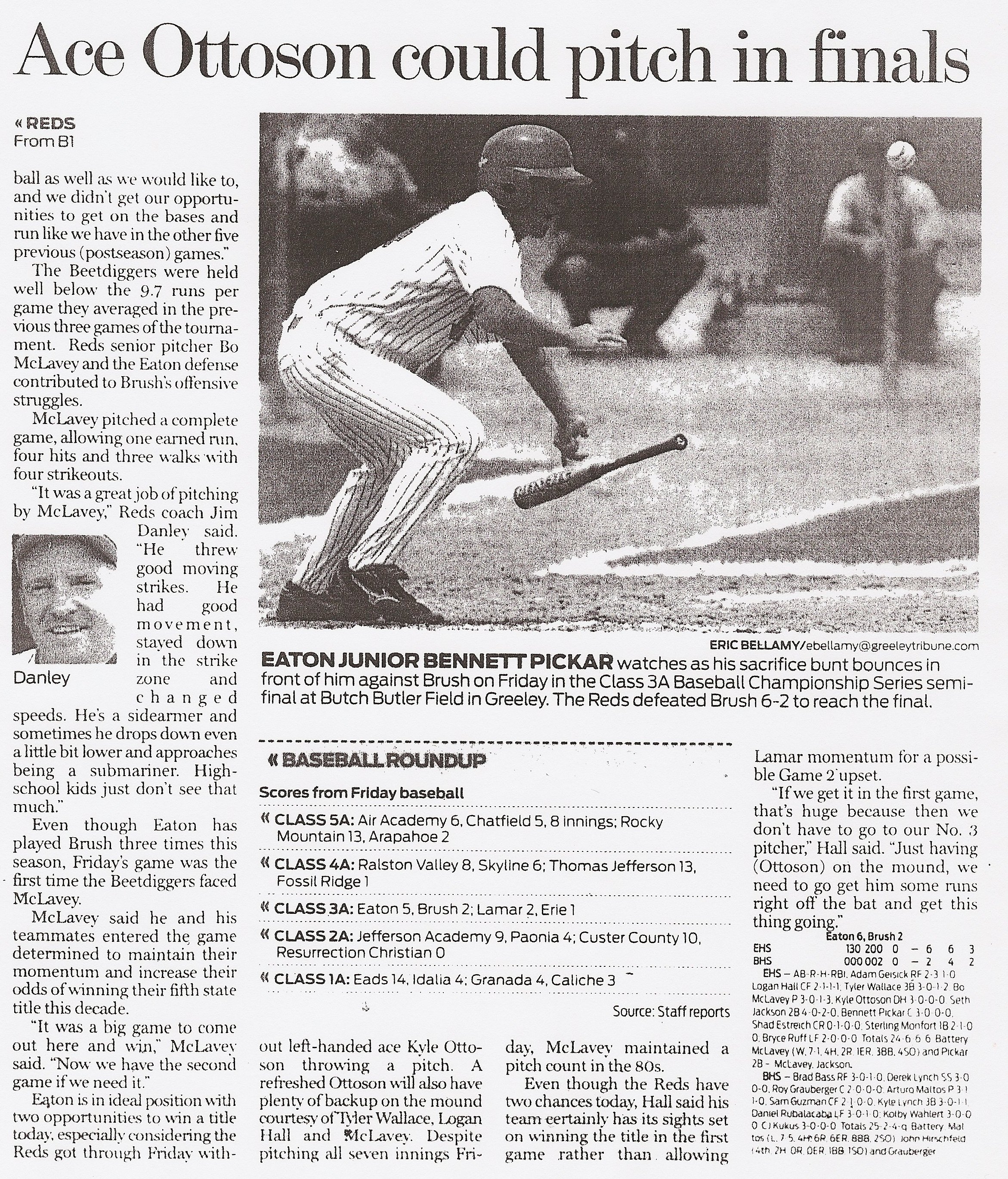 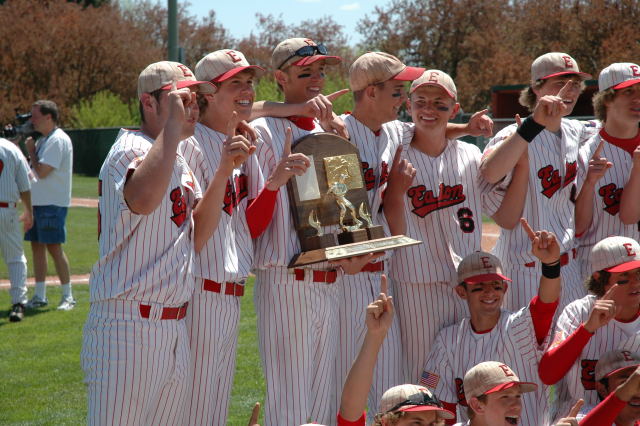 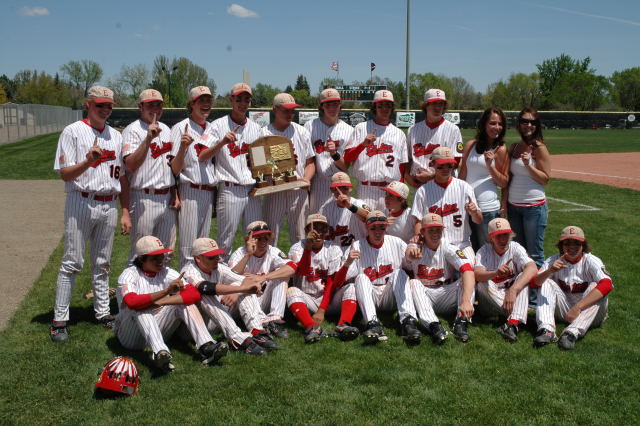 Strikeout with the Potential Tying Run At Bat 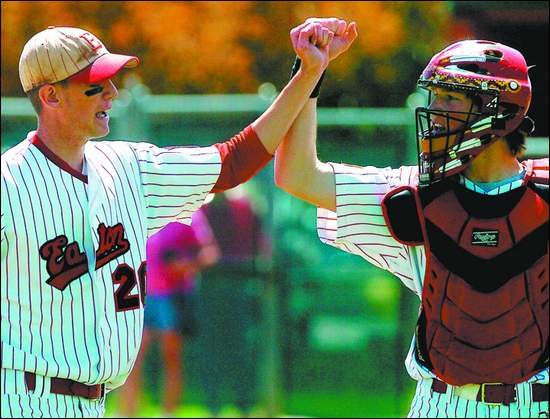 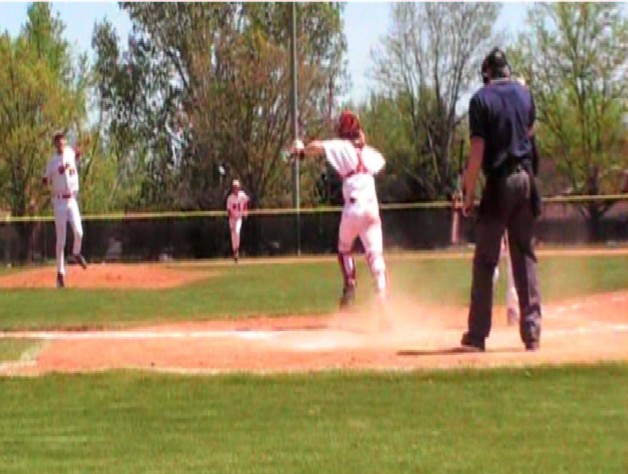 1st Inning: Ottoson strikes out the first 3 batters of the game, Hall doubles and Wallace singles and then McLavey knocks in Hall, Reds lead 1-0

2nd Inning: Ottoson retires the side in order, Jackson leads off with a double and then Pickar doubles to score him, Reds lead 2-0

3rd Inning: Ottoson allows a leadoff single, then after a strikeout, groundout, walk and stolen base puts 2 runners in scoring position, Ottoson strikes out the next batter to end the threat, Wallace singles but is left stranded at second base, Reds lead 2-0

4th Inning: After two errors, a single and a walk load the bases and bring in a run, Ottoson strikes out the next 3 batters on a total of just 9 pitches to end the threat, Jackson doubles and Pickar hits an infield single but the Reds fail to knock in a run, Reds lead 2-1

5th Inning: After a leadoff single and stolen base, shortstop McLavey gets the runner at 2nd base in a rundown and throws him out for the first out, then Ottoson strikes out the next batter and then after an error, strikes out the final batter of the inning, Geisick reaches on an error, then Hall singles, Wallace walks and then with two outs Ottoson and Jackson walk to score two more runs, Reds lead 4-1

6th Inning: Hall makes a great diving play to rob what would have been a leadoff hit, then after an error, Ottoson strikes out the next two batters, Monfort leads off with a single but then a double play and a groundout end the inning, Reds lead 4-1

7th Inning: After a walk, Ottoson records a strikeout and then following a single, induces a groundout to second baseman Jackson, then Ottoson strikes out the next batter to end the game, Reds win 4-1

Game Highlights: Ottoson capped off a remarkable high school career with another dominant performance with 14 strikeouts and got out of every potential scoring threat with strikeouts to end the inning.

Note: This is the first time in Reds history that Eaton never trailed by even a run at any time throughout the State Tournament. 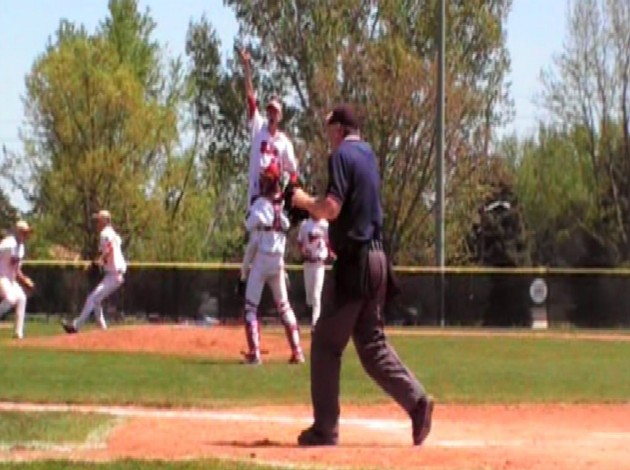 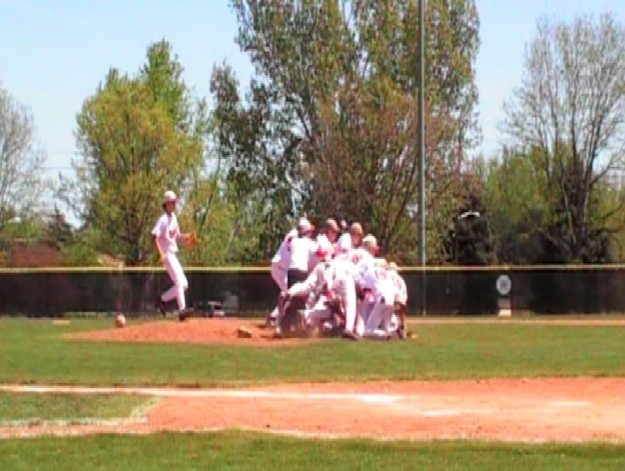 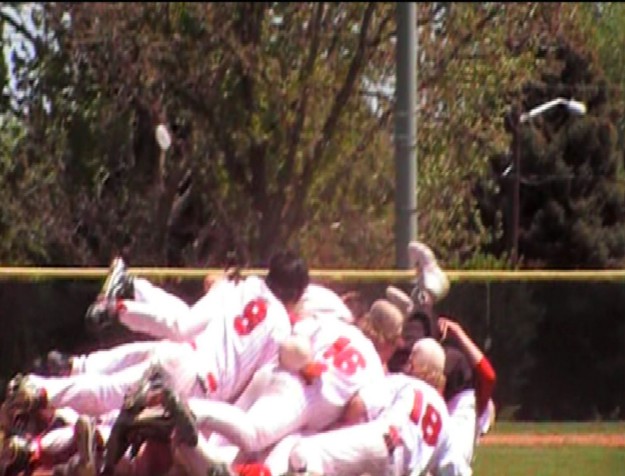