The Reds swept through Denver Christian and Machebeuf 16-0 and 12-0 in Regionals played at Eaton, extending the Reds' shutout streak to an Eaton record of 5 straight shutouts. The Reds' first two opponents in the double-elimination would both have their ace pitchers available, but not use them against Eaton, as opposing teams looked to advance through the loser's bracket with their top pitching available rather than having wasted it against a dominant Eaton team...

3rd Inning: Pickar singles, and then with two outs, Jones singles, Anderson walks, and Monfort singles, then after two walks Ruff retires the side to end the inning, Reds lead 11-0

4th Inning: Ruff singles, Geisick doubles, Jackson walks and Pickar knocks in a two-out run, Ruff allows the only hit of the game before retiring the next two batters to end the inning, Reds lead 13-0

5th Inning: Anderson walks, Monfort takes a hit-by-pitch, Geisick reaches on an error, Jackson singles, and then with two outs, Pickar walks, Hall reaches on an error and Hager singles, Ruff then strikes out two batters and gets the next batter to popout to end the game via the mercy rule, Reds win 18-0

Game Highlights: The 18-run offensive display makes it easy to overlook the fact that Ruff threw a complete-game 1-hit shutout, facing just 4 batters over the minimum. Gunnison elected before the game to throw their #3 pitcher to effectively concede the game and try to come back through the loser's bracket with their top pitchers, figuring the Reds were going to beat their top guys anyway. This was the Reds' 6th consecutive shutout, an Eaton record. 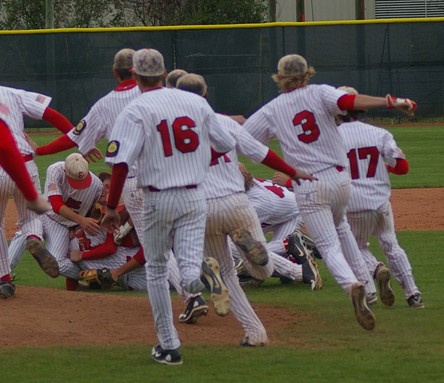 1st Inning: After a leadoff walk and single, Hall strikes out two of the next 3 batters and induces a flyout to strand both runners on base, Geisick then walks, Jackson walks, Wallace reaches on an error, Pickar singles, Hall triples, and Jones reaches on an error, Reds lead 5-0

2nd Inning: Hall strands the bases loaded with two strikeouts to end the inning, then the Reds are retired in order for the only time in the entire State Tournament, Reds lead 5-0

3rd Inning: After 3 unearned runs score for Faith Christian, Hall retires the side, then the Reds have their half of the inning ended on a double play, Reds lead 5-3

4th Inning: Hall strands runners on 1st and 3rd base by retiring the final two batters of the inning, then Monfort, Ruff, and Geisick walk, Jackson reaches on a fielder's choice, then Wallace reaches on an error and Pickar knocks in a run, Reds lead 7-3

Game Highlights: While the game was not in serious doubt, un-Eaton-like errors kept Faith Christian in the game longer than expected given that they too started a #3 starter that had only one start all season, as they too expected the path through the loser's bracket to be easier than trying to knock off the Reds. Wallace's home run was launched deep into the street for a no-doubt, walk-off homer.

1st Inning: After a couple singles and an error led to 2 runs, Hall strikes out the next two batters to end the top of the inning, then Jackson singles but is left stranded on base, Reds trail 0-2

2nd Inning: Hall retires the side in order, then Anderson walks but is left on base, Reds trail 0-2

3rd Inning: After two singles and a hit-by-pitch, Hall strikes out the final batter of the inning to strand the bases loaded, then Jackson draws a 2-out walk, Wallace triples, and Pickar reaches on an error to tie the game, Reds tied 2-2

4th Inning: Wallace enters in relief and retires 3 of 4 batters, then Jones doubles but is left on base, Reds tied 2-2

5th Inning: After a bloop single, Wallace strikes out the next two batters and gets a groundout to strand the runner, Geisick then singles, Jackson takes a hit-by-pitch, Pickar reaches on an error, and then Hall and Jones draw bases-loaded walks to take the lead, Reds lead 4-2

6th Inning: After a single and an error, Wallace strikes out the next two batters to end the top of the inning, then Ruff takes a hit-by-pitch, Jackson walks, Wallace singles, Pickar doubles, Hall doubles, and Jones and Anderson single to take a commanding lead, Reds lead 9-2

7th Inning: Wallace induces a leadoff flyout and then strikes out the next two batters to end the game, Reds win 9-2

Game Highlights: Facing a team's top pitcher for the first time all weekend, the Reds sputtered for a few innings before taking a commanding lead, Hall pitched well starting his 2nd straight game of the weekend, before Wallace came in as planned and shut down Holy Family with 8 strikeouts in 4 innings as the Reds' bats took over to win the game and guarantee the Reds a spot in at least the State Championship "If" Game. The Reds would need to beat Manitou Springs the next weekend though in order to keep the undefeated season alive and to force an opponent to have to beat the Reds twice on Championship Saturday in order to claim the State Championship.

1st Inning: Geisick walks and Pickar singles but both are left stranded, Ruff allows 3 singles and 2 walks before striking out the final batter of the inning to leave the bases loaded, Reds trail 0-2

3rd Inning: Anderson and Monfort reach on errors, Ruff takes a hit-by-pitch, Geisick knocks in a run on a groundout, then Jackson singles in two more runs to chase the starting pitcher, and Wallace hits a 2-run home run, then after 4 runs score for Manitou Springs, Foos enters in relief and Pickar throws out a runner attempting to steal 3rd base to end the inning, Reds lead 10-6

4th Inning: Anderson reaches on an error but is left stranded, Foos retires the first batter and then after a hit-by-pitch and single, induces a groundball that Jackson and Wallace turn for an inning-ending double play, Reds lead 10-6

5th Inning: Geisick and Wallace walk, but are left stranded, Foos retires the side in order, Reds lead 10-6

6th Inning: Anderson walks, Monfort singles, and Ruff hits a sacrifice fly to add an another insurance run, Foos allows a leadoff single but then retires the next 3 batters in order, Reds lead 11-6

7th Inning: Pickar hits a two-out triple but is left stranded, Foos retires the side in order to end the game, Reds win 11-6

Game Highlights: The Reds entered the game with two goals, one of course was to win, the other was to win without having to throw Hall or Wallace if at all possible. The Reds were able to accomplish that by taking a commanding early lead and holding on with a strong relief performance from Foos, thus allowing both of the Reds' top pitchers to be fully rested for Championship Saturday, as the Reds now would only have to win 1 of potentially 2 games to be crowned State Champions. 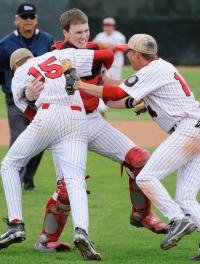 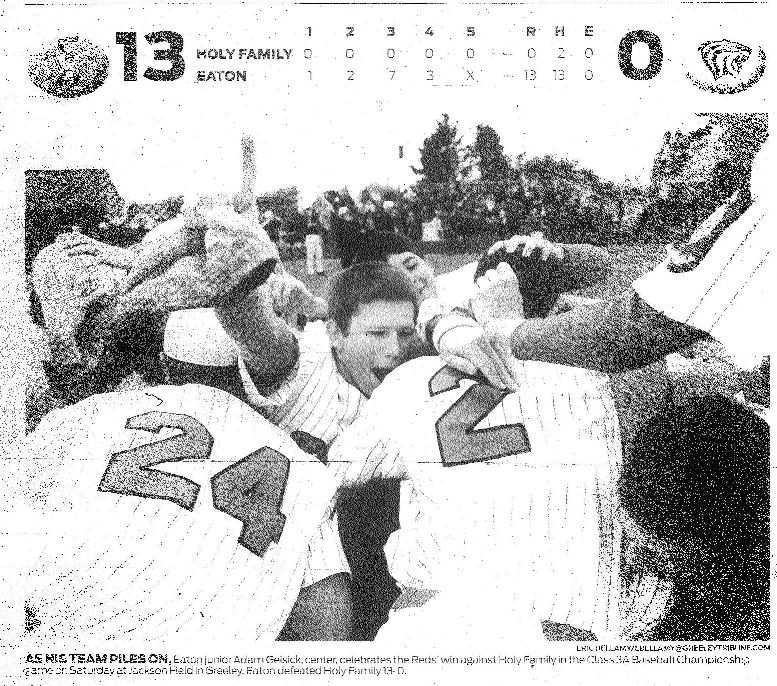 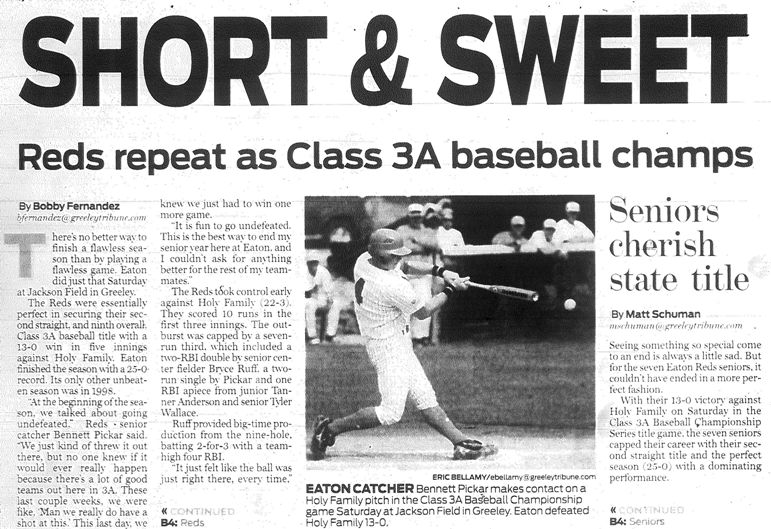 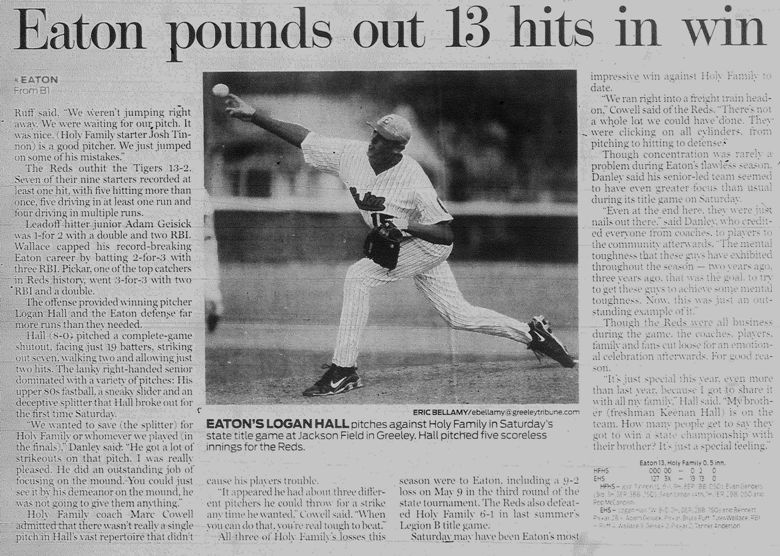 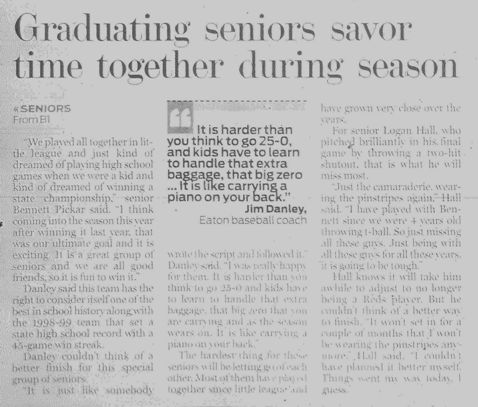 Reds 10-Run Nearly Every Opponent, Even in State Championship Game 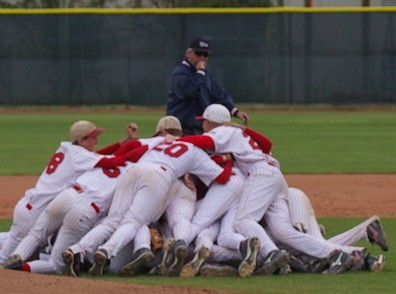 Groundout to Second Base 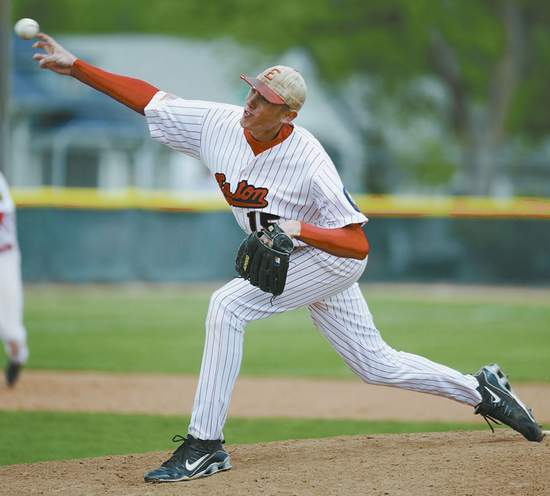 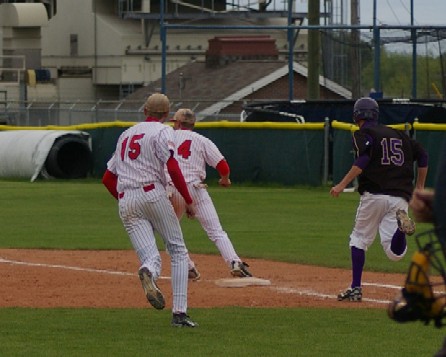 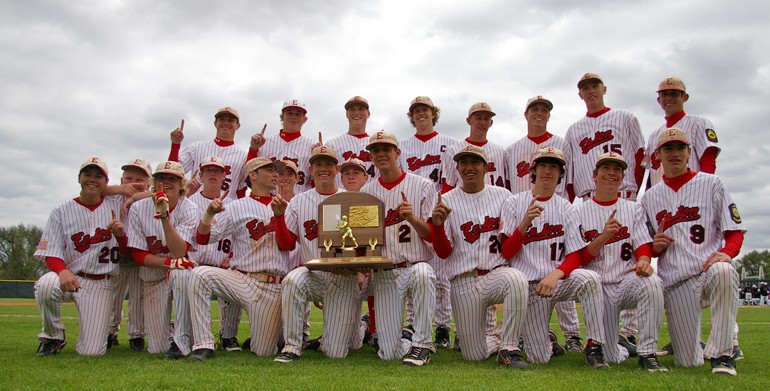 1st Inning: Hall induces a popout, and then after a strikeout, uses his splitter for the first time in a game all season to strike out the next batter in commanding form, Geisick then doubles and Pickar hits a two-out double to take the lead, Reds lead 1-0

2nd Inning: Hall gets two quick outs and then after a single, fields a comeback grounder for the final out, Jones then singles, Anderson walks, Monfort singles and Geisick knocks in a run on a groundout, Reds lead 3-0

3rd Inning: Hall gets two quick outs and then allows his 2nd, and final, hit of the game before again taking a comeback grounder for the final out, Wallace singles, Pickar singles, and then with two outs, Anderson singles, Monfort singles, and Ruff doubles to chase their starting pitcher, then Geisick walks, Jackson takes a hit-by-pitch, Wallace walks, and Pickar singles as the Reds put the game completely out of reach, Reds lead 10-0

4th Inning: Hall retires the first two batters before a walk and then a groundout to end the top of the inning, Jones reaches on a strikeout that bounces away, Anderson singles, Monfort reaches on a fielder's choice, Ruff doubles to chase another pitcher, then Geisick hits a sacrifice fly, Jackson walks, and Wallace doubles, Reds lead 13-0

5th Inning: Hall strikes out the first two batters and then induces a groundout to end the game, Reds win 13-0

Game Highlights: While the Reds' offense exploded to win in overwhelming fashion, Hall was so dominant in a complete-game 2-hitter that the Reds only needed one run on this day. Hall faced only 4 batters over the minimum in the State Championship Game to once again close out Holy Family as he had the summer before in the American Legion State Championship. This win would be one of only 3 State Championship victories in the entire nation in 2009 in which a team won by 10 or more runs in a shutout, with this being the highest score of such games and thus the most dominant State Championship win in the nation. The win also completed the Reds' 2nd undefeated season in history, and was one of only 6 undefeated State Championship seasons in the entire nation in 2009. The Reds would also finish the season ranked as the #40 team in the entire nation by CBS Sports' MaxPreps and the #1 team in the nation for all schools with an enrollment under 800, thus making the Reds #1 in their classification nationally. The seniors graduated winning 80 of their final 82 games in pinstripes, winning 3 State Titles during that stretch.