Game Highlights: The Reds took a 1-0 lead in the 5th inning as Weston Hager walked and then scored on a single by Dante Foos, and a hit-by-pitch to Seth Jackson. Then after getting behind 2-1 in the bottom of the inning, the Reds exploded for 7 runs as Bryce Dyer doubled, Keenan Hall singled, Trent Sieg singled, Hager singled and Foos reached on an error, before Jackson, Tyler Batt and Tyler Sieg singled to take a commanding lead. Sieg threw 6 of the 7 innings, with Foos earning the win as he got the Reds out of the bottom of the 5th inning against a left-handed hitter, before Sieg re-entered to complete the win in the 6th inning.

Game Highlights: After falling behind 1-0 in the 1st inning, the Reds took the lead in the 3rd inning, as Keenan Hall singled, Trent Sieg singled, Weston Hager doubled, and Dante Foos singled to give the Reds the 2-1 lead. The Reds added two runs in the 4th inning as Cory Dyer doubled, Hall singled, Trent Sieg reached on an error, and Hager singled to take a 4-1 lead. Trailing 6-4 in the 5th inning though, the Reds then had to rally to tie the game as Tyler Batt singled, Tyler Sieg doubled, Cory Dyer walked, Bryce Dyer knocked in a run, and Hall singled to tie the game. Foos then induced a double play and recorded an out himself to end the 5th inning, before the Reds scored 8 runs in the 6th inning to break the game open, with Foos being hit by a pitch, Seth Jackson hitting a double, and then consecutive singles from Batt, Tyler Sieg, Cory Dyer, Bryce Dyer, Hall, Trent Sieg, and then a two-out single from Jackson. Foos then allowed one run in the 6th inning before retiring the side in order in the 7th inning to end the game.

Game Highlights: With the winner of this game advancing to the State Championship Game with an undefeated record, the stakes couldn't have been higher, and the game couldn't have been any closer. The Reds led off with a 1st inning run as Weston Hager singled and scored after singles from Dante Foos and Seth Jackson. In the 2nd inning, Keenan Hall reached on a fielder's choice and scored after singles from Trent Sieg, Hager, and Foos to take a 2-0 lead. Then in the 3rd inning, Cory Dyer singled and Bryce Dyer doubled to increase the lead to 3-0. Greeley West then tied the game in the 4th inning. The Reds then took the lead again in the 6th inning as Hager walked, stole 2nd base, and scored after a walk to Seth Jackson and a single by Tyler Batt. With the sun quickly setting in the 7th inning, Greeley West scored a run to tie the game and send it into the 8th inning. Hager scored again in the 8th inning on a single, followed by a walk to Foos and a double by Jackson to give the Reds the lead. Greeley West though tied the game again in the bottom of the 8th inning, as darkness descended upon the field and forced the suspension of the game to the following day. The benefit of this for the Reds though was that it allowed Foos one more inning to be pitched (that wouldn't have been allowed by rule the previous day), and after Bryce Dyer singled and moved to 2nd base on a wild pitch, Hall moved him over to 3rd base, and then Trent Sieg singled to put the Reds ahead by a run in the 9th inning, followed by Foos then striking out a batter, inducing an infield popout, and then inducing a groundball to Jackson to end the game.

Game Highlights: In the worst inning in Eaton history, the Reds allowed 19 runs in the first inning, using four pitchers to finally complete the inning. However, the Reds were undefeated in the tournament coming into this game and thus did not have to win it.

Game Highlights: The Reds' first 3 batters reached and scored to start the game as Weston Hager walked, Dante Foos singled, Seth Jackson tripled, and Tyler Sieg knocked in Jackson for a 3-0 lead. The Reds though then allowed 7 runs in the bottom of the inning, to fall behind by 4 runs. Foos entered to end the inning though, and as he walked off the mound, proclaimed to the Reds' dugout that West was done scoring today. In the 3rd inning, the Reds battled back as Jackson singled and scored on a single by Tyler Sieg to cut the deficit to 3 runs. Then in the 5th inning, Cory Dyer hit a home run, Bryce Dyer singled, Trent Sieg doubled, Hager and Foos walked, and Jackson and Tyler Batt singled to give the Reds a 9-7 lead. Foos then induced a double play to record his 14th out in the last 15 batters faced. Then in the 6th inning, Bryce Dyer hit a two-out single, Keenan Hall singled, Trent Sieg walked, and Weston Hager singled to increase the lead to 12-7. Foos then retired 3 of the 4 batters in the 6th inning, and then after a couple hit by pitches loaded the bases in the 7th inning, Foos recorded two strikeouts to end the game and send the Reds to their 11th State Championship pileup of the decade, and 15th State Championship pileup since 1994.

Note: The 2010 season was the second-best to-date in terms of overall record, at 44-6, but was the first to ever include victories in the final game in each of two different leagues, as the Reds won the NCBL Championship in only their second season in the wood bat league, in addition to winning this Legion B State Championship. 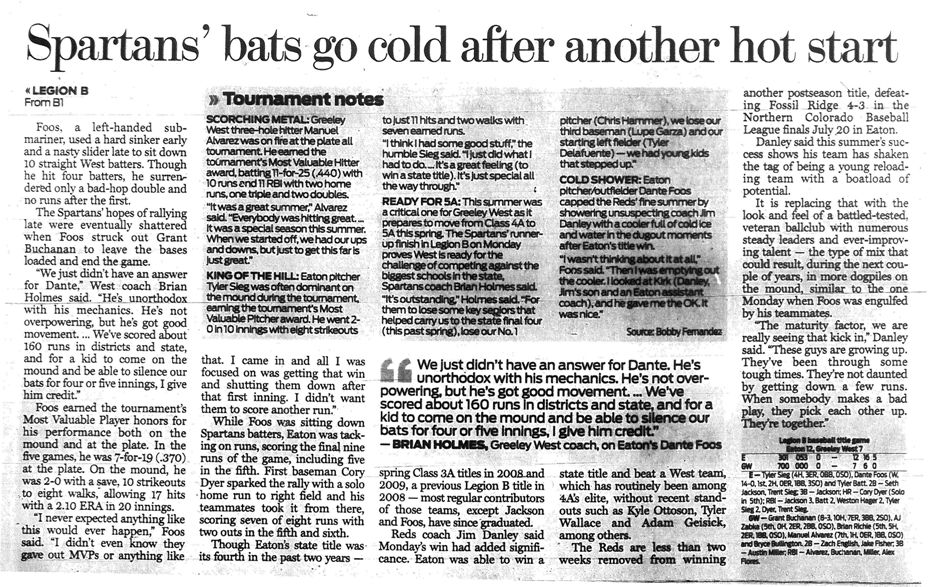 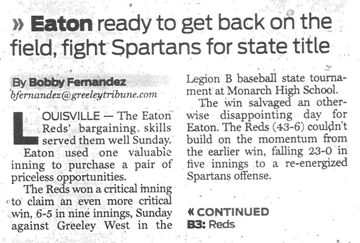 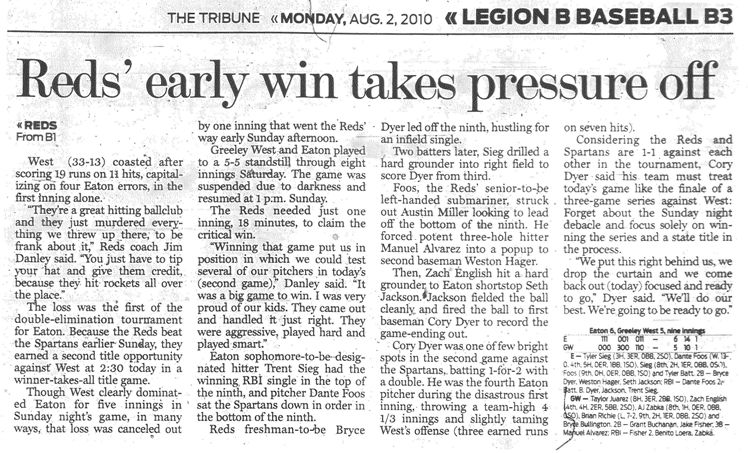 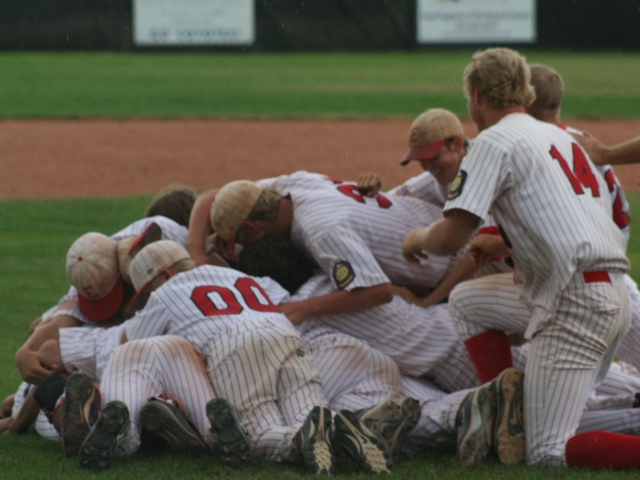 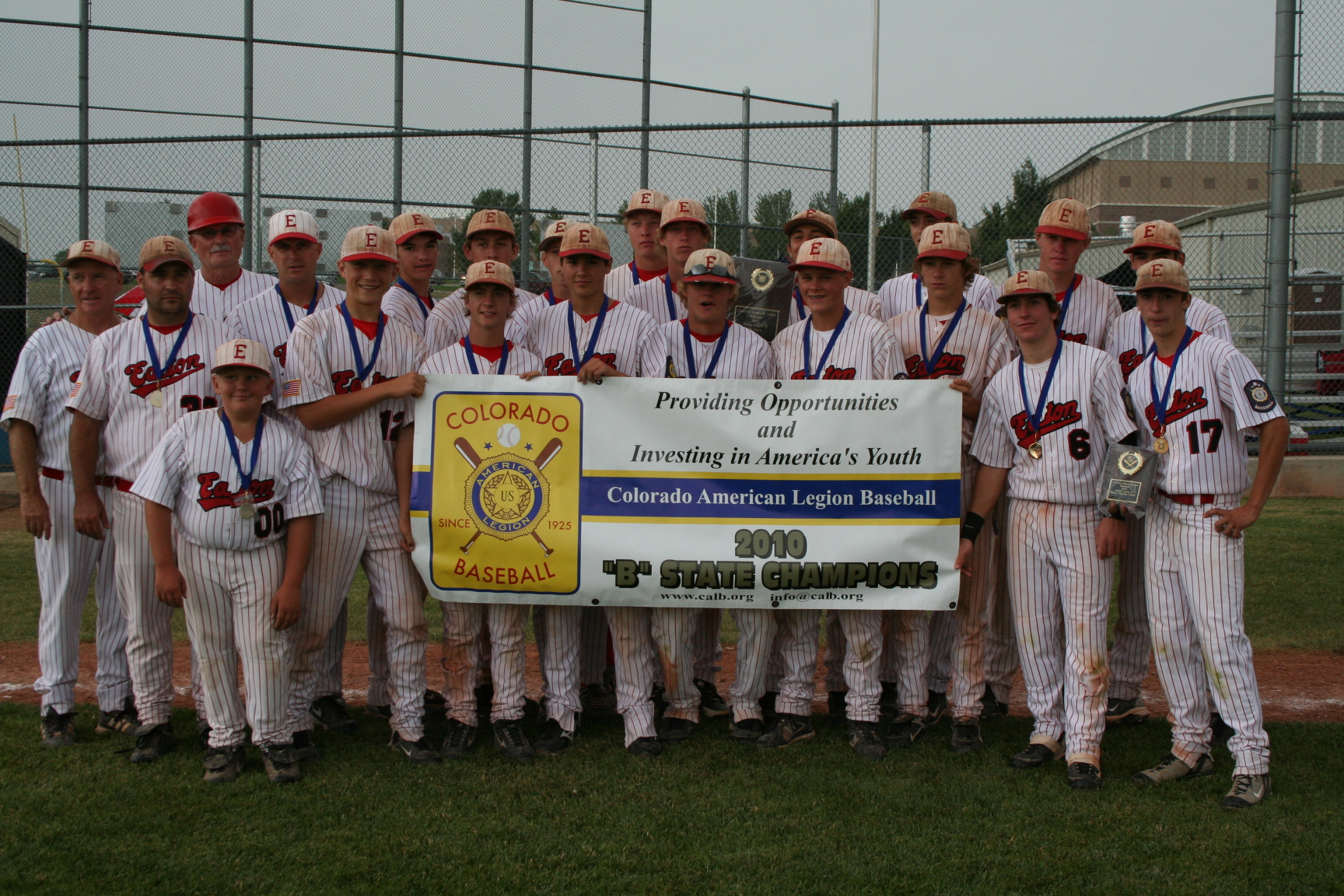