In the District Tournament, the Reds defeated Windsor, Northridge, and Thompson Valley to qualify for the State Tournament.

Game Highlights: Trailing 2-1 in the bottom of the 5th inning, Jake Mondragon and Marcus Longwell drew walks, Colton Lind singled to tie the game, Matt Burkart knocked in the go-ahead run, and Jake Nelson hit a two-out single to give the Reds a 4-2 lead. Adam Mossberg then entered in relief of Longwell and struck out a batter and then Lind threw out a runner at second base on a double steal attempt that ended the inning. After a single and a walk, Mossberg struck out the next two batters on just 6 pitches and then on a double-steal Mondragon threw out the runner trying to advance to home as Lind applied the tag.

Game Highlights: The Reds stormed to a 3-run lead in the first inning with Jake Mondragon and Marcus Longwell hitting doubles, followed by singles from Britten Abbott and Colton Lind, with Matt Burkart knocking in the 3rd run. In the 2nd inning, the Reds took a 4-2 lead as Lane Greiman scored on a bases-loaded walk by Lind. With a 4-3 lead in the 5th inning, Longwell entered in relief of Jake Nelson and shut down Northridge the rest of the way, allowing just one hit and no runs. The Reds added two insurance runs in the bottom of the 6th inning as Longwell singled, Lind tripled, and Burkart singled.

Game Highlights: Trailing 2-0 in the 2nd inning, Matt Burkart led off with a double, Jake Nelson and Bryce Dyer walked, Ryan Koehler singled, Lane Greiman walked, and Marcus Longwell singled to give the Reds a 3-2 lead. Then trailing 4-3 in the 3rd inning, Adam Mossberg entered in relief of pitchers T.J. Griffith and Ethan Kapperman to strike out the side, before the Reds scored 3 more runs as Nelson doubled, Dyer reached on an error, Koehler singled, Greiman walked, and Jake Mondragon singled. The Reds blew the game open in the bottom of the 4th inning with 6 runs as Colton Lind and Burkart singled, Nelson reached base, Dyer walked, Koehler doubled, Greiman was hit by a pitch, Mondragon walked and Longwell singled. After Mossberg struck out the side in the 5th inning, Burkart and Nelson singled and Dyer ended the game with a double as the Reds 10-runned Rampart.

Game Highlights: After Jake Nelson retired the side in order in the top of the 1st inning, the Reds took an early 4-0 lead as Jake Mondragon took a hit by pitch, Marcus Longwell singled, Britten Abbott tripled, and Matt Burkart and Ryan Koehler knocked in runs. Nelson retired the side in order in the 2nd inning, and then after allowing a walk in the 3rd inning, recorded a double play to end the inning. The Reds then exploded for 8 runs, as Nelson reached base, Bryce Dyer singled, Koehler doubled, Lane Greiman singled, Jake Mondragon reached base, Longwell and Colton Lind singled, before Burkart reached base and Nelson hit a 2-RBI single to give the Reds a 12-0 lead. Nelson then retired the side in order in the 4th inning before Koehler and Mondragon singled and Abbott doubled to increase the lead to 14-0. Then with a no-hitter at stake, Nelson struck out the side in order to end the game and become the first Red to ever throw a no-hitter in a State Championship game, needing only 58 pitches, and facing only the minimum of 15 batters to complete the State Championship victory.


Note: This was the youngest Reds' team to ever win the State Championship, with the starting lineup for the championship including one freshman, two sophomores, four juniors, and two seniors. This was also the first time in Eaton history for the Reds to 10-run their final two opponents en route to winning the State Championship. 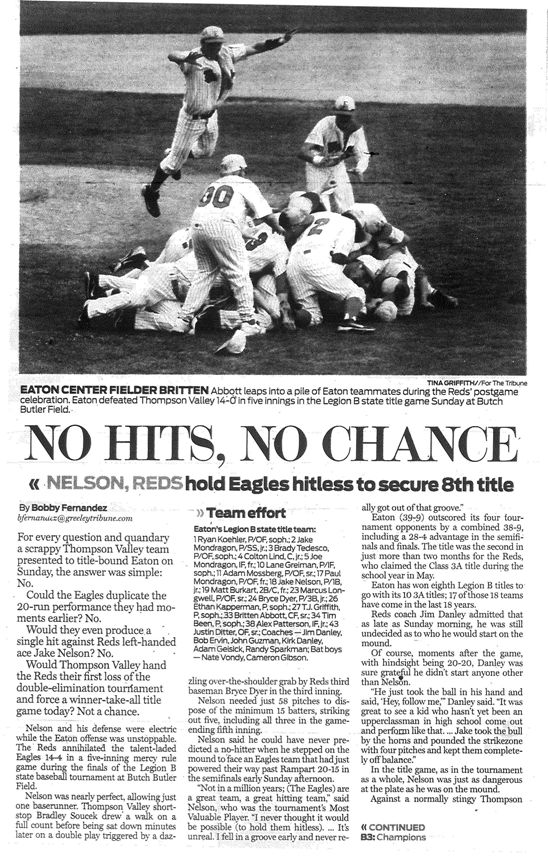 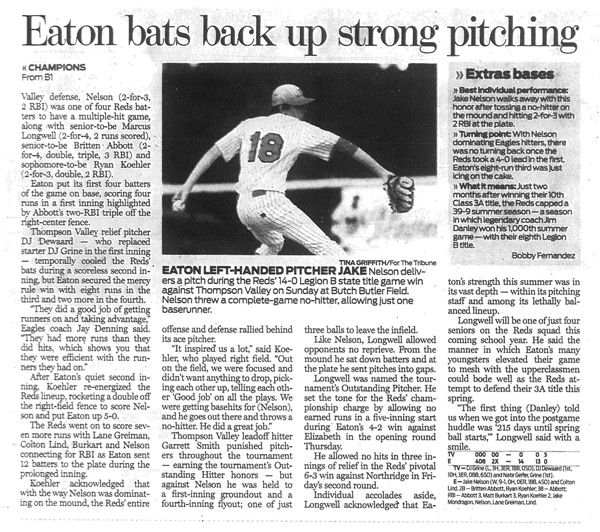 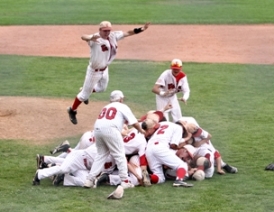