The Reds defeated Academy 6-0 and Middle Park 15-5 in Regionals to then advance to the double-elimination Elite Eight...

1st Inning: Mondragon takes a hit by pitch, followed by singles from Batt, Lind, Abbott and Longwell and a run is knocked in by B. Dyer, Koehler then retires the side in order, Reds lead 4-0

3rd Inning: Mondragon singles, Hager reaches base, Lind, Abbott, and Longwell draw walks before B. Dyer takes a HBP, Nelson then singles, Koehler then retires the side in order, Reds lead 13-2

5th Inning: Mondragon singles, Hager and Batt reach base, Lind, Abbott and Longwell draw walks, and Garretson knocks in run, Koehler records two quick outs and then with the bases loaded records a groundout to end the game, Reds win 19-4

Game Highlights: Against perennial foe Lamar, the Reds benefited from the only sloppily played game in this long-time rivalry; Abbott led the team with 5 RBIs.

Game Highlights: The Reds hadn't lost to Brush in 45 straight games, but this loss forced the Reds to have to defeat Faith Christian the following day and then win three more games the following weekend, it was surprising to nearly everyone to have Faith Christian and Eaton, considered the top 2 teams in the tournament, facing off in an elimination game during the first weekend, but the Reds had a 1-game opportunity to end the season of the previous year's state championship team.

1st Inning: On a controversial play that would have ended the inning, the base runner heading to third leaves the basepath before a tag attempt and then an errant throw to first base gives Faith Christian the first run of the game, Batt reaches on an error but is left stranded at second base, Reds trail 0-1

2nd Inning: C. Dyer retires the side in order, the Reds strike out in order, Reds trail 0-1

3rd Inning: C. Dyer retires the side in order again, the Reds are retired in order, Reds trail 0-1

4th Inning: C. Dyer retires the side in order again, Hager and Batt single, and Hager advances to third base on a ball hit by Abbott and then scores on a wild pitch, Reds tied 1-1

5th Inning: C. Dyer records a flyout, and then after a walk, induces a fielder's choice and a flyout, Hall hits leadoff single but is left stranded, Reds tied 1-1

6th Inning: After allowing a leadoff single, C. Dyer induces a flyout and then a double play to end the inning, Abbott singles with one out and steals 2nd base but then is thrown out trying to advance to third base, Reds tied 1-1

7th Inning: After recording two quick outs, a throwing error places a Faith Christian runner on 2nd base, the next hitter then clearly fouls the pitch off his foot into fair territory, but after no one calls the ball foul, C. Dyer picks it up off-stride and a throwing error gives Faith Christian a 2-1 lead going into the bottom of the inning, Longwell then leads off with a single, then with one out Hall hits a comebacker that the opposing pitcher throws wildly into centerfield attempting a game-ending double play, before Nelson singles to score pinch runner R. Koehler and Nelson advances to second base on the throw home, Mondragon squares to bunt and slashes a grounder through the infield to score the game-winning run, Reds win 3-2

Game Highlights: The Reds faced Faith Christian's ace pitcher in a must-win game, and C. Dyer outdueled him allowing zero earned runs, providing the Reds an opportunity to win after a throwing error positioned the Reds for another great walk-off victory in the State Tournament.

2nd Inning: C. Dyer retires the side recording his 4th strikeout in the first two innings, Abbott walks and scores on a two-out single by B. Dyer, Reds lead 9-0

4th Inning: C. Dyer retires 3 of 4 batters to end the top of the inning, Hall singles with two outs but is left stranded on base, Reds lead 10-1

5th Inning: C. Dyer allows one run before a strikeout and popout end the top of the inning, Hager singles and then with two outs, Abbott hits walk-off home run to end the game via mercy rule, Reds win 12-2

Game Highlights: The Reds took an early lead 1-0 lead in the first inning and then with two outs put the game away with 7 more runs to end the first inning, while C. Dyer never allowed any kind of rally to get started.

1st Inning: C. Dyer strands runners on 2nd and 3rd base with a flyout, Mondragon leads off with a double, then Hager doubles, Reds lead 1-0

2nd Inning: C. Dyer limits the damage to two runs with a groundout and flyout after two runs scored, Longwell reaches base, then B. Dyer walks, and Nelson knocks in a run on a safety squeeze bunt, Reds tied 2-2

3rd Inning: Koehler takes the mound in relief and retires 3 of 4 batters, Hager singles but is left stranded, Reds tied 2-2

4th Inning: Koehler retires the side in order, Longwell and B. Dyer single and then Hall knocks in Longwell to take the lead, Reds lead 3-2

5th Inning: Koehler records a flyout, then after a hit by pitch, induces another flyout and then a pickoff from 2nd base to end the threat, Reds lead 3-2

6th Inning: Koehler strands two runners on base with a groundout to first base to end the top of the inning, B. Dyer doubles and Nelson singles to give the Reds an insurance run, Reds lead 4-2

7th Inning: Koehler induces a flyout, then after a walk, strikes out the next two batters to end the game and send the Reds on to the State Championship Game, Reds win 4-2

Game Highlights: In a typical hard-fought Eaton-Lamar game, the Reds got timely hits and C. Dyer and Koehler combined to shut down Lamar with no runs allowed in the final 5 innings of the battle.

Eaton's 10th title in 3A baseball comes with sigh of relief 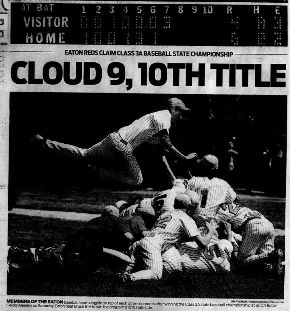 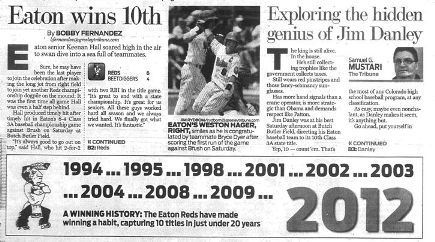 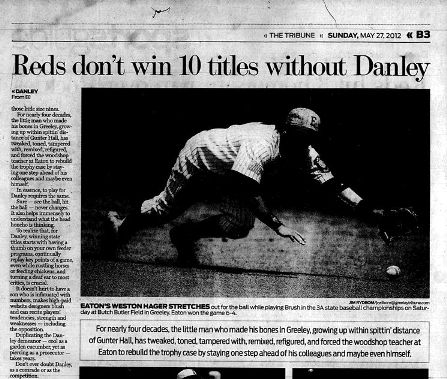 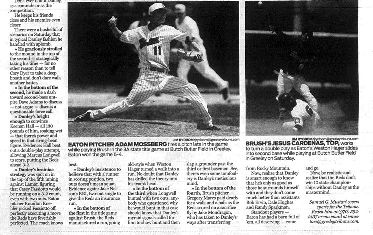 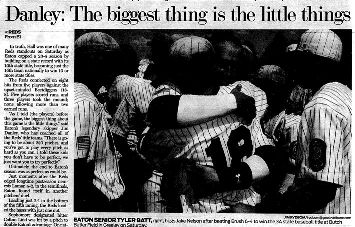 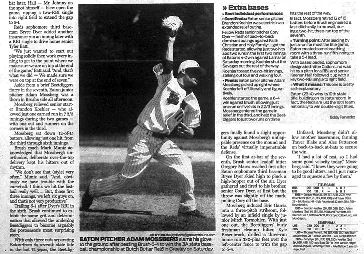 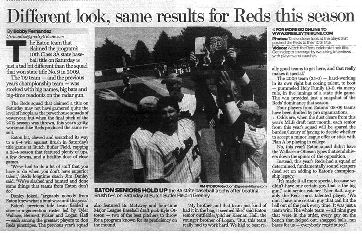 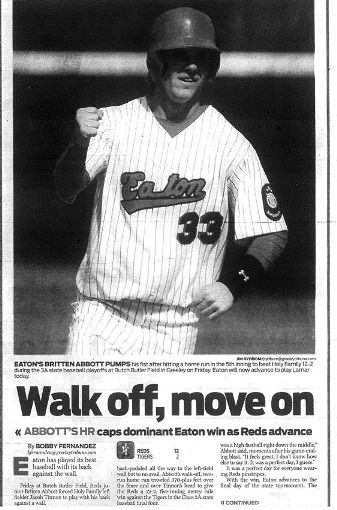 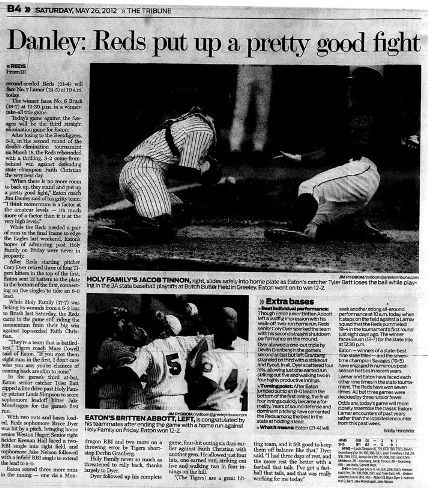 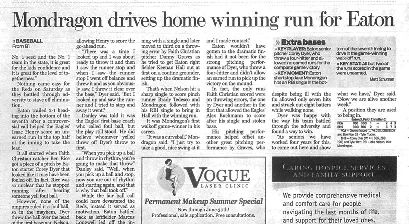 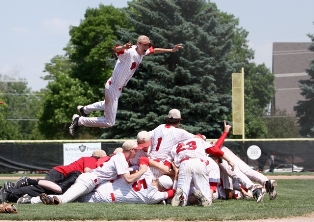 1st Inning: After allowing two singles to start the game, Koehler induces a double play and then a groundout, Hager and Batt walk and Abbott singles in the game's first run, Reds lead 1-0

3rd Inning: After a couple of hits to start the inning, Mossberg takes the mound in relief and induces a sacrifice fly and then a strikeout to keep the game tied, Hager singles and B. Dyer walks but they are left on base, Reds tied 1-1

4th Inning: Mossberg retires the side in order, Hall walks, Nelson singles, and Mondragon hits a sacrifice fly to give the Reds the lead, Reds lead 2-1

5th Inning: Mossberg retires 3 of 4 hitters, Batt leads off with a single, then B. Dyer singles, C. Dyer draws a walk, Lind takes a hit by pitch, and Hall singles as the Reds score 3 runs to take a commanding lead, Reds lead 5-1

6th Inning: Mossberg again retires 3 of 4 hitters, Batt singles, Abbott reaches on an error, and B. Dyer singles to give the Reds another insurance run, Reds lead 6-1

7th Inning: With one out and two runners on, a wind-blown home run cuts the Reds lead to 6-4, but then Mossberg strikes out the next two batters to end the game and send the Reds to their 10th spring State Championship pileup, Reds win 6-4

Game Highlights: Koehler got the Reds into the 3rd inning in a tie game before Mossberg simply closed the door on Brush, striking out 10 batters including the final four outs of the game. The Reds had a balanced offensive performance in which 8 starters had a hit, run scored, and/or RBI in the game. This is the first time since Class 3A went to a double-elimination format in 2007 that the undefeated team after the first weekend failed to win the State Championship, as the Reds battled back against tough opponents to win the necessary 4 straight games to secure the Title.