Game Highlights: After earning a first-round bye, the Reds storm to a 5-0 lead in the first inning off a 3-run home run from Matt Burkart and two-run triple from Joe Mondragon, before Roosevelt cut the Reds’ lead to 5-2 in the 4th inning when starter Brady Tedesco stranded two runners on base, before the Reds blew the game open with big innings in the 5th and 6th innings to end the game.

Game Highlights: After allowing one run in the top of the 1st inning, the Reds scored the next 20 runs unanswered, with 4 runs in the bottom of the 1st inning with doubles by Lane Greiman and Matt Burkart and a triple by Joe Kuhn. The Reds then put the game away with 9 runs in the 3rd inning after drawing 8 walks, and scored another 7 runs in the 4th inning. Ryan Koehler threw a complete game allowing just 4 hits and 2 walks to send the Reds to the State Championship Game the following day.

Game Highlights: A Reds’ 4-2 loss to Brighton the previous day set up a rematch of these teams, in a winner-take-all State Championship “If” Game. Tied 0-0 in the bottom of the 2nd inning, Sean Carson hit a solo home run, while starter Brady Tedesco kept Brighton off the scoreboard through 4 innings. After Brighton took a 2-1 lead in the top of the 5th inning, closer Lane Greiman took the mound and shut down Brighton the rest of the way allowing no hits and no walks, while Dalton Lind singled to score Carson to tie the game in the bottom of the 5th inning, and then pinch runner Jake Vondy scored the go-ahead run. Ryan Koehler knocked in another RBI for an insurance run in the bottom of the 6th inning, before Greiman earned another strikeout to end the game and send the Reds to the 3rd State Championship pileup on their home field in history (also in 2013 and 2008). 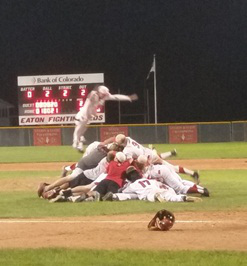