Note: The first 20 pileups in Eaton history all occurred with the Reds on defense. This championship, the Reds' 21st, was the first in which the Reds were the home team and needed a run in the final inning, and did just that, sending the Reds to their first walk-off pile-up celebration. It also marked the 6th time that the Reds won both the spring and summer State Titles in the same year, and would later go on to be determined to be the Reds' last State Championship under Coach Danley.

Game Highlights: Facing the tournament host in the first round, the Reds opened the 1st inning with a two-run home run from Joe Mondragon to give starter Preston Donlon the lead. The Reds then fell behind 3-2 entering the 5th inning, before Jake Vondy and Breydan Stover walked, JT Mossberg singled to tie the game and Sean Carson and Dalton Lind hit sacrifice flies to give the Reds a 5-3 lead. In the 7th inning, Lind entered in relief to retire 3 of 4 batters to advance the Reds.

Game Highlights: In a game in which the Reds sought to end the battle early to save back their pitcher for later in the tournament, the Reds did just that with two runs in the 1st inning, and 5 runs in the 2nd inning after a grand slam by Sean Carson. The Reds added 3 runs in the 3rd inning to take a 10-0 lead and be able to pull starter JT Mossberg. The Reds held on for a 12-2 win in 5 innings via the 10-run mercy rule.

Game Highlights: Dalton Lind was nearly perfect through 4 innings on the mound, but Rock Canyon had manufactured a 1-0 lead, until Lind doubled and Joe Kuhn singled him in with two outs to tie the game in the 4th inning. In the 5th inning, JT Mossberg doubled Dallas Duran home with two outs to give the Reds a 2-1 lead. In the 6th inning, Rock Canyon took a one-run lead, but in the bottom of the 7th inning, still trailing by a run, Breydan Stover doubled and Mossberg doubled to tie the game, and then with two outs, Sean Carson singled up the middle to win the game.

Game Highlights:A Reds' loss to Rock Canyon the previous day set up the 3rd and final matchup of these teams in the tournament, in a winner-take-all State Championship "If" Game. With the Reds' shortstop pitching this game, the Reds' started incoming freshmen at shortstop (Nate Vondy) and third base (Dallas Duran) for the first time in a championship game since 1996; both played flawlessly. Mossberg stranded two runners in scoring position in the top of the 1st inning to limit the damage to just one run allowed, before the Reds rallied with two outs in the bottom of the inning with a 3-run home run from Dalton Lind. The Reds added 2 runs in the 2nd inning and 2 more in the 4th inning, but Rock Canyon scored a total of 3 runs in the 3rd and 4th innings to send the Reds into the 7th inning with a 7-4 lead. Rock Canyon tied the game in the top of the 7th inning, but in the bottom half of the inning, with two outs, Joe Mondragon doubled, and Sean Carson singled up the middle to score Mossberg and send the Reds to their 21st State Championship pileup. 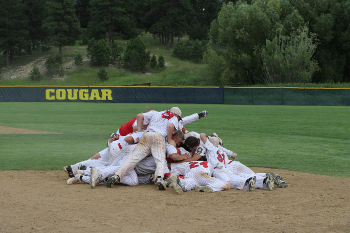