Note: The Reds were ranked highly nationally throughout the 2015 season, and would go on to be selected as the CBS Sports' MaxPreps National Champions for all schools under an enrollment of 1,000. The Reds would finish the season ranked #17 in the nation amongst all classifications, finishing just behind the Reds' #16 national ranking after the Reds' won the 2009 State Championship (which in 2009 would later fall to #40 after other states finished all of their games, though still highest in the nation for small schools in 2009).

The Reds defeated Arrupe Jesuit 10-0 and Lutheran 5-1 in Regionals to then advance to the double-elimination Elite Eight...

4th Inning: Reds leave one runner on base, Koehler retires the side in order, Reds lead 8-0

Game Highlights: Koehler faces just two batters more than the minimum, and the Reds offense put the game away early.

3rd Inning: Lind retires the side in order after Greiman and Mossberg turn a double play, Reds leave Greiman on base, Reds tied 0-0

5th Inning: Lind retires the side in order, Koehler leads off the inning with a home run, Reds lead 2-0

6th Inning: Lind retires two batters, then Greiman enters in relief to end top half of the inning, Reds leave Tedesco on base, Reds lead 2-0

7th Inning: Greiman retires the side in order to end the game, Reds win 2-0

Game Highlights: Lind allowed only one hit through 5+ innings, before Greiman earned the save, giving the Reds a win to guarantee the Reds' 23rd straight Final Four appearance the following weekend, but this weekend the Reds still had one game left to play.

2nd Inning: Lind doubles, Tedesco reaches on an error, Greiman walks, and Koehler hits sacrifice fly, Tedesco retires the side in order after starting a double play to end the inning, Reds lead 3-1

4th Inning: Reds leave Tedesco and Greiman on base, Tedesco retires the side in order, Reds lead 3-1

5th Inning: Reds leave Mondragon and Carson on base, Greiman enters in relief and gets 2 K's while retiring the side, Reds lead 3-1

7th Inning: Reds leave Kuhn on base, Greiman retires the side in order after inducing a game-ending double play, Reds win 3-1

Game Highlights: Tedesco scattered 3 hits and Greiman closed out the win to guarantee the Reds their 20th State Championship Game Appearance in past 25 years, to be played the following weekend.

1st Inning: Reds are retired in order, Lind allows one run but strands a runner in scoring position, Reds trail 0-1

7th Inning: Mossberg singles, Koehler doubles, and Mondragon reaches on an error, Kapperman enters in relief and after allowing 3 runs earns a groundout to end the game, Reds win 13-6

Game Highlights: The Reds blew the game open in the 4th inning with 6 runs and ended the game with 3 more runs the following inning, while Lind held down Sterling with just 5 hits in the early innings while the outcome was still in question, advancing the Reds to the State Championship Game with an undefeated record, allowing the Reds to just have to win one of the next two games to clinch the State Championship.

Game Highlights: In a game the Reds didn't have to win, by virtue of being undefeated in the tournament (and on the season), the Reds took an early 2-0 lead but ended up losing 4-3, but force the opposing ace pitcher to throw 155 pitches, setting themselves up with the Reds' ace on full rest against a tired Brush pitching staff in the following winner-take-all game. 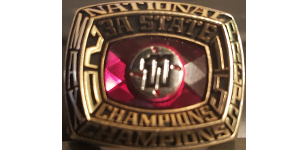 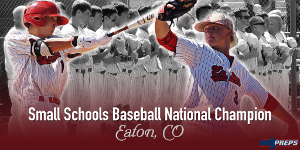 1st Inning: Greiman walks, advances to 2nd base, and scores on single from Burkart, Brush then ties the game on a passed ball, Reds tied 1-1

3rd Inning: Carson singles, Kuhn walks, Tedesco knocks them both in on a double, Koehler retires 3 of 4 batters, Reds lead 4-1

6th Inning: Reds leave Mondragon on base, Koehler strikes out the side, Reds lead 7-1

7th Inning: Reds leave Mossberg on base, Greiman enters in relief with two runners on base and one out, gets strikeout, and then with bases loaded, induces a flyout to leftfielder Carson to end the game, Reds win 7-1

Game Highlights: Koehler didn't allow a multi-hit inning until the 7th inning, and only allowed two walks against 6 K's in a dominant pitching performance, before Greiman came in to shut down Brush once again in the final frame, something Greiman did throughout the entire season and postseason in entering any time the game was in doubt to earn the 2015 3A Player of the Year award for himself, and the Reds the state-record 11th State Championship, all earned within the past 22 seasons. This was also the Reds' 20th State Championship pileup since 1994 in spring and summer State Tournaments.