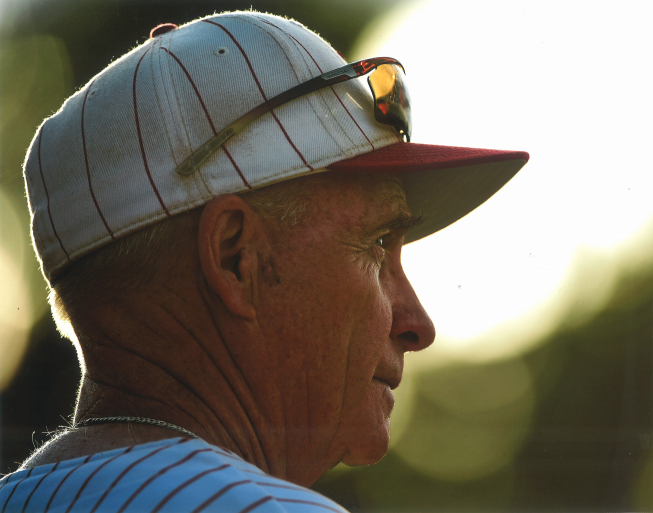 For the first time in nearly a half-century (1969) the paths of the Danleys and the Eaton Reds Baseball Program will diverge. We are headed to Littleton High School to help create new enthusiasm for a program that has experienced the ups and downs of an unsteady climb. We leave a program that has soared to a record 11 state championships, and last year, to a CBS MaxPreps National Championship.

We could never forget the wonderful people of Eaton and the warm friendships we have encountered over the years. The thousands of unbelievably great memories (from a 2-19 summer season in 1970 to the present successes) will always remain with us. We salute the several hundred players who have proudly worn the pinstripes for over 4 1/2 decades, and we thank the parents and fans for their unremitting support for our teams, players and coaches. Speaking of coaches, we thank the best group of assistant coaches in both the high school and summer seasons that we could have ever imagined. They were the men who made it possible for us to do what no other baseball team in Colorado has ever done.

Finally, our thanks to the entire community for recognizing the importance of demanding excellence from our youth, so that, as our players leave high school to enter the competitive business world, they know the value of discipline, mental toughness, hard work, honorable dealings, and high achievement.

It’s been the honor of a lifetime to have been entrusted with the Eaton Baseball Program.

As the pitching coach at Littleton in 2016 and 2017, Coach Danley helped lead the team to numerous huge upset victories—including over the defending 4A State Champions in both years, Littleton’s first appearance in the state rankings in decades, and to be the last team standing between eventual State Champion Valor Christian and a league title in 2017, before Littleton then defeated Valor in the league tournament the following week.

In the summer of 2016 at the Legion A High School State Tournament, Coach Danley won his 2,000th game as a head or assistant coach.

As the head coach in the summer of 2017, Coach Danley and his son Kirk led Littleton to their 2nd consecutive Legion A High School League Championship following a sweep of Eaton (coincidentally on the same day that he delivered his 2nd eulogy at Eaton within the past 18 months), and returned to Eaton for the State Tournament as the #1 seed, defeating Eaton via the mercy rule to end the Reds’ season in what now appears to be the last game Eaton would ever compete in Legion A.

Coach Danley then retired and now gives individual pitching instruction to the sons of former players and even former adversaries that he once coached against, at no cost.

July 29, 2017: "Danley shows Eaton the door in bittersweet homecoming as Lions eliminate Reds in Legion A tournament" -- by Samuel Mustari

From his jersey retirement ceremony in Eaton in June 2019:

“What we tried to do was to get things right, and do things as close to perfectly as you can. And if you learn that lesson in life, and you learn to treat people well, you’ve gone a long way toward doing what’s necessary, and making your own life a happy one. All these people here, have made my life a very happy one, and it’s been very rewarding.”

“The people of Eaton…came in with tractors, all kinds of farm machinery, we had people that they commandeered from one end of the town to the other and by 2 or 3pm all the water was gone and they had solved our problem for us, and we got to face that pitcher (who went on to a 15-year Major League career) on our field because of the people of Eaton. And by the way, we beat him, 2-1 in a game that I think those guys will never forget—one of our first really big victories.”

“But it was the people of Eaton that made that possible. This just doesn’t happen in other places. Towns rarely go to the lengths that these people do, and almost never do you see the kind of togetherness in a place like you see here. So it was a privilege for me to be here, I knew it at the time, why would I ever leave a place like this…great people, you just heard from some of them, and that’s only a few, there’s another 300 just like them—wonderful, wonderful kids—and it’s been the privilege of my life to be here.”

Over the past 35 years, I have frankly been blessed with the greatest opportunity that one could ever imagine, from growing up in the Reds dugout as a batboy with my heroes and mentors, to playing for the Reds, and then coaching the mighty Reds.

I am forever indebted to the 1980’s varsity players who were my coaches as a youth, and who instilled in my teammates and me the mental toughness, competitive drive, work ethic, dedication, and great desire to reach remarkable success, which they did on the playing field and thereafter in their careers and lives. They instilled in us the character to give back to the program in whatever way possible, and that is what many of us, including myself, have done for many years now.

While I will miss Eaton Baseball greatly in the years to come, that loss will be more than compensated for by the memories of what a bunch of tough kids in a small farming community were able to accomplish.

The 21 spring and summer state championships since 1994, the 23 straight final fours, the numerous win streaks, and 37 straight years as league, regional, and/or state champions, will be what outsiders remember; those who had the privilege to be inside the dugout have taken away much more lasting experiences and lessons than simply these outward validations of success. This couldn’t have happened just anywhere — the Town of Eaton should be eternally proud of the community and parents that raised these young men to achieve greatness.