1st Inning: Griffith retires the side in order, then Garretson singles, Ginther and Trujillo both draw full-count walks, and Tateyama knocks in Garretson before the inning later ends on a double play, Reds lead 1-0

2nd Inning: Griffith needs only 7 pitches to retire the side in order, the Reds then go down in order as well, Reds lead 1-0

3rd Inning: After a strikeout, Griffith allows a single but then induces a groundout and a strikeout to strand the runner at 2nd base, the Reds then go down in order, Reds lead 1-0

4th Inning: Griffith strikes out 3 batters in the inning to leave a runner at first after a single, Tateyama singles and Kelly reaches on a fielder's choice but then is thrown out trying to reach third base following a Middle Park error to end the inning, Reds lead 1-0

5th Inning: Griffith records two outs on just two pitches, then after a hit by pitch, strikes out the final batter of the inning, the Reds strand Garretson at first after a two-out walk, Reds lead 1-0

6th Inning: Griffith gets the leadoff out by covering first on a ball that second baseman Noblitt gets to, then after a strikeout bounced away from Ginther to allow the batter to reach, Griffith induced a groundout and a 3-pitch strikeout to end the threat, the Reds then went down in order, Reds lead 1-0

7th Inning: Griffith induces a groundout to third baseman Swain for the first out, then records a strikeout, and then a groundout to shortstop Trujillo to end the game, Reds win 1-0

Game Highlights: Griffith was great, and needed to be, after the seeding committee sent one of the State's top pitchers to face the Reds in the first-round game, the Reds didn't manufacture much offense, but did what they needed to with the first 4 batters of the game and played great defense to make the slim 1-0 lead hold up as Griffith rarely got into any trouble at all facing just 4 batters over the minimum and only allowing two of them to reach second base and no runners to ever reach third base 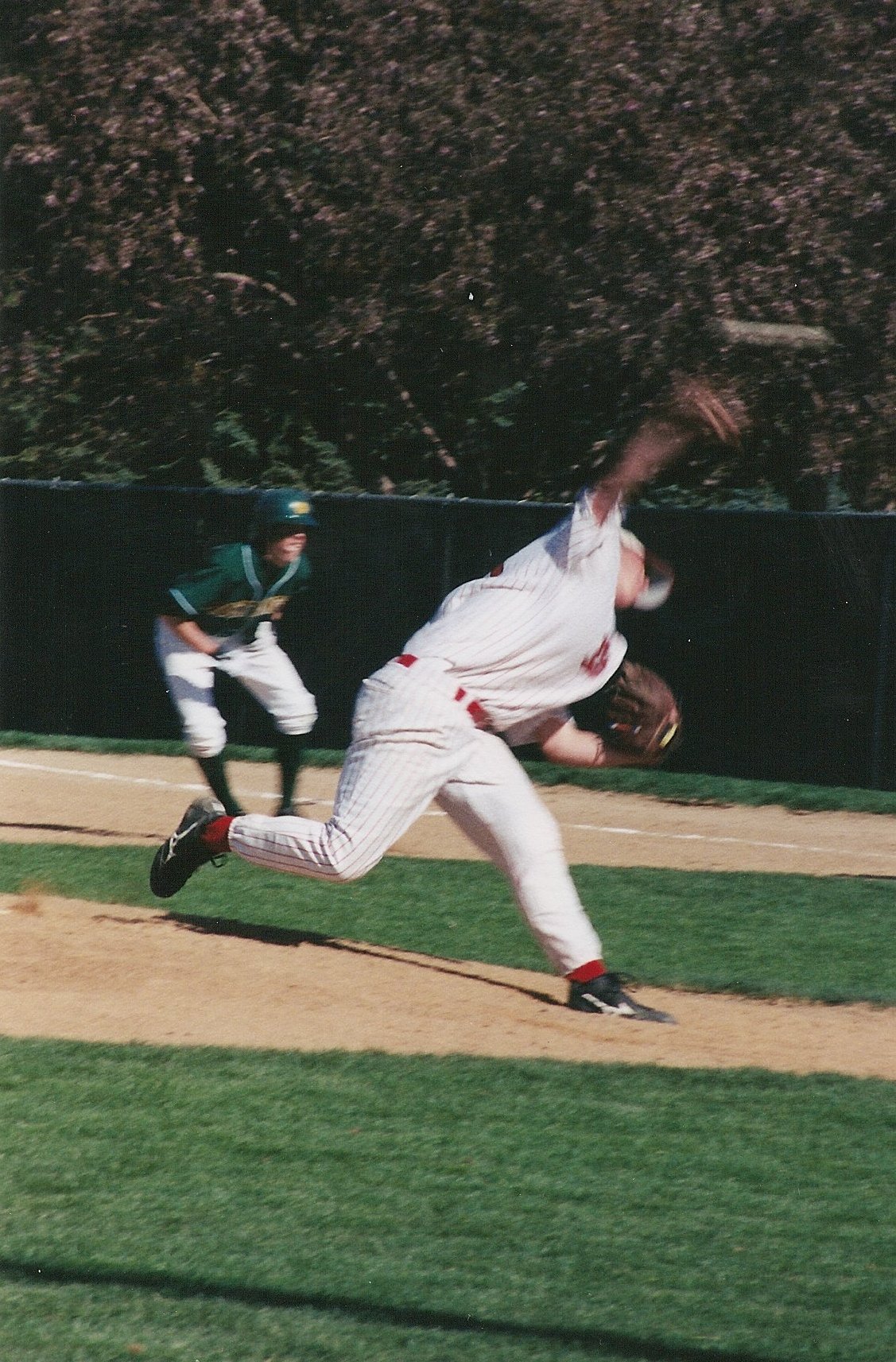 1st Inning: Garretson singles and Ginther reaches on a fielder's choice before Trujillo, Tateyama, and Kelly single and Swain drives in a run to give the Reds an early 2-0 lead, Dominguez then enters the game in relief after the first four batters reach base, and after allowing a single, goes on to retire the next three batters via a strikeout and two groundouts to first base to limit the damage, Reds trail 2-5

2nd Inning: Krause draws a walk, Garretson and Ginther single and Trujillo hits a sacrifice fly to knock in a run before Tateyama hits a ball that scores Garretson but gets Ginther thrown out at the plate trying to tie the game, Dominguez gets the first out, then allows two singles that give University another run, but then needs only 5 pitches to record the final two out to end the inning, Reds trail 4-6

3rd Inning: With one out, Swain singles, Maulsby singles, Krause reaches on a fielder's choice, Noblitt walks, Garretson reaches base Barrios walks, and Trujillo hits a 3-run triple to give the Reds the lead, Dominguez then retires the side in order, Reds lead 9-6

4th Inning: Maulsby hits a two-out single, Krause and Noblitt walk and Garretson delivers a 2-RBI single, Dominguez then gets two quick outs, hits a batter and ends the inning on a groundout to third baseman Swain, Reds lead 11-6

5th Inning: Tateyama singles but is left at first base, after allowing a leadoff single, Dominguez induces a flyout, strikeout, and groundout to end the inning, Reds lead 11-6

6th Inning: Krause singles but is forced out on a fielder's choice, Dominguez records a strikeout, then allows a single, but induces an inning-ending double play turned by Trujillo and Noblitt, Reds lead 11-6

7th Inning: Trujillo doubles but is stranded at second base, Dominguez allows a single but then induces a flyout to rightfielder Tateyama, grabs a comebacker for the second out, and then strikes out the final batter of the game, Reds win 11-6

Game Highlights: Dominguez entered the game in a tough spot in the 1st inning, but limited the damage and then scattered just a handful of hits and only one run the rest of the way to allow the Reds to mount a comeback led by Trujillo's 3-run triple and Garretson's 2-run single, turning a big deficit after one inning into an easy win only two innings later; the Reds though lost top hitter, and catcher, Ginther on a play at the plate that broke his forearm and ended his season 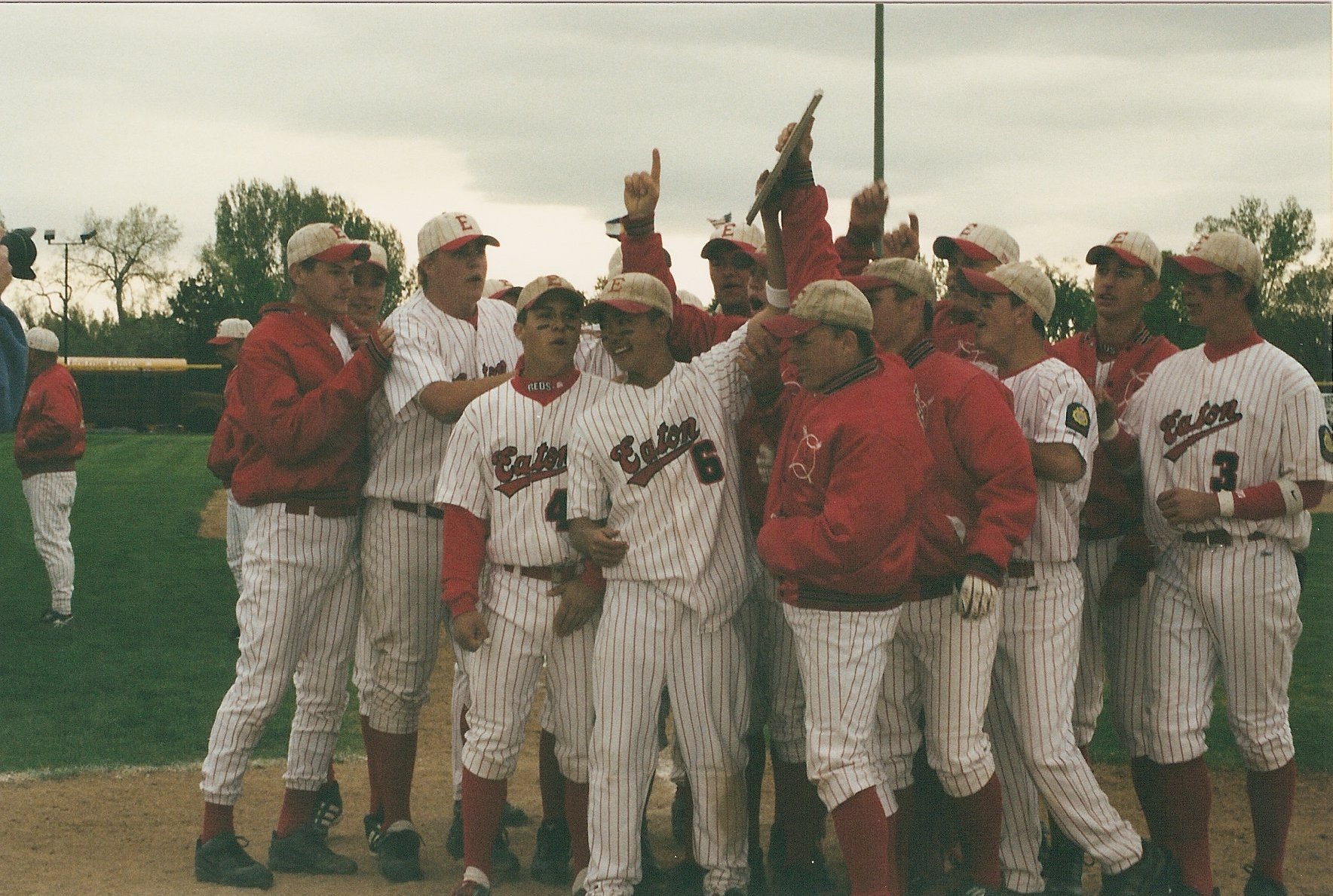 1st Inning: Both teams go down in order, with Hungenberg needing only 6 pitches to retire the Lutheran hitters, Reds tied 0-0

2nd Inning: Maulsby walks and Ramer triples him in to give the Reds an early lead, Hungenberg sets the side down in order again, Reds lead 1-0

3rd Inning: Tateyama reaches on a two-out error and scores on a double by Kelly, Hungenberg then retires the side in order again, Reds lead 2-0

4th Inning: Ramer and Krause walk, Noblitt reaches on an error, and Garretson and Trujillo knock in a run, Dominguez enters the game in relief after a couple hits allowed to start the inning, and immediately records a couple strikeouts, though one batter reached as the ball bounced away leading to another run before Dominguez ended the rally with a flyout to leftfielder Tateyama, Reds lead 4-3

5th Inning: The Reds leave the bases loaded after a walk to Kelly and hit by Maulsby and walk to Krause, Dominguez strikes out the first batter and then records two groundouts to third baseman Swain to set Lutheran down in order, Reds lead 4-3

6th Inning: Garretson and Trujillo single, and Tateyama and Kelly knock in runs on errors after a wild pitch scores Garretson, Dominguez retires the side in order, Reds lead 7-3

7th Inning: The Reds go down in order, Dominguez induces a popout to catcher Krause, records a strikeout and then a groundout to shortstop Trujillo to end the game, Reds win 7-3

Game Highlights: Dominguez again came in to shut the door after the Reds took an early lead on a triple from Ramer and double from Kelly, the Reds then put together great at-bats and took advantage of poor fielding from Lutheran to secure the victory by a comfortable margin 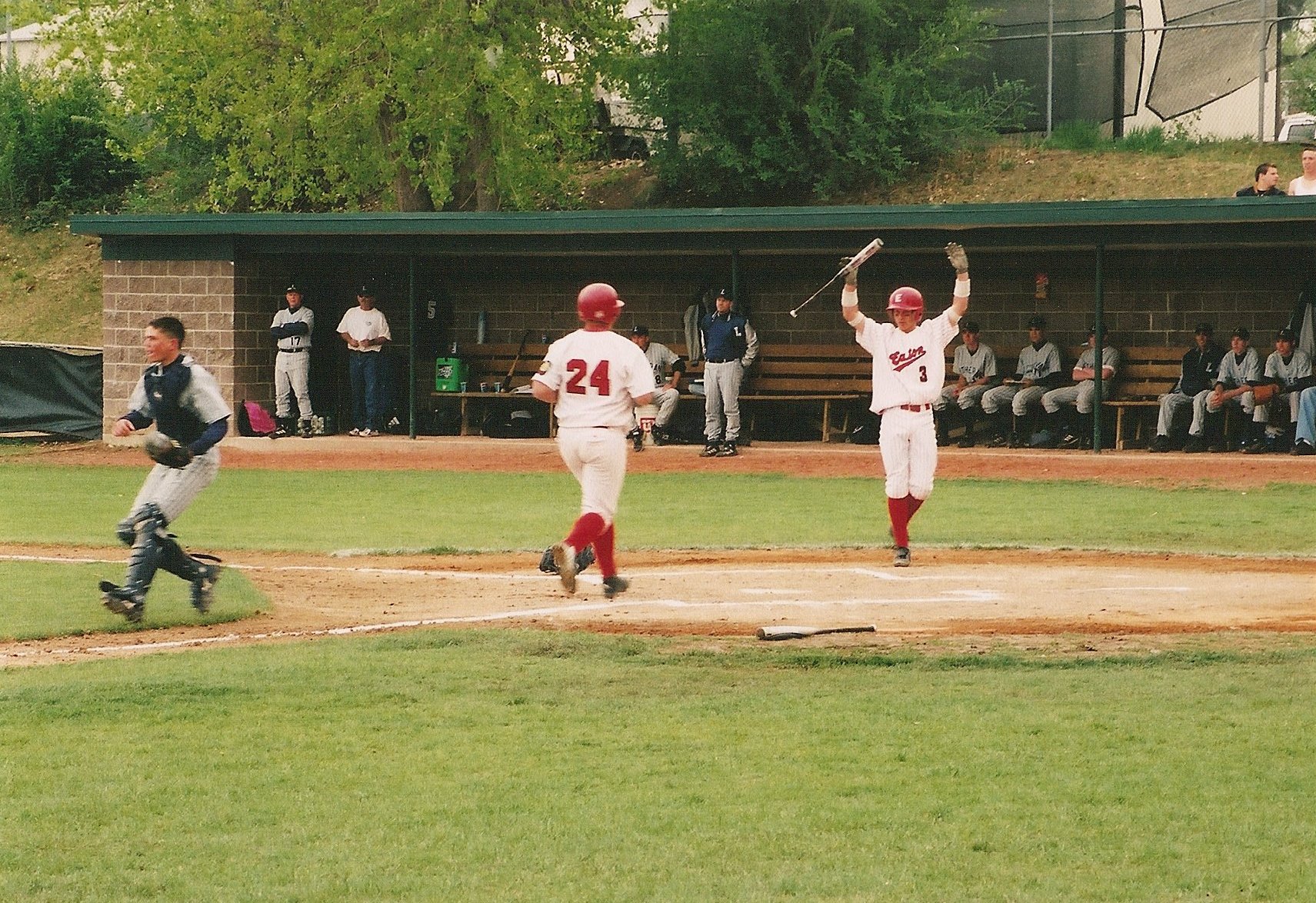 1st Inning: After allowing a leadoff single, Griffith records a strikeout and then an inning-ending double play turned by shortstop Trujillo, Garretson walked and moved to second base on a single by Kelly but was left stranded there, Reds tied 0-0

2nd Inning: Griffith walks the leadoff batter, but then comes back with two strikeouts, then a hit by pitch, and then another strikeout to end the threat, Ramer and Swain walk and Garretson singles to knock in the first run of the game, Reds lead 1-0

3rd Inning: Griffith gets two quick outs, then allows a single before inducing a groundout to Swain, Kelly leads off the inning with a double, then Maulsby reaches on an error, Ramer knocks in Kelly on a sacrifice fly, then Swain singles, Krause reaches on an error, and Noblitt knocks in a run on a sacrifice fly, then Garretson walks, Trujillo singles in 2 more runs, Tateyama singles in a run, Kelly hits a monster 3-run home run, and Maulsby doubles as the Reds put the game out of reach, Reds lead 9-0 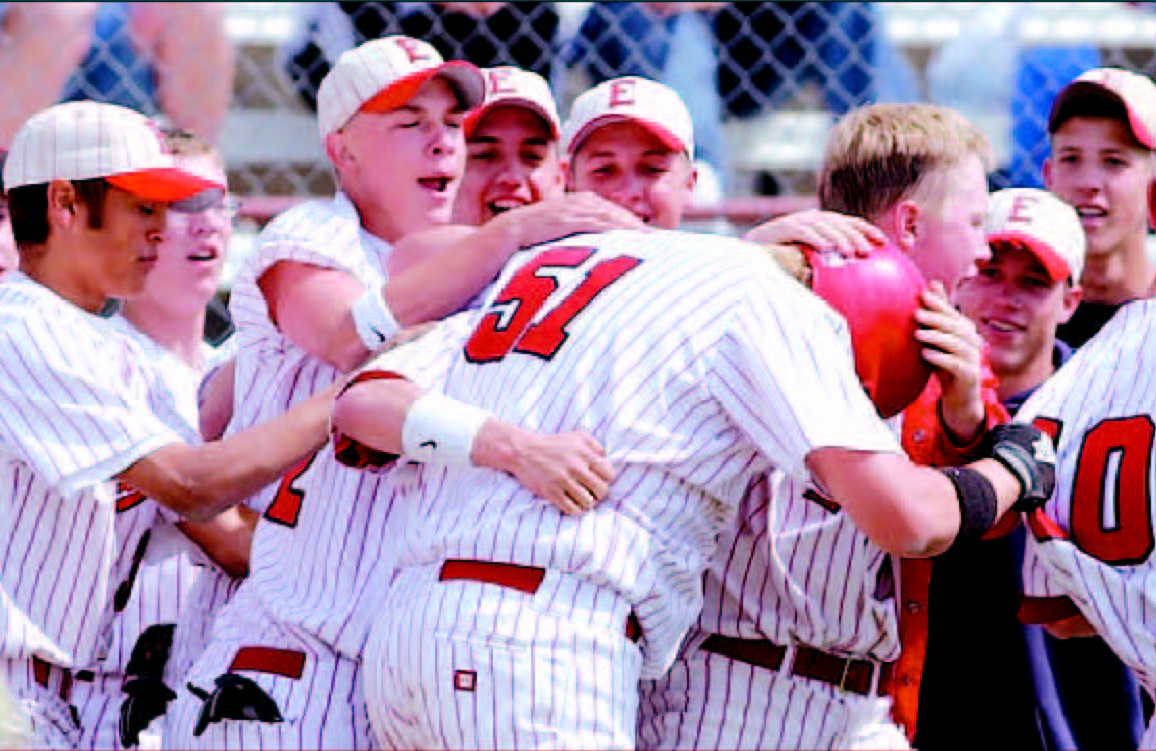 4th Inning: After allowing a leadoff walk, Griffith induces a flyout, then allows a single, then strikes out the next two batters, Swain leads off with a single, Krause walks, Noblitt singles, and Garretson, Trujillo, Tateyama and Maulsby draw walks, Reds lead 12-0

5th Inning: After allowing a walk, Griffith strikes out the next batter on 4 pitches, then records a 3-pitch strikeout, and then induces a 3-1 flyout to centerfielder Garretson to secure the win, Reds win 12-0

Game Highlights: Griffith was dominant against a team that had been putting up a lot of runs and was pitching well enough to win a 1-0 battle, but didn't need to as the Reds' offense exploded for 8 runs in the 3rd inning, capped off by a 3-run home run by Kelly, to put the game out of reach and give the Reds, a huge underdog coming into the game against senior-laden Denver Christian, their easiest State Championship victory to-date needing only 5 innings to secure the State Championship Trophy 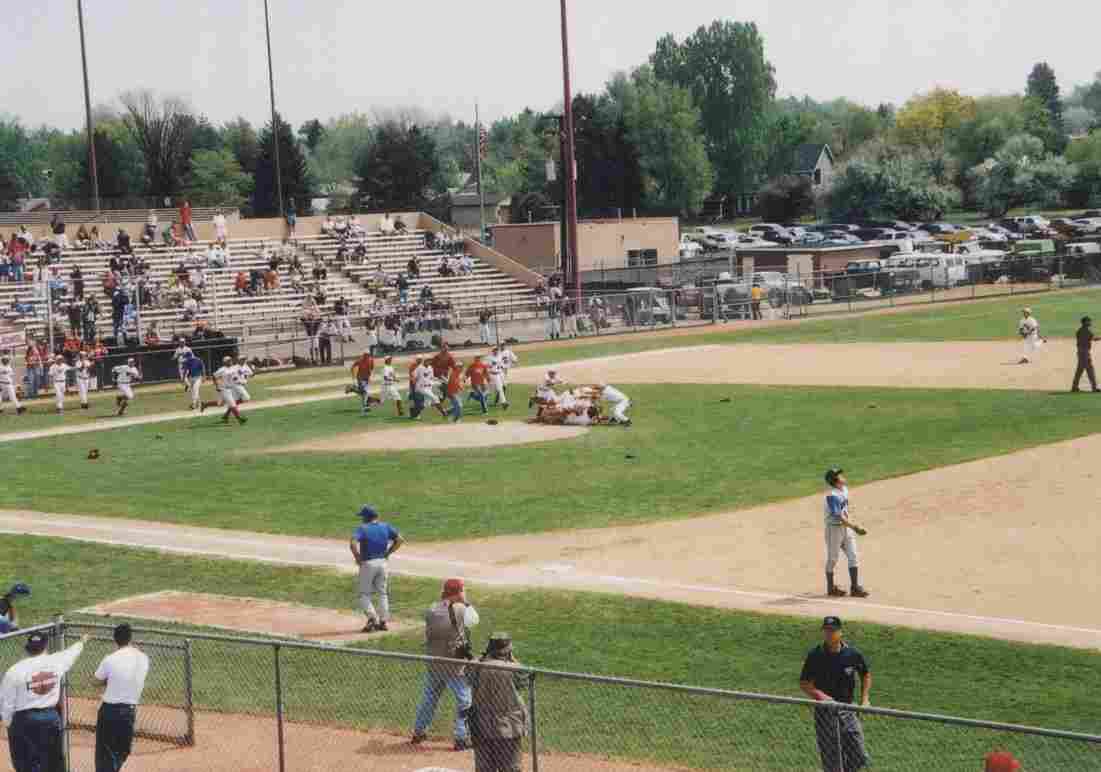 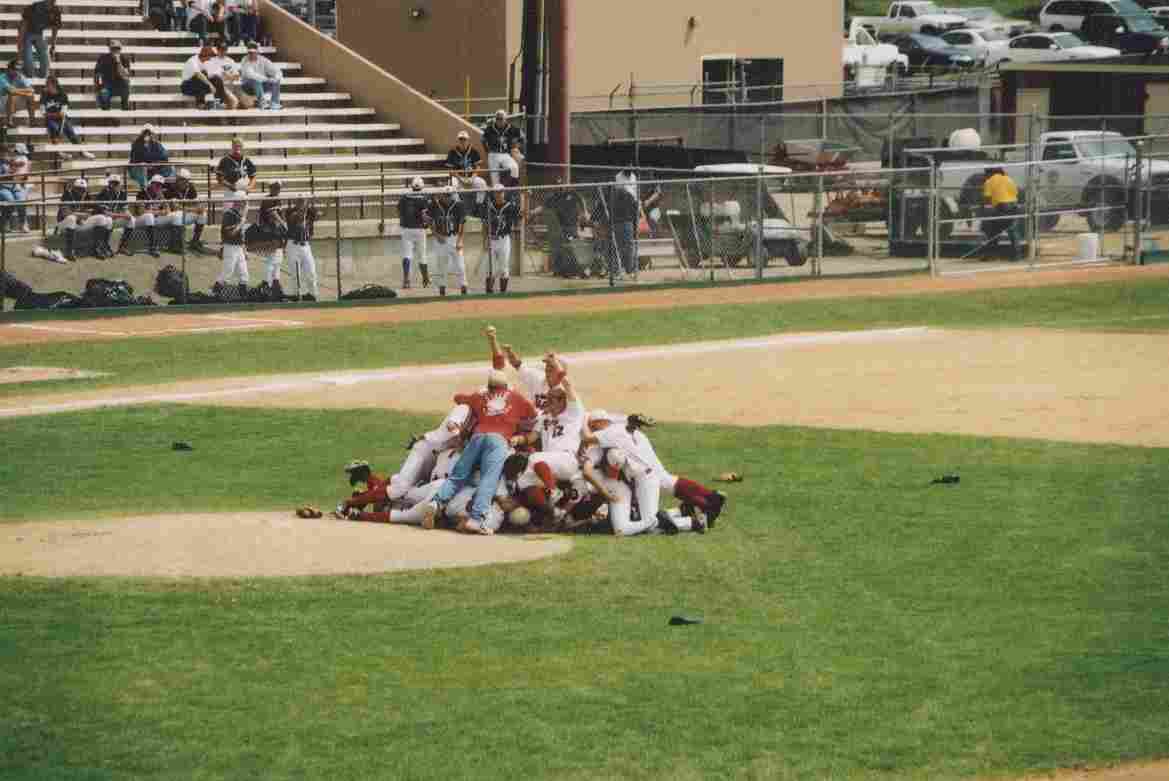 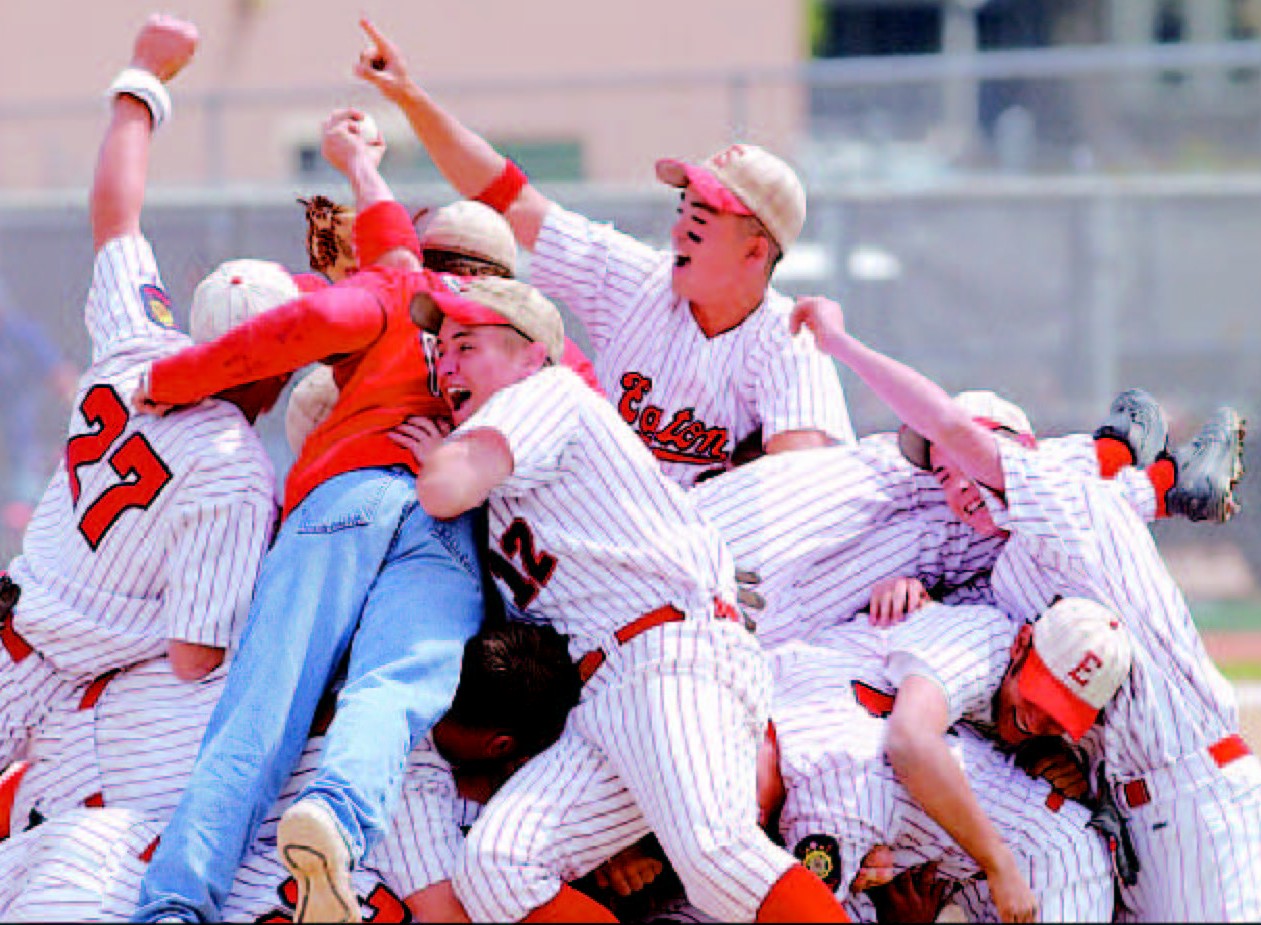 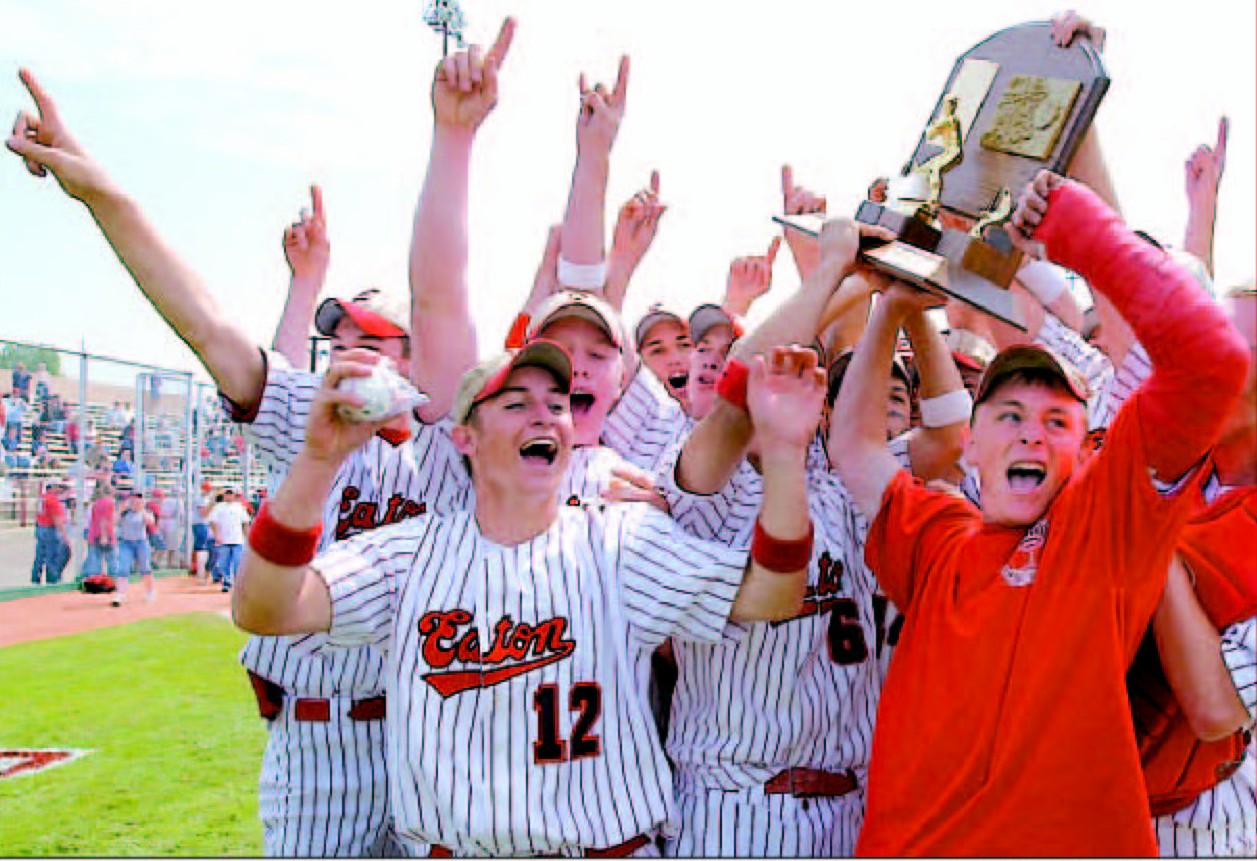 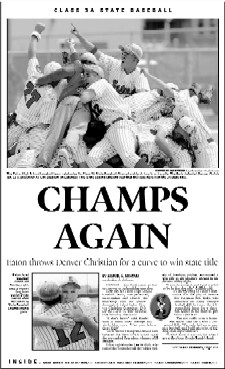 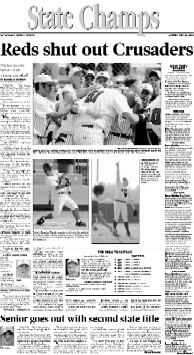 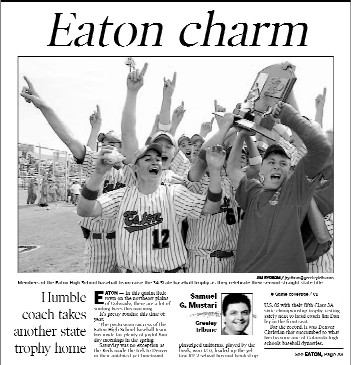 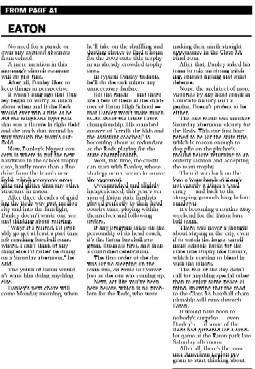